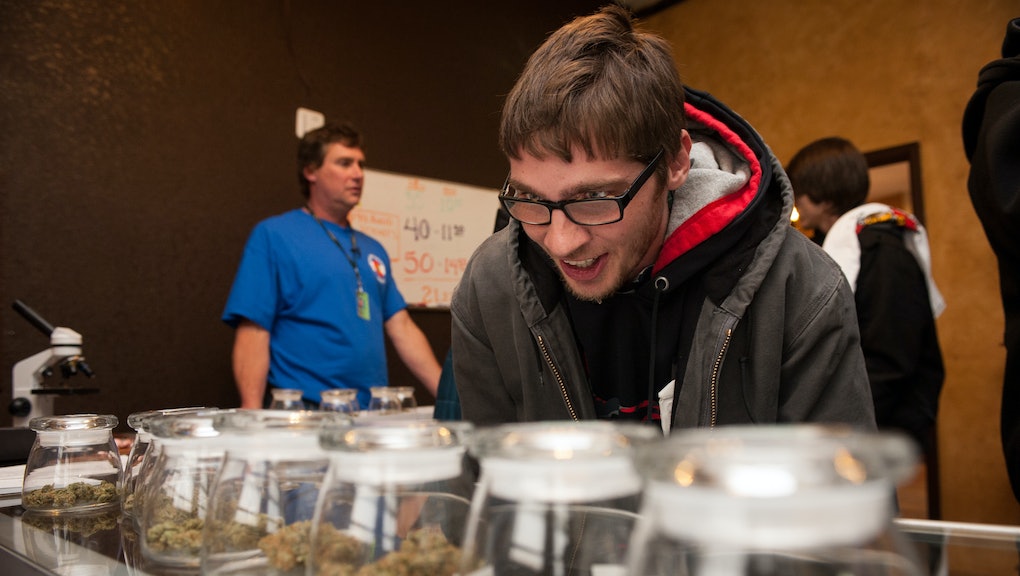 It's a ritual any seasoned pothead is familiar with: an enthusiastic dealer explaining the difference between the various bags of weed they've brought.

The indica will chill you out. The sativa will pump you up.

Or so you thought!

A study by Canadian researchers published in PLOS One compared genetic analysis to online information about common weed strains and found your dealer might not know what they're talking about.

The chart below shows the genetic composition of each strain as determined by the scientists (sativa in red, indica in blue) compared to the reported percentage of sativa and the street name of the strain. As it turns out, users should be pretty skeptical of whatever they're told they're buying.

That's assuming the weed is actually correctly labeled. In the black market in the United States, verifying this information might be close to impossible — an issue that carried over to the scientific samples the researchers used to reach their conclusions.

"This observation suggests that C. sativa and C. indica may represent distinguishable pools of genetic diversity but that breeding has resulted in considerable admixture between the two," the researchers wrote. "While there appears to be a genetic basis for the reported ancestry of many marijuana strains, in some cases the assignment of ancestry strongly disagrees with our genotype."

"Our results suggest that the reported ancestry of some of the most common marijuana strains only partially captures their true ancestry."

The study didn't delve into whether users' self-reported experiences with various types of weed are merely anecdotal, though High Times has previously written skeptically on the difference between ingesting either strain. Some research suggests the quantity and type of a group of organic compounds named terpenes are responsible for the difference in effect. Various other factors like the way the plant is grown also play a role.

The researchers noted other research has found similar "misclassification" even in retail settings like Dutch coffee shops, indicating even people with full-time jobs selling marijuana aren't necessarily more knowledgeable about the genetic background of their swag.

In other words, if it takes a team of scientists to find out what you're really putting in your pipe and smoking, then your dealer (and self-declared weed connoisseurs) probably don't know, either. But seeing as the difference between the two strains is debatable anyhow, it might not matter for the average stoner.

More concerning is the possibility that federal prohibitions on marijuana and onerous restrictions on weed research will obscure the potential therapeutic uses of either strain. The genetic analysis also provided more scientific evidence that hemp is genetically different than the kind of weed that gets people high, which could one day help end the similarly poorly thought out federal ban on hemp production.