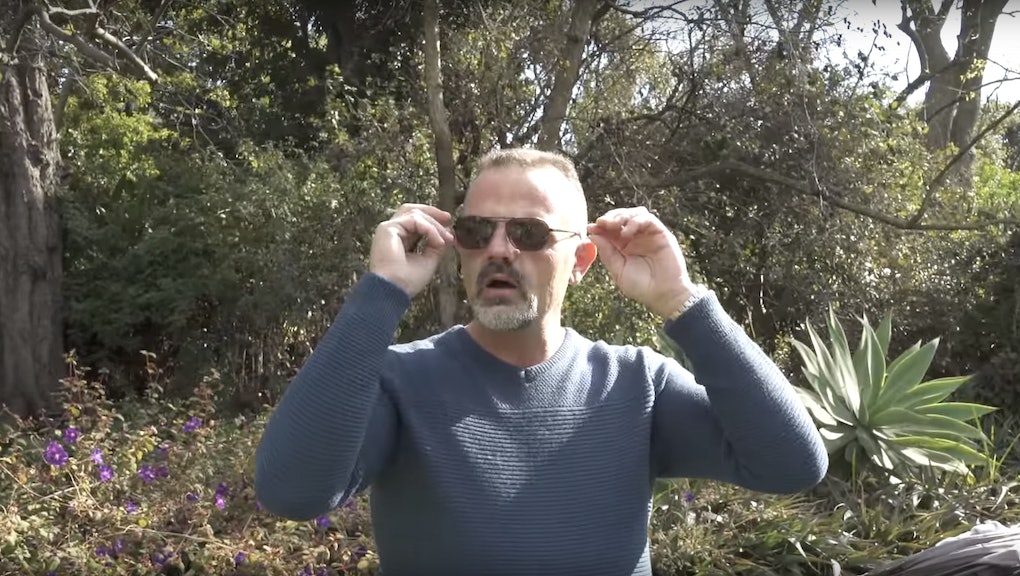 That's Tyrone, a colorblind Australian man, reacting to his first experience with a pair of EnChroma glasses — eyewear designed to enhance color vision.

According to the video, Tyrone's a "genuinely awesome guy," a photographer who loves people and beauty in nature.

After Tyrone's eyes adjust to the glasses and the more subtle colors begin to show up in his vision, his friends take him on a walk through what looks like a botanical garden.

Teary-eyed, Tyrone leans in close to colorful plants, asking what different colors are the whole time. "I can actually see the flowers," he says. "[They're], I think, purple. I don't know what colors look like, really."

So how do these glasses work? Basically, they help colorblind eyes receive light correctly. The eye has millions of retinal cone cells, each falling into the category L (red light), M (green light) and S (blue light). When all three varieties are healthy, colors are balanced. In most cases of colorblindness, one of the three is absorbing more than its share of light, resulting in colors blending together incorrectly and creating false colors. A rarer version, called monochromacy, occurs when a person is missing two of their cone types and causes blurry images that come only in black, white and gray.

The reason you usually hear about "red-green colorblindness" is because red and green light tend to be close to each other, often resulting in an overlap. Fortunately, 99% of colorblindness cases are based on this problem, which is exactly what EnChroma is designed to fix. The EnChroma lenses have a "band of absorption" that captures the light, separating the cones enough for the eyes to receive the light correctly. As Smithsonian.com reported, the glasses have treated up to 80% of the people who tried them.

"What color is your shirt?" Williams-Mele asks the friend videotaping him.

"It's a blue but it looks kind of green," he replies.

"It's a lot different than what I always thought [it would look like]," Williams-Mele responds, tearfully, behind thick-framed glasses.

There's even a new subreddit called /r/EnChroma Reactions, which acts as a gallery for the videos.

What's next: The technology can't fix larger color problems, like missing entire classes of these pigment cones. But the EnChroma team is working hard to develop an indoor model and a model for children, which could help colorblindness from getting any worse. And while the company isn't addressing the matter yet, contact lenses using its technology could allow those with colorblindness to see color without glasses. And if these videos are any indication, EnChroma would find a market eager for them.