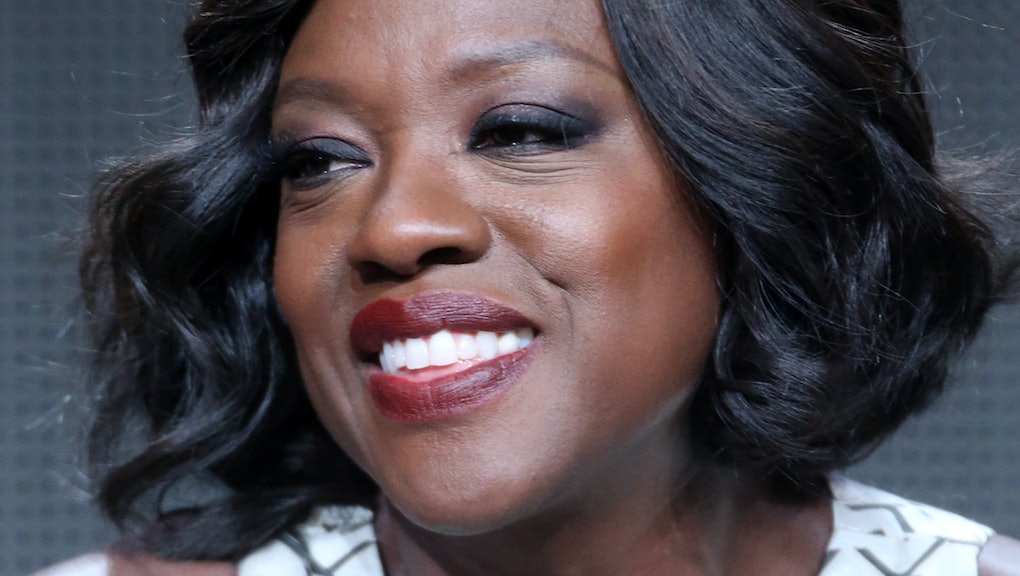 Viola Davis is one of a handful of black women to star in her own network TV show. But the 50-year-old How to Get Away With Murder actor maintains a biting critique of Hollywood sexism and racism, and much of it hinges on how black women's sexuality is portrayed.

In a recent interview with Entertainment Weekly, Davis explained how her HTGAWM character, lawyer and professor Annalise Keating, is one of the few examples she's ever seen of a dark-skinned, middle-aged black woman who is allowed to be sexual in a mainstream television show or film:

"There were lot of things that people did not allow me to be until I got [the role of] Annalise Keating. I was not able to be sexualized. Ever. In my entire career. And here's the thing that's even more potent: I've never seen anyone who even looks like me be sexualized on television or in film. Ever. When people say they're tired of hearing that, I always say, 'Okay, well, you give me an example and then I'll stop talking about it. But I'm gonna talk about it until you hear it.'"

Background: Davis has endured more than her share of Hollywood's troubled relationship with black women.

When New York Times critic Alessandra Stanley referred to the actor as "less classically beautiful" in an article about showrunner-producer Shonda Rhimes last year, it encapsulated a long history of mainstream narratives that frame black femininity as inherently undesirable.

Part of the appeal of Rhimes' TV shows, including Grey's Anatomy and Scandal, as well as HTGAWM, is that they present their characters of color as complex, three-dimensional human beings instead of token caricatures. In Davis' case, this means depicting her character's sexuality as a natural and unabashed extension of her humanity — something Hollywood has been loath to consider when it comes to middle-aged women period, let alone middle-aged black women with dark complexions.

"Sexualized": At the same time, there is also a more demonizing history around black women and sexuality, both off- and onscreen. Writing at Alternet, Edward Rhymes explains:

"Although all women who were viewed or accused as loose or promiscuous faced the ire and consternation of a (predominantly white) male-dominated society, there has always been this duplicitous racial application of the penalties incurred for committing perceived 'moral' crimes against society. Historically, white women, as a category, have been portrayed as examples of self-respect, self-control, and modesty — even sexual purity — but black women were often (and still are) portrayed as innately promiscuous, even predatory."

Considering how black women's sexuality has also been framed as pathological, the ways that black women do get "sexualized" onscreen — a term that Davis employs liberally — have also been critiqued as exploitative. There is a difference between displaying women as titillation for male viewers versus agents of their own sexual needs and desires, as Keating is in HTGAWM.

It's a difference that the entertainment industry has failed to get right across the board — and not just with black women, thought it intersects for them in different ways.

On the cusp: Davis' critique also comes during what some see as a banner era for racial diversity in Hollywood. Television networks such as ABC are investing in diverse programming with renewed vigor. A yearly study conducted by the Ralph J. Bunche Center for African American Studies has repeatedly showed the financial benefits of racial diversity onscreen, not to mention how far the industry still has to go in creating products that reflect the diversity of the American public.

Davis' and Rhimes' work on How to Get Away With Murder is but a small portion of this ever-expanding picture. The show's second season is slated to premiere Sept. 24.