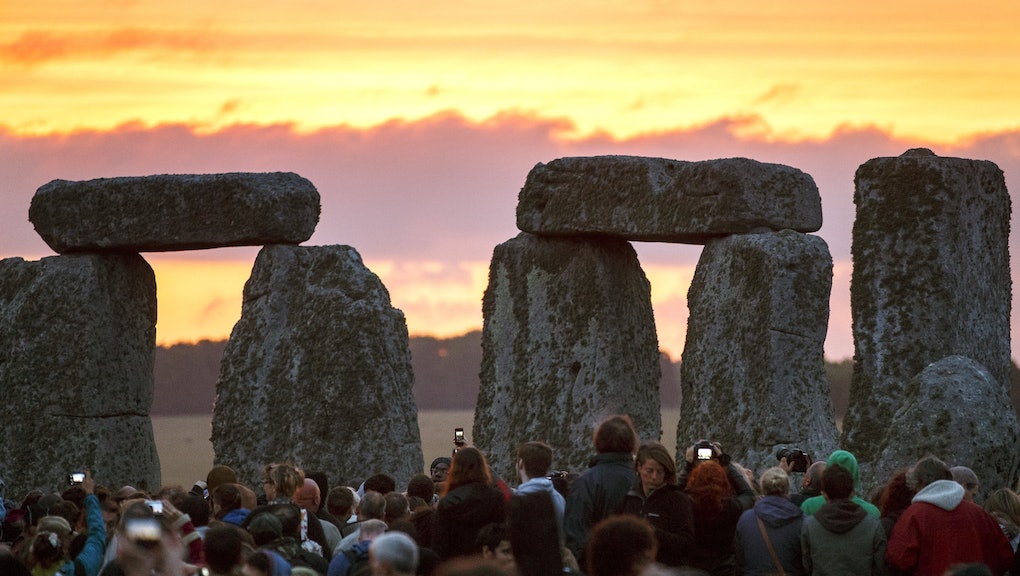 Archaeologists recently discovered a stone monument that's among the oldest and largest of its kind in Europe, which sat unexplored for millennia just two miles from England's famed Stonehenge. Researchers counted up to 90 large standing stones similar to those that make up Stonehenge and dubbed the site "superhenge," a testament to the sheer size of the previously unknown monument.

"We're looking at one of the largest stone monuments in Europe, and it has been under our noses for something like 4,000 years," Vince Gaffney of the University of Birmingham told Discovery News. "We don't think there's anything quite like this anywhere else in the world. This is completely new and the scale is extraordinary."

The stones were buried under the Durrington Walls, a Neolithic settlement within the Stonehenge World Heritage Site in Wiltshire. The monument was likely assembled about 4,500 years ago, predating Stonehenge by about 1,000 years.

Artist renderings show what the standing stones of "Superhenge" would have looked like:

Gaffney announced the new finding at the British Science Festival, which opened this week. The research was part of the ongoing Stonehenge Hidden Landscapes Project.

Archaeologists used ground-penetrating radar to reveal the row of stones, which form a kind of curved arena. The monoliths, which once stood upright, lay horizontal and were probably toppled and buried on purpose, according to archaeologists. Each stone measured up to 15 feet in length, Discovery News reports.

"Not only does this new evidence demonstrate an early phase of monumental architecture at one of the greatest ceremonial sites in prehistoric Europe, it also raises significant questions about the landscape the builders of Stonehenge inhabited," writes the Ludwig Boltzmann Institute for Archaeological Prospection and Virtual Archaeology, which co-led the research.

Researchers said ancient people probably used the monument for rituals or as an arena, and that its discovery was helping shape archaeologists' understanding of Europe's Neolithic past.

"The extraordinary scale, detail and novelty of the evidence produced by the Stonehenge Hidden Landscapes Project, which the new discoveries at Durrington Walls exemplify, is changing fundamentally our understanding of Stonehenge and the world around it," archaeologist Paul Garwood said in a statement. "Everything written previously about the Stonehenge landscape and the ancient monuments within it will need to be rewritten."