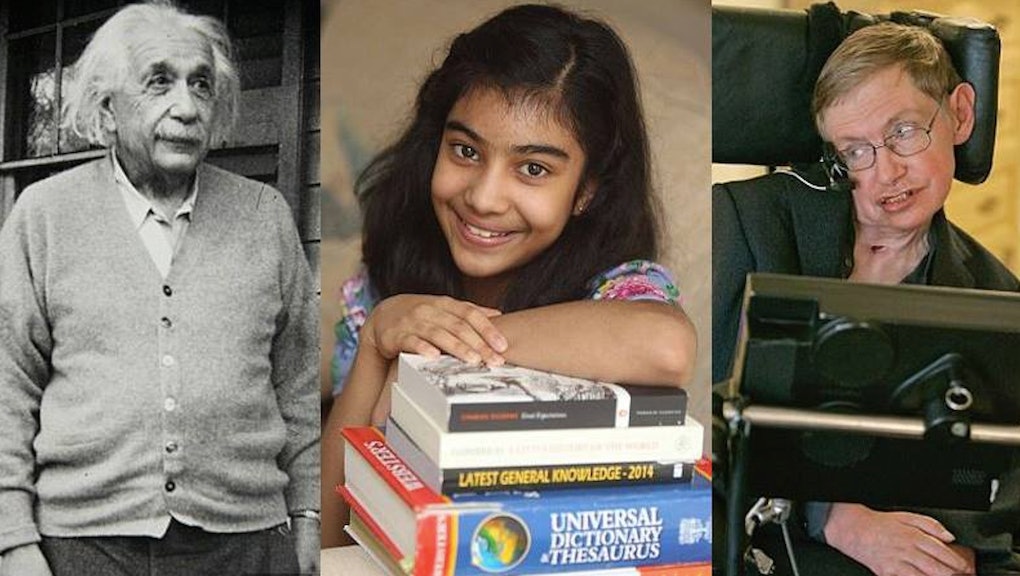 In life, there are smart kids, and then there is Lydia Sebastian.

After being inspired by television quiz shows, the 12-year-old from Essex, England, decided she wanted to measure her own intelligence. After searching online, the precocious preteen came across Cattell III B. The exam is one of two qualifying tests for the English chapter of the high-IQ society MENSA. After persistently needling her reluctant parents, Sebastian sat for the test in last August and walked away with a perfect score, or a measured IQ of 162.

To be fair, while Einstein or Hawking are not known to have taken Cattell III B, it's hard to do better than perfect. The two men are estimated to have IQs of 160.

"We were surprised by how well she did," her father, radiologist Arun Sebastian, told Mic. Speaking from England's Colchester General Hospital, Sebastian said his daughter was a normal student at Colchester County High School for Girls. "I couldn't quite believe it," he said of his daughter's score "I did a double-check."

There were signs, however, that the younger Sebastian was not just an average student. According to her father, Lydia began talking at six months and is an avid reader, when studies show reading for pleasure has declined significantly among younger people. Still, Sebastian has no plans of turning his daughter into a super-child spectacle.

"My personal view is that when a child does things out of her age group, she may miss out on other things in life," said Sebastian. "We are hoping she will just carry on in school the way she is."

Child prodigies like Sebastian are rare. Joanne Ruthsatz, a researcher on gifted children and professor of psychology at Ohio State University at Mansfield, estimated they emerge in roughly 1 of every 5,000 to 10,000 children, Ozy reported. Despite this, Sebastian is not the first child to ace the exam this year and in fact is not even the first from Essex, which sits next to London. In July, Nicole Barr, also from the county, logged a perfect score, while Aahil Jouher was just 10 years old when he also accomplished the feat.

For now, however, Sebastian's insistence that his daughter fulfill age-appropriate milestones likely rules out any stories of college graduation in the immediate future. "She doesn't really know exactly what she wants to do," he said.

But when the younger Sebastian does figure out what she wants from her life and career, the odds are that she'll be pretty damn good at it.