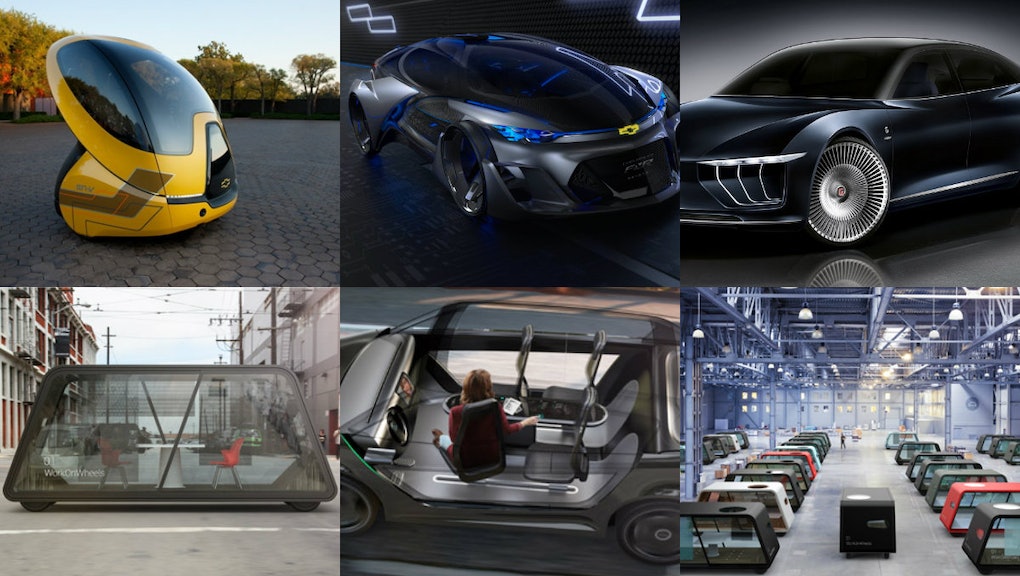 These Are the First Designs for the Future of Driverless Cars

When Google unveiled its tiny, self-driving car in 2014, we got a glimpse of a world where happy-looking machines take the steering wheel, turning all humans into backseat drivers.

These cars let anyone pilot and navigate with just a few taps of a screen. They'd let people with blindness, disabilities, physical handicaps or even children drive independently. Best of all, they have the potential to save millions of lives.

Google's initiative begs the question: If tech companies are ushering in the future of driverless cars, are major auto manufacturers like Ford and GM going to follow suit? After all, these companies are poised to hit the ground running. They have the manpower and industrial capacity to design and mass-produce enough vehicles to fulfill the futurists' vision of a world without car ownership.

As it turns out, they've been hard at work trying to catch up, designing concept vehicles and putting together mockups of what those cars might look like when they arrive.

The Mercedes-Benz F 015 is the most realistic concept — but it looks a little strange.

The interior may look jarring; most of us aren't used to cars whose seats face each other. But the F 015 — like other cars in this lineup — trades the space you'd usually use to give the driver comfortable steering space for a gorgeous indoor experience, like being in a small, cozy room.

It's like being in the back seat of a limo that has no front. It's got nifty, futuristic control panels. And if you're riding solo, it also looks harrowingly lonely.

The Chevrolet-FNR is a self-driving Batmobile.

Chevy's latest pass at a self-driving car shows the absolute extremes of futurist design principles. And like other cars from auto manufacturers who are convinced that drivers will never want to give up their ability to take control of the car, the FNR can go fully manual, with a swiveling driver's seat.

The design looks like Bruce Wayne's ride or something out of Tron. It's less likely to be the standard look compared to the more bare-bones designs that take after Google's first model. Concept cars from major manufacturers have always been ostentatious.

Chevrolet's EN-V is like a praying mantis on wheels.

The EN-V started as a concept for a simple, energy-efficient electronic vehicle, like a battery-powered smart car. As self-driving cars started to make weekly news — whether it was Apple's copy-cat project or Uber's plans to replace all their drivers with cloud computing — the EN-V has been slowly billed more and more as a self-driving, autonomous vehicle.

Call this the first-ever self-driving retrofit: The imaginary car is now even more futuristic.

When design firm IDEO looked at the future of self-piloting vehicles, it didn't stop at cars. After all, if there's a computer at the helm, why not put an entire office on wheels? Or entire storage units?

The Future of Automobility project theorizes three separate vehicles: a car, a package-delivering "mule" car and a "work on wheels" pod that serves as a mobile office and meeting space.

"While not intended as literal vehicle concepts ready to ship," IDEO executive design director Danny Stillion told design blog Dezeen, "the range of concepts is intended to help us think about what life would be like with them in our lives, and to provoke further thinking about the kind of broader solutions we will have to work together on to solve our future mobility needs."

AKKA link&go 2.0 was one of the first, if not definitely the ugliest.

Two months before Google unveiled its smiling vehicle, consulting firm AKKA Technologies rolled out an early look of the future of self-driving cars, setting an early example of what to expect. It built a prototype for the Geneva Motor Show, and even if it's only a concept, AKKA gets points for being early to the game.

But if the future of self-driving cars isn't going to look like the glitzy Chevy mockups, we can hope that it won't look as boxy and absurd as this one.

The Italdesign Giugiaro GEA wants to be the first driverless status object.

Self-driving cars aren't even on the road yet, and already we have high-end prototypes like Italdesign's Guigiaro GEA making the rounds at trade shows. Leave it to the Italian car to amplify the feeling of luxury.

Unfortunately, the idea of self-driving seems secondary to the car's other flashy amenities and luxury features — less a vision of future possibilities than a technological reimagining of the chauffeured town car. After all, no one ever drove their own Rolls-Royce.