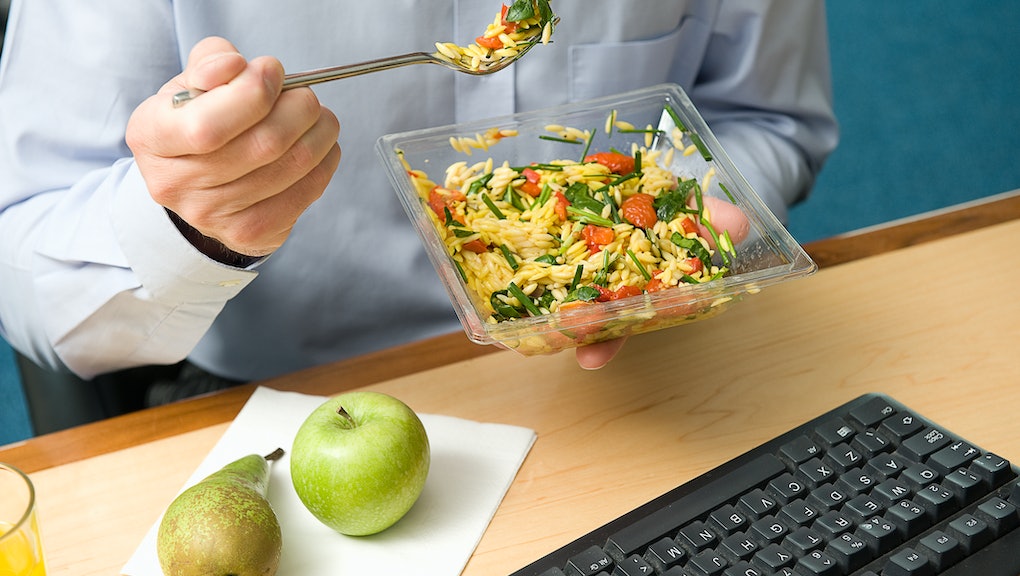 It's Time to Bring Back Lunch, Dammit

I am sitting at my desk at 12:06 p.m., a kale and cranberry salad on my left and a lukewarm iced coffee on my right.

The salad is untouched, and will likely remain so for the next few hours while I answer emails, attend meetings, edit posts and Slack with colleagues about Zac Efron. At 3:30 or so, I will likely shovel a few wilted leaves into my mouth, splattering balsamic vinaigrette all over my keyboard, holding a fork with one hand and trying to type "has zac efron shown penis in movie question mark" with another.

In light of Labor Day, a national holiday in which we pay homage to the contributions of the American labor movement, we must also consider the shortcomings of said movement as well. And the reality of the average worker in the United States is unfortunately as follows: The work lunch, as we know it, is dead. It's time to bring it back.

Lunch is dead, long live lunch: Outside of the realities of the modern workforce, lunch is considered a much-needed break period, an oasis of rest and relaxation in the middle of a bustling day. In pop culture, the term conjures up images of the Sex and the City ladies giggling over salads served by waiters, or Mad Men-style liquid-heavy lunches where businessmen masticated 48-ounce steaks and guffaw about their wives' breasts.

In real life, for many people, the lunch break has been drastically condensed to a 10-minute salad run or a hasty bite of leftover pasta salad as your greasy fingers punch the keyboard. According to a 2011 human resources survey, only 33% of Americans take a lunch break, which means that nearly 65% of Americans eat their lunches at their desks, or not at all.

The lunches that are had become luxuries or, worse, signs of a less-than-rigorous work ethic. In fact, according to a 2012 California Supreme Court ruling, employers in the state aren't required to make employees stop working during their legally mandated 30-minute breaks.

That puts the onus — and guilt — on workers to carve out times in our schedules to fill our bellies, leading to many a Sad Desk Lunch, not to mention arguments between deskmates over malodorous kimchee salads.

This is a huge problem. The Sad Desk Lunch is far from universal. In fact, in many countries, a lunch break is considered a necessity rather than a luxury.

In Japan, many companies have a mandatory hour-long lunch break, in which employees are encouraged to enjoy a leisurely meal in the cafeteria without talking about work. In Spain, employees are allotted lunch breaks of two hours or more, providing more than enough time to enjoy a standard three-course meal of soup, a fish or meat dish and flan, followed by a quick mid-afternoon siesta.

As for Switzerland, wrote one writer for Vox, "If it's summer, jumping into the lake to swim with the swans is an acceptable way to spend your lunch hour. If you eat a sandwich at your desk, people will scold you."

Contrast that attitude toward midday meals in the U.S., where if you told your employer you wanted to go home and take a nap, you'd likely be met with the same reaction as if you told them you had to go take a dump.

There's plenty of evidence to suggest that taking an extensive lunch break isn't a sign of laziness; rather, it's a way to avoid stress and burnout and increase productivity. According to a 2013 study published in the journal PLOS One, people who went out to lunch reported feeling more relaxed and creative than people who ate at their desks. A 2015 study in the Scandinavian Journal of Medicine and Science in Sports echoed those findings, reporting that workers who took a brief 30-minute stroll in the afternoon felt rejuvenated, productive and more enthusiastic about their jobs.

Staying in, on the other hand, is detrimental to creativity and innovation. Plus, research shows that getting mild exercise during the workday will make you feel energized and more ready to face your duties at work.

Given that lunch breaks are beneficial to employers and employees alike, why, then, is the U.S. one of the few countries where taking a lunch break, or even just taking a breather in the middle of the day, is considered verboten?

It's likely the same reason why we're the only developed country that does not offer mandatory paid vacation time, as well as one of the few countries that doesn't legally require employers to offer paid parental leave: We live in a culture that values busyness and productivity above all else. Being too busy to step out for a grilled cheese is akin to saying that your schedule is just so jam-packed with important things you can't be bothered with something as unproductive as food.

In this context, the Sad Desk Lunch isn't just a necessity for a busy worker bee — it's a perverse badge of honor.

A way to end mustard keyboard stains, once and for all? It would be easy to say that the way to end the "no lunch" tyranny would be to simply start taking lunch. That doesn't have to mean taking a page from Spain's book and having catnaps at home after leisurely meals of fish stew and chorizo.

It might just mean taking a few minutes every day to leave your phone at your desk and stroll outside for a sandwich or just a walk — no Googling or emailing allowed.

Even if you can't find the time, know this: Lunch is not a luxury. Your combo soup and salad is a human right as inalienable as access to food or clean water or Googling the outline of Zac Efron's dick. There is a workers' revolution nigh, set to the soundtrack of our clattering keyboards and rumbling bellies. This revolution will be seated, and it will be held at Potbelly's.