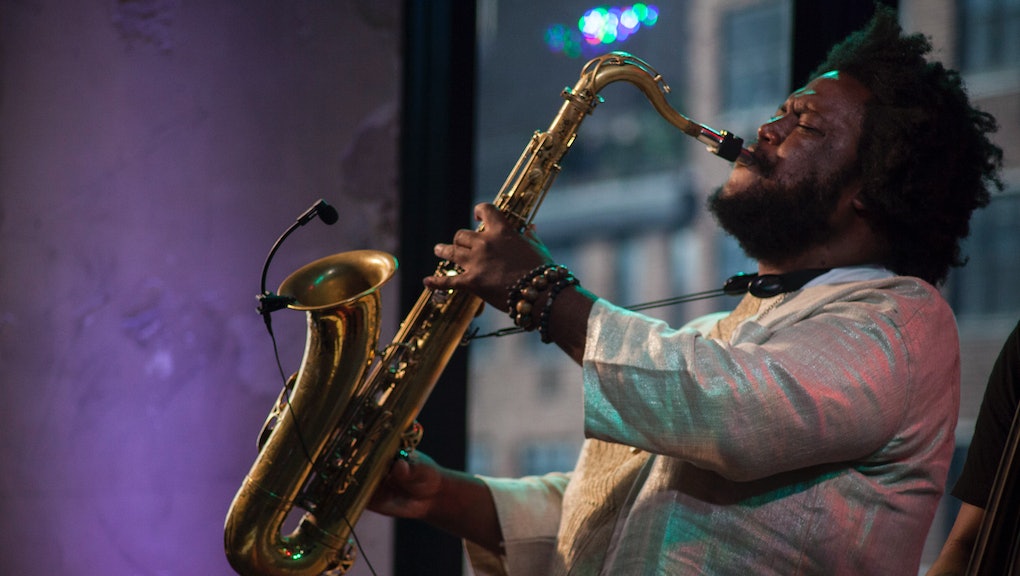 Kamasi Washington believes genres are doomed. If asked to classify the music he makes, he will reluctantly say "jazz," but the term cannot possibly describe everything his music is or will become.

"Genres are just words we use to organize the music. They don't limit the music," Washington told Mic. Hardcore music fans have always known this, he says, but with the advent of Spotify and access to the infinitude of the world's music, everyone else seems to be coming around. Washington is helping us all realize how sweet genre fusions can be.

The blend of jazz, funk, soul and hip-hop saxophonist Washington crafts is gradually becoming one of music's most sought-after sounds. He still operates largely behind the scenes, but his name appears throughout the liner notes of Kendrick Lamar's recent To Pimp a Butterfly, helping craft those lush soundscapes. Washington also worked closely with Flying Lotus and Stephen Bruner, aka Thundercat, on their latest records.

Every release Washington has been a part of — including his own, which received rave reviews for pushing "its own form of radicalism," according to Pitchfork — has helped break down stereotypes telling the world what jazz and hip-hop can and cannot be. Yet Washington sees his works as only the crest of a much larger wave. Everything we know about music is changing, and his music provides answers as to what the future will bring.

Washington believes there's a new thirst for adventurous, cord-cutting music. Washington said it's not uncommon for people to come up to him after his shows to ask him if what he played was jazz.

"It doesn't matter what you call it," he said. "What matters is: Did you like it or not?"

His debut album is The Epic, an appropriately titled mystical 3-LP instrumental epic which will see a vinyl re-release on Oct. 2. It's an explosive mix of late Coltrane-era jazz, mixed with some sultry R&B songwriting elements and classical harmonic textures. None of it feels like a safe throwback, though; he's ambitious, and nowhere are Washington's future-focused goals more apparent than during his live set.

His band, the Next Step, features a high-energy rhythm section made up of two drummers, Tony Austin and Ronald Bruner, and often two bassists, Miles Mosley and Stephen Bruner, who use a battery of effects to turn their instruments into a intriguing barrage of distorted voices.

Washington has known most of the individuals in his band since high school, including the Bruner brothers, where they all grew up together playing jazz in a band called the Young Jazz Giants. After one album, they put the project aside, and Washington began touring with the backing bands of a wide variety of acts, including Snoop Dogg, Lauryn Hill, Raphael Saadiq and Chaka Khan.

The tours helped Washington develop his chops and style but didn't provide the creative outlet for which Washington was looking.

Washington demanded more out of music. Nothing Washington played with Snoop Dogg or any other acts was that technically complex, though it had a ton of style. He insisted to Mic that for the past decade, record executives and songwriters have conflated the two. It's not the simplicity of the music that makes a song great; it's the strength of the expression.

"I can't tell you how many I've been told working on someone's album, 'Don't make it too musical,'" Washington said. "People have bought into this idea that they don't like anything that doesn't have a four-bar loop. But I've never believed that people are less intelligent now than they were in the past."

Watching Thundercat's 2013 album Apocalypse garner rave reviews inspired Washington to try his hand at writing his own. Meeting Kendrick Lamar and working on To Pimp a Butterfly alongside fellow jazz musicians Terrace Martin and Thundercat offered another breakthrough moment. It confirmed to Washington the world was ready for something more complex than simple pop phrasing.

"[Lamar's] album is so lush," Washington said. "It essentially dispelled this myth that the masses can't comprehend music that's not very, very, very simple ... Harmonically, rhythmically, texturally lyrically — there's so much going on in his music, more so than any hip-hop I've ever heard."

"What he's done, he's opened the door for musicians," Washington said. "Now we have to run through it."

Washington believes he has an obligation to challenge listeners to listen more deeply into their music. He's spoken in several interviews about using his music to combat what he calls the "dimming of the mind."

"It comes from people not challenging their minds," he said. "That's what your mind wants, like any other muscle in the body. If you don't use it, it gets weak. I think that people are starved for something — not something that challenges the mind unnecessarily but expresses an idea that it can play with for a while."

Lamar's To Pimp a Butterfly and Washington's The Epic both provide that wealth of stimulation to keep listeners coming back to dive deeper and deeper. Judging by the success of both albums, there will likely be a lot more music reaching for harmonic, lyrical and rhythmic complexity in the near future, and it may all trace back in part to Washington and The Next Step.