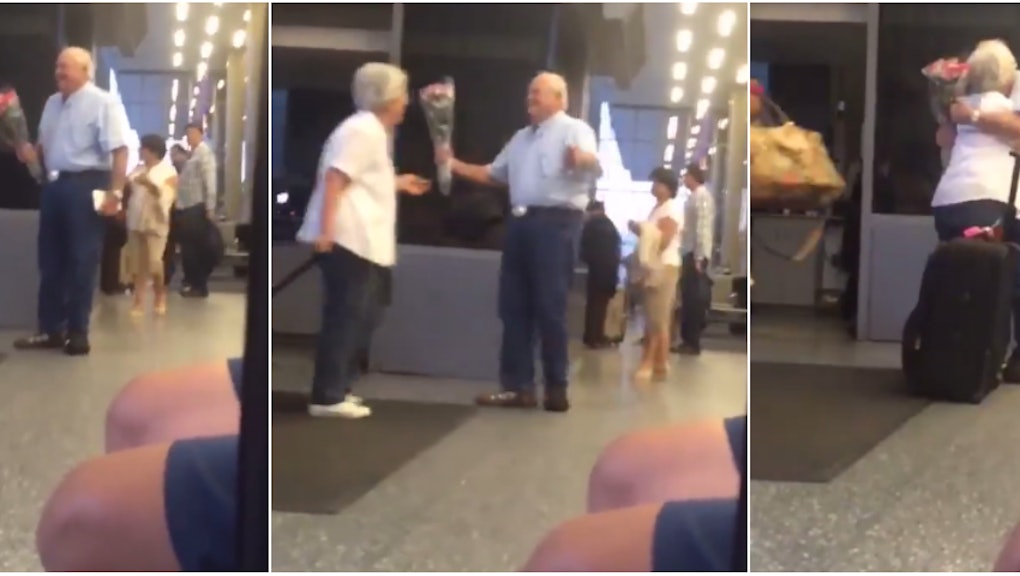 Such are the ingredients of Facebook's latest viral video, in which an elderly man anxiously awaits the arrival of his wife at a busy airport, only to become visibly overjoyed once she appears from stage left:

The clip was uploaded on Monday by Facebook user Chris GQ Perry, a musician in New York, who told Mic in an email that the original video was sent to him by a friend. "She doesn't personally know the couple," he said. "But she said the man was waiting over an hour for his wife to arrive, and he was very anxious."

But then, a twist! According to Perry, the couple came across the video on Facebook and reached out to him in a separate email. In the message, the couple identified themselves as Bernie and Carol (aww) and wrote that they found the Internet's response "absolutely amazing."

"We were both married 50 years and our partners passed away," the email read, before stating that they met via E-Harmony in 2008 and were married in 2010. Of the airport encounter, Carol said that she "had just traveled to Delaware for a wedding of one of my grandsons and was gone for almost two weeks. It was the first time we had been separated.

"Obviously, we missed each other very much."

Of course, past experience tells us that such perfectly-suited-to-be-viral stories like this are not always legit. (Perry has yet to respond to Mic's request for the contact information of his friend or the couple in the video.)

But we all want to believe that one day, we'll meet someone who's just as excited about seeing us as Bernie is about Carol. So let's just all close our eyes and say a silent prayer that our future relationships will be even half as passionate as this couple's seems to be.