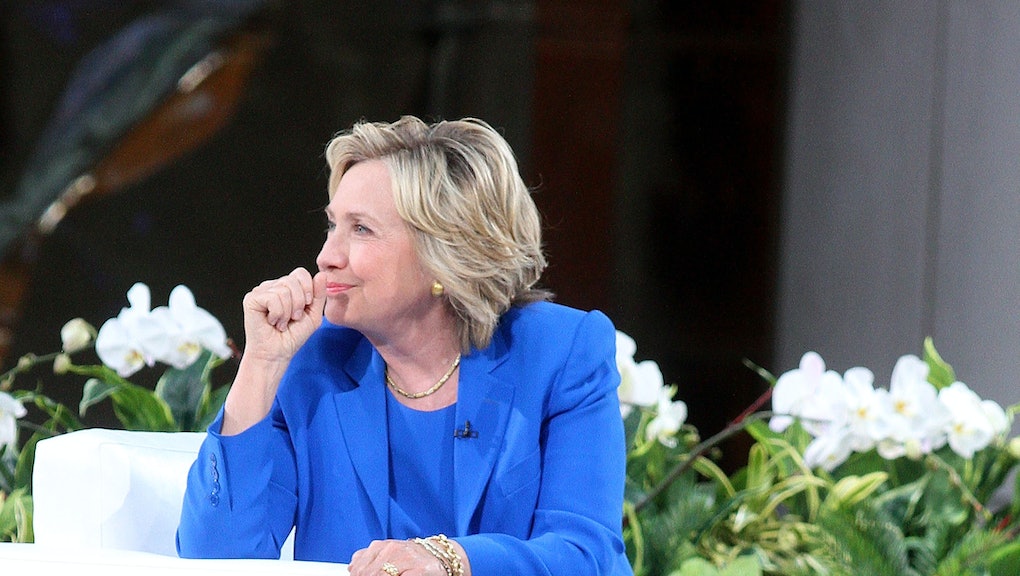 It's official: Hillary Clinton is sorry she used a private email server during her tenure as secretary of state.

On her third attempt in five days, Clinton on Tuesday night finally delivered a firm apology for both the decision and, implicitly, the potential harm it's caused the Democratic Party and her campaign.

In an interview with ABC's David Muir, Clinton called her decision to mix private correspondence with public business on a single, nongovernment account a "mistake."

"I do think I could have and should have done a better job answering questions earlier," she said. "I really didn't perhaps appreciate the need to do that." Still, Clinton maintained her behavior was "above board" and in accord with the law at the time.

Her comments followed two unsuccessful attempts to stem the controversy and refocus attention on a series of recent policy rollouts, including Tuesday's pitch for a modest new round of campaign finance reform.

But if history is any guide — and with the Clintons it tends to be a reliable roadmap — the email scandal is destined to remain a point of debate throughout the 2016 campaign cycle. Though the particulars are new and still quite murky, the broad strokes of the matter bring to mind Clinton's 2008 bid and its tortured grappling with her 2002 vote as a senator to authorize military force in Iraq.

The long road to sorry: If President Barack Obama's early opposition to the invasion of Iraq launched his national political career, Clinton's decision to back then-President George W. Bush's request for authority to use force against Iraq doomed her presidential ambitions.

By 2007, when she and Obama began their primary marathon, the Iraq War had become a bloody, costly shorthand for the cavalier excesses of the Bush administration. The 2006 midterm elections, in which Democrats seized control of both chambers of Congress, were widely viewed as a tipping point in the country's rejection of Bush and the war.

Yet when Clinton hit the campaign trail early the next year, she refused to apologize for her vote or concede it had been an exercise in poor judgment. Her response was actually most akin to what some Republicans say today — that knowing what she knows now, she would not have voted the same way.

But in early 2007, Clinton was downright provocative when asked, at an event in New Hampshire, about her decision.

"If the most important thing to any of you is choosing someone who did not cast that vote or has said his vote was a mistake, then there are others to choose from," she said then, according to a New York Times account of a tense stop in Dover.

Conflicting advice? To the credit of Clinton and her newer, more social media savvy aides, she has come around to making public amends in a more timely fashion in 2015. She did not offer a definitive mea culpa for her Iraq vote until 2014, in her memoir Hard Choices.

"I thought I had acted in good faith and made the best decision I could with the information I had," she wrote then. "But I still got it wrong. Plain and simple."

Like in her book, Clinton on Tuesday did still manage to project her discomfort with the zero-sum nature of the surrounding debate. Rather than concede, as logic dictates, that she set up her private email server to forge a degree of privacy from public scrutiny, she maintained the position that her only motivation was convenience: The account existed solely, Clinton has said repeatedly, for the purpose of allowing her to carry a single mobile device.

For someone who emailed subordinates asking them to tell her when her favorite TV shows aired, that explanation simply doesn't ring true. Voters might not prioritize trustworthiness in their elected leaders, but even Clinton's staunchest supporters couldn't possibly believe there wasn't a staffer available to juggle the secretary of state's two (or even three!) smartphones. Indeed, most high level political officers or candidates employ staffers whose duties include just that. (See: "Gary" on HBO's Veep.)

There were other moments, even in the ABC News interview, that seemed to underline the candidate's fundamental distaste for conceding even the most obvious point without offering an exonerating caveat.

"Everybody in the government I communicated [with], and that was a lot of people, knew I was using a personal email," Clinton said Tuesday, before pivoting to the long-awaited apology.

"But I'm sorry that it has, you know, raised all of these questions. I do take responsibility for having made what is clearly not the best decision."