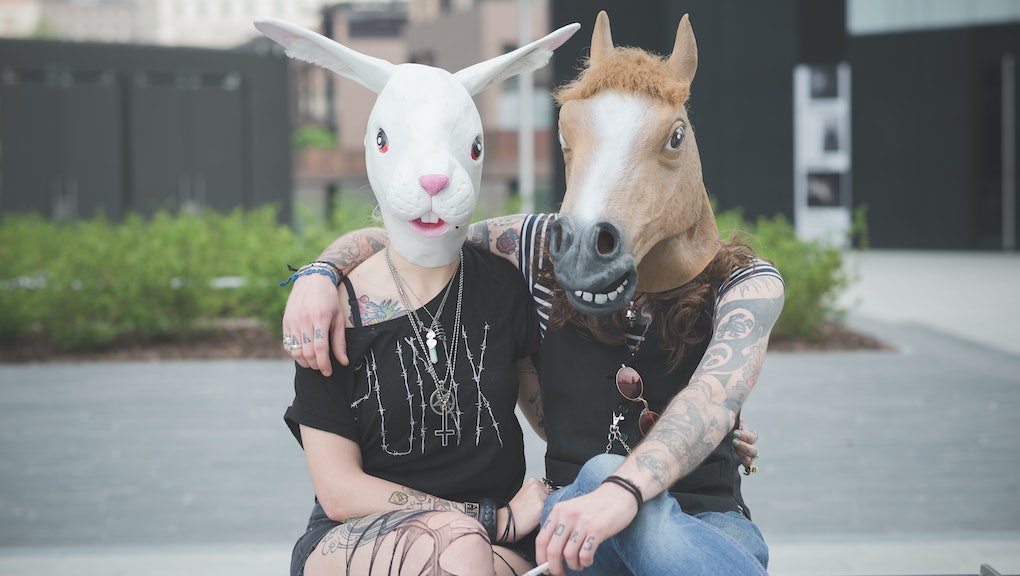 First dates might as well just be called the "Look at how not-weird I am!" Olympics.

We spend hours picking out the perfect outfit. We fret about saying the wrong things. We put our best selves forward to ensure we make a good first impression — even if our actual day-to-day selves are snorting-while-laughing, junk-food-binging, Netflix-addicted, compulsively farting weirdos.

While getting truly gross is probably better for later stages of a relationship, research suggests that trying to be overly normal while dating is actually counterproductive. It turns out that letting it all hang out on a first date can actually be the secret to dating success.

Conforming is con-boring: In a study published in the Personality and Social Psychology Bulletin earlier this year, researchers at the University of Queensland in Australia carried out an experiment to determine if straight daters preferred "conformist" or "nonconformist" partners.

Their initial assumption was that women would be drawn to quirkier, stronger, nonconforming dudes, while men would respond more positively to more conventional women with no obvious quirks. (In short, Stepford Wives-esque basic bitches.) This hypothesis was steeped in the enduring gender stereotype that women are more attracted to personality, while men are more attracted to looks.

The results of the study, however, told a different story. Both men and women were more attracted to nonconforming folks of their preferred gender. Furthermore, researchers found that "women overestimated the extent to which men prefer conformist partners."

Letting your freak flag fly on the dating scene might feel a little counterintuitive. We spend an awful lot of time trying to present the best versions of ourselves while we're dating. Research from 2011 determined that a whopping 81% of online daters misrepresent themselves on their profiles, whether it's by fudging their age or claiming to be interested in activities that they don't actually partake in. "Daters lie to meet the expectations of what they think their audience is," the study's author told the New York Times.

And yet, contrary to popular belief, trying to appear normal on, say, an online dating site is the exact type of behavior that will probably make other users say, "Meh. Next." For instance, consider this study out of the University of Iowa, which determined that the most appealing thing in an online dating profile was authenticity. Sorry, generic profile-havers who identify as "witty" and "into traveling" and "always down for an adventure": That lady who moonlights as a furry and that dude who writes lovingly of his fanatical James Bond memorabilia collection are probably getting more messages than you.

Striving to keep conversation bland and unoffensive on the date itself can be just as counterproductive as having a bad profile. In fact, a 2013 study out of Stanford University and the University of California tracked feedback based on hundreds of speed-dating conversations. The researchers found that wishy-washy phrases like "kind of," "sort of" and "maybe" were major turn-offs. So if the conversation turns to, say, the Iran nuclear deal or how Mad Men should have ended, and you have strong opinions on these subjects, you should probably go ahead and voice them.

Garth Sundem, author of the book Your Daily Brain, says being more decisive and opinionated on a date can work in your favor. "So often when dating, we try to shape our emotions into a middle-positive zone. But dating researchers show that this makes a vanilla, forgettable date," he previously told Mic.

"Data shows that this approach is more likely than the gently positive approach to lead to a higher evaluation of the date quality, overall."

Weird is kind of the new normal, anyway. If you're asking yourself, "What does 'weird' even mean, anymore?" then you're probably not alone. In fact, these days "weird" has kind of become a badge of honor. Whether it's Zooey Deschanel starring as the "adorkable" Jess in New Girl or a BuzzFeed listicle about the "34 Weird Things Other People Totally Do Too," being "weird" has evolved from an identity to a straight up marketing tactic.

Still, there's no denying that despite the rise of weirdness, we still seem to be hardwired to suppress our most human characteristics in favor of low-risk, "normal" behaviors that we feel others will find more appealing. But research says it's time to lean into your weirdness. Wear that Jimmy Buffett shirt in your profile photo. Wax extensively about your love of Troll dolls in the "About Me" section. Then watch the matches roll in.