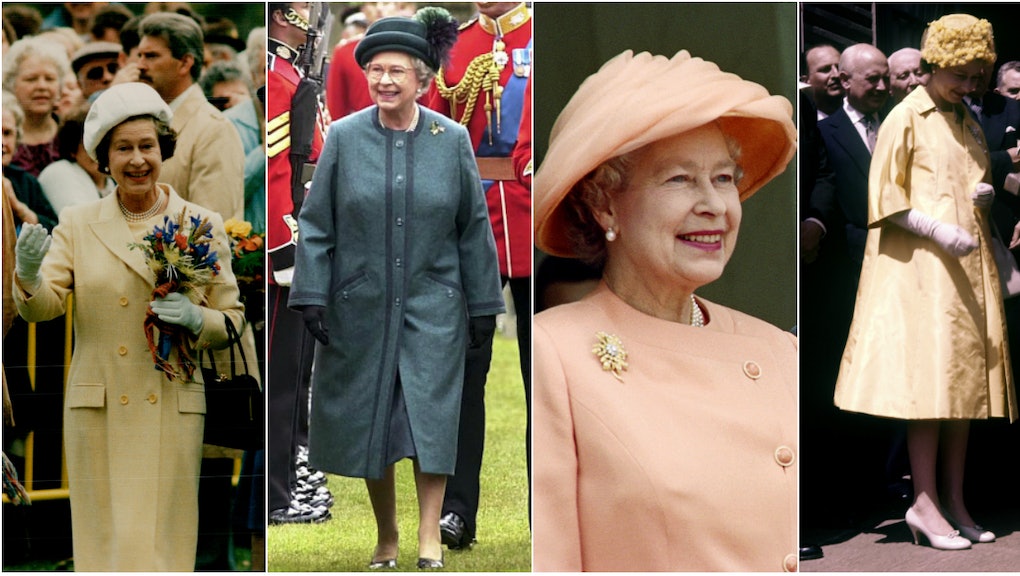 Queen Elizabeth II Is the Ultimate Queen of IDGAF Style

Elizabeth II isn't just the queen of England, the longest-reigning monarch in the United Kingdom.

Today, as the 89-year-old monarch officially accepts the honor of outpacing any of her predecessors, it's clearer than ever that she represents the ultimate in give-no-shits, stick-to-your-guns fashion. Queen Elizabeth II has officially been on the throne for 23,226 days, according to the BBC, and she's worn pretty much the same outfits all that time.

When she was crowned at age 25 in 1953, bigger, feminine skirt styles were in vogue, along with the famed Chanel suit. So true to the time, the newly-crowned Elizabeth wore many below-the-knee dresses and swingy overcoats, along with low heels and fancy hats.

And she literally hasn't stopped doing so since.

Sure, some "trendy" touches have creeped their way in, such as pussy-bow collars in the 1970s or wide-brimmed hats in the 1980s. But Queen Elizabeth has clear preferences: She likes dresses rather than skirts (they require less adjusting); she prefers black shoes with everything; and her knees never show.

"Hemlines may have risen and fallen, but the queen's skirt and dress length has remained resolutely and strictly the same," the Wall Street Journal noted in 2012.

For a role model on how to dress for you and only you, look no further than the queen of style.

When miniskirts and go-go boots were cool in the '60s, this is what the queen wore:

When bell-bottom jeans and suede fringe were trendy in the '70s, this is what the queen wore:

When the 1980s brought power suits and Day-Glo leggings, this is what the queen wore:

When grunge and plaid ruled the '90s, this is what the queen wore:

In the 2000s, an era of skinny jeans and crop tops, the queen has remained strong.