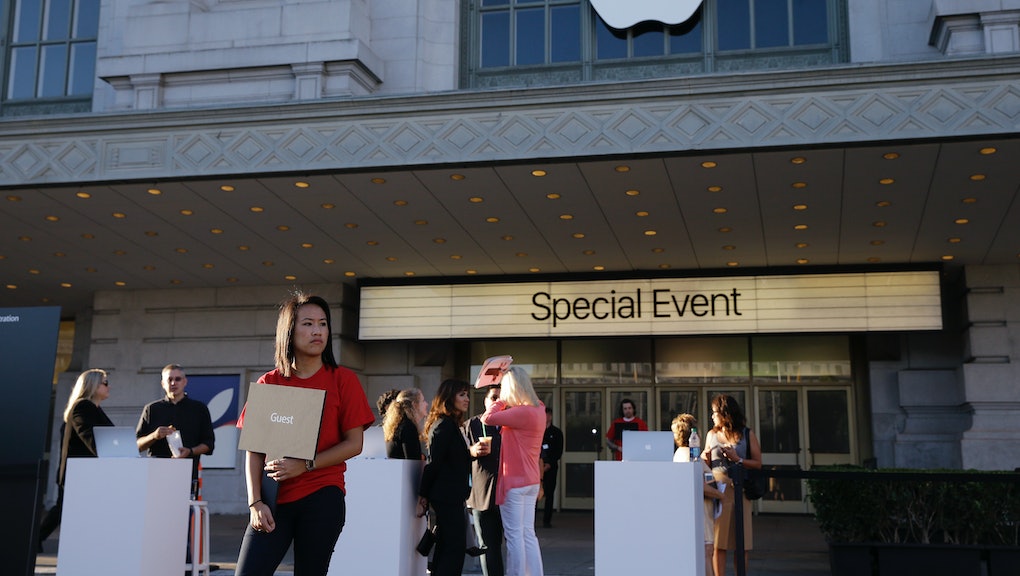 Apple's leaders convened Wednesday to announce changes to the company's flagship products, including its iPhone, iPad and Apple TV. Among the products slated for reveal were the iPhone 6S and 6S Plus, the latest iteration of the company's iPhone brand.

The major tech event, held at the Bill Graham Civic Auditorium in San Francisco, was expected to draw thousands of bloggers and Apple enthusiasts to the city to hear Apple executives speak about the company's latest changes. Apple said it would live stream the event online, including allowing Windows users to access the video stream, something the company hasn't traditionally done.

Among the rumored changes coming to Apple products are a "monster"-sized screen for the company's iPad, an improved camera and speed for its iPhone and new features, like live cable streaming, for its Apple TV.

We'll be updating this story as updates from the keynote leak, including prices for iPhone 6S and iPhone 6S Plus, iPad Pro and Apple TV.

He called it "the most capable and powerful iPad we've ever created." The new iPad Pro has the biggest screen of any iPad, measuring 12.9 inches on its diagonal. It also has more pixels than a 15-inch MacBook Pro.

The Apple Pencil: The company also revealed a new tool to accompany the iPad Pro: the Apple Pencil. Apple said the tool, which interacts directly with the iPad's screen, would provide a "true writing or drawing experience."

However, Apple's founder and CEO, the late Steve Jobs, wasn't a fan of styluses. Jobs once said, "If you see a stylus, they blew it."

Apple TV: One of the most anticipated new products coming out of Apple headquarters in Cupertino, California, is a revamp of the company's digital media player, Apple TV. The company announced its fourth version of Apple TV on Wednesday, along with some big updates to its operating system, look and features.

Users can ask questions about the film or TV show itself (such as "Who stars in this?") or unrelated questions about the weather or other topics. Siri's answers won't interrupt whatever is playing and will instead display under the currently streaming content.

The other big change coming to Apple TV is apps. Users can now access the App Store via Apple TV just as easily as they can using their iPhone.

The Apple TV remote also got a new look:

iPhone 6S and iPhone 6S Plus: Apple unveiled the latest additions to the iPhone family, calling them the fastest and best-performing devices yet.

The coolest new feature coming to the iPhone 6S and 6S Plus is something the company's calling 3-D Touch. The new feature allows iPhone users to apply various levels of pressure to the screen to access different levels of their email, more easily pull up the camera and navigate across apps more seamlessly.

Applying a bit of pressure on the left side of the screen separates the apps running in the background and allows users to swiftly swipe away which apps they don't want open anymore.

The biggest upgrade coming to the iPhone is the A9 chip. The company said the chip makes the phone faster and more energy efficient, offering a "big jump in performance."

Now, on to the iPhone's latest camera: Apple said it has added a brand new iSight camera, the name for its rear-facing lens, to its iPhone 6S and iPhone 6S Plus. The camera has 12 megapixels, 50% more pixels than before, meaning photos will have improved detail. The camera boasts highly accurate color and skin tones, the company said.

The so-called selfie camera also got a boost, jumping to 5 megapixels from 1.2 megapixels in the iPhone 6 Plus.

How has Apple priced the latest iPhones? Exactly as they did the iPhone 6 and 6 Plus when they first hit shelves last year. The iPhone 6S starts at $199 with a two-year contract; the iPhone 6S Plus starts at $299. The phones are expected to go on sale Sept. 25 with pre-orders beginning Sept. 12.