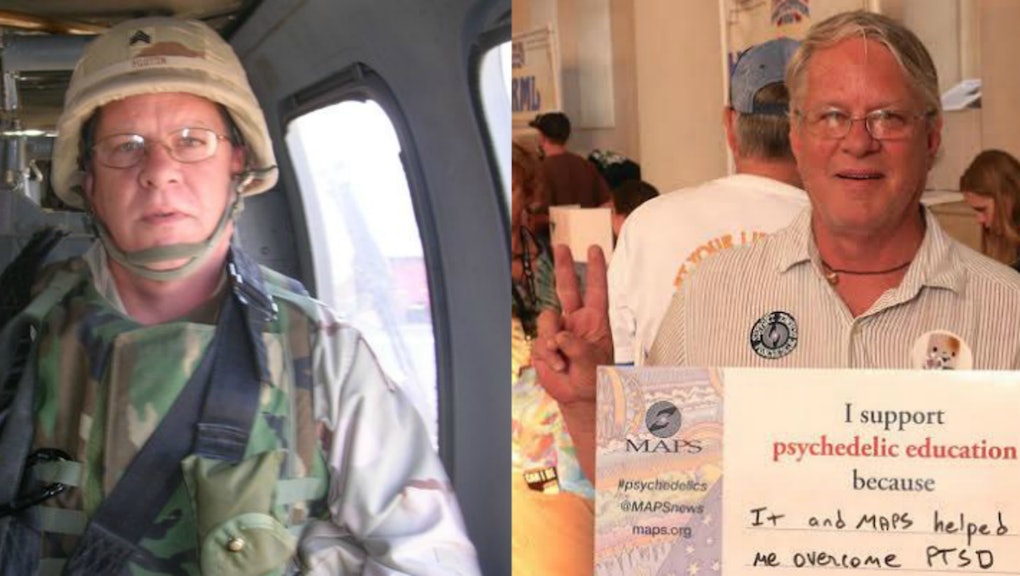 It's demonized as a dangerous club drug. But MDMA, better known by the street names Ecstasy or Molly, has much more important uses than triggering waves of empathy in eager ravers.

The Multidisciplinary Association for Psychedelic Studies has been conducting groundbreaking trials on using MDMA to help war veterans, rape victims and others with post-traumatic stress disorder process their trauma and move forward in life.

Early results suggest the therapy could be staggeringly effective. MAPS spokesman Brad Burge previously told Mic the first study resulted in 83% of 19 patients who received two MDMA-assisted psychotherapy sessions "no longer [qualifying] for PTSD following treatment, compared to 25% of those who received placebo."

Mic spoke via email with Virgil Huston, a former Army National Guard member who served in the military during the Cold War and again during the wars in Iraq and Afghanistan (as a contractor) in the wake of the September 11 terrorist attacks. Huston signed up for duty in 2001, was deployed in 2004 and came home in 2011 to find himself suffering psychologically from his experiences fighting wars overseas.

MAPS' research helped Huston move on from his trauma, just as it promises to do so with the estimated 7.7 million Americans with PTSD at any given time. Below, Huston discusses what it was like to be in a war zone, how leaving it proved nearly as hard and the immeasurable benefits MDMA therapy brought him.

On serving in Iraq: "It was, like any war, mostly boring with brief periods of excitement. I guess we thought we were going to save the Iraqis, but, in reality, I already knew it was a bad war. We had no reason to invade Iraq, and we were doing nothing but making matters worse there. In 2004, I was predicting that something like the Islamic State of Iraq and the Levant would come about. I wasn't alone; most of us knew it was a stupid and ill-advised war.

"In Iraq, I stayed on my base almost all the time. I never saw direct combat. I saw indirect combat every day, literally. Indirect combat is where you are under attack with mortars and rockets without ever seeing the enemy. In direct combat, it is more up close and personal. I saw that in Afghanistan. Either way, you can die."

How war affected him: "In Iraq, I tracked 420 separate attacks over an 11-month period. Attacks came at any time, day or night, and might be close calls or might be a good distance away. You were always on edge, something you really didn't realize until you were home when the adrenaline rush didn't go away.

"I had a few close calls. Once, a rocket landed very close, and the concussion from the blast knocked me and others out for a time, and I lost my hearing for a couple of days. ... [Veterans Affairs] doesn't recognize my claim for hearing loss or traumatic brain injury or PTSD."

On what coming home with PTSD is like: "No one thinks they are going to have problems when they get home. It is a rude awakening when you realize you are like everyone else. I knew something was wrong when I went on [leave] midway through the tour. I met my wife in Germany, and we went to France for two weeks. I was not myself, I slept too much. I reacted to loud sounds. I thought I was burned out. When I got home after the tour, I, at some point, realized I was still on that adrenaline rush."

"You couldn't make it go away. I had all the symptoms of depression. I had problems at work. You name it, life sucked. I ended up unemployed and was about to have my house foreclosed on. I took a job as a contractor in Afghanistan to save us financially. Afghanistan made matters worse. I was unemployed for over two years after I got home in late 2012."

"I had been on every anti-anxiety and antidepressant medication known to man since I was finally diagnosed a few after Iraq. Nothing worked, if anything, they made things worse. I was addicted to Klonopin and Ambien."

On joining the MAPS trial: "MDMA had a bad rap in the press and government drug war propaganda that I had believed, something I soon found out was completely bogus."

"In a nutshell, it was wonderful and enlightening on a number of levels. It is important to note that this is a three-month psychotherapy treatment and only three sessions were with the MDMA. There were non-MDMA sessions before the first treatment, in between treatments and after the treatments."

How it works: "It was a wonderful experience. I was on a mission and had an agenda to get my PTSD cured. Lots of music (instrumental, no intelligible vocals as that would be distracting) and closed eyes just paying attention to what was going on in my mind. Lots of thoughts and imagery."

"One thing the MDMA facilitates is thinking about traumatic experiences in a neutral, safe manner. I could objectively think about them and talk about them. Then, it seems those memories are put back in their place in the brain in a different configuration — a configuration that does not cause as many problems, such as bad dreams, intrusive thoughts all the time or having horrible insomnia because you can't get the shit out of your mind. This has continued to this day, a year and a half after the last MDMA session."

"My three sessions with the MDMA followed what I call an evolutionary path. The first session, I didn't know what to expect and was nervous at first. The nervousness soon passed. Then, I was trying to control the process, I had a mission, I had work to do. This session was when I became completely comfortable with the therapists. What I thought about and what came up was external influences on my life in a general way."

"The second session is when the war trauma came up, and it was intense. It came up on its own, no prompting required. I had never talked about this stuff like this with anyone. This was very cool and helpful. I call this session the direct external things acting on me. The third session was all about my own psyche and went beyond war trauma or anything else external. We delved into why I am like I am."

On why MDMA is so important: "It has greatly helped me to the point I sometimes feel some survivor's guilt because so many people need this and can't get it. I can function on a much higher level than any time since I came back from Iraq. I finally have a job. I no longer think about Iraq and Afghanistan all the time. Those memories don't keep me awake at night or wake me up in a cold sweat. I can now deal with the challenges of everyday life much better.

"This is the silver bullet for PTSD. Policymakers should know that they are criminals for withholding this treatment from the millions who need it (veterans, sexual trauma victims, violent crime victims, etc)."

"MDMA has a safety profile that is far better than most anti-anxiety [medications] and antidepressants. If there was money to be made on MDMA therapy, it would already be legal.The current evidence for MDMA's effectiveness with PTSD is already very clear.

"At some point, it will be legal, because it has to be."

This interview has been condensed and edited.