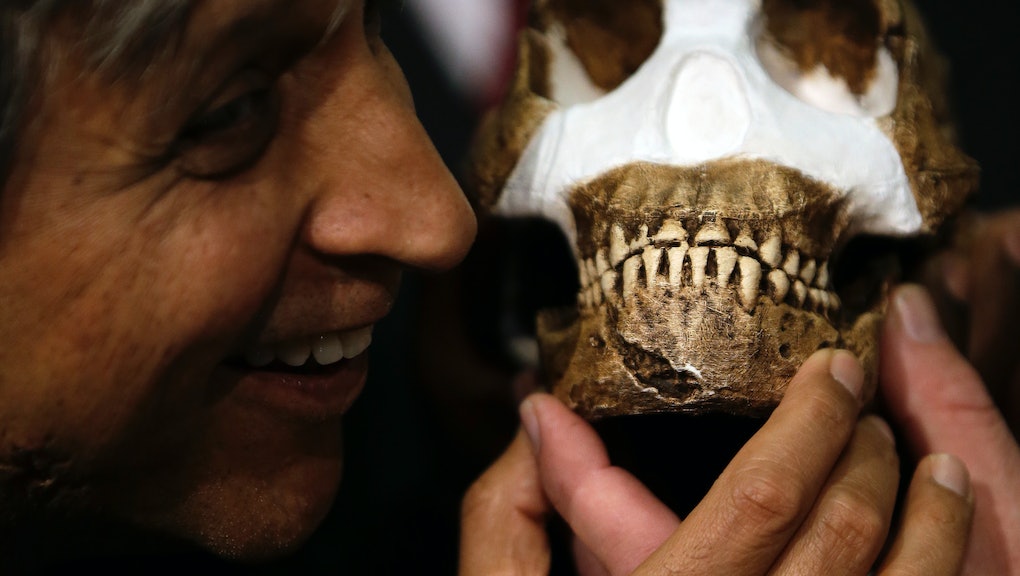 Archeologists unearthed the skeletal remains of what is being called Homo naledi within a burial chamber of the country's Rising Star cave system. "Representing at least 15 individuals with most skeletal elements repeated multiple times, this is the largest assemblage of a single species of hominins yet discovered in Africa," the study reported. So far, it is unclear how old the bones are.

The findings, led by University of the Witwatersrand professor Lee Berger, could potentially represent the answer to science's long quest to uncover the so-called "missing link." The idea of a "link," or transitionary fossil linking modern humans to our primal ancestors, has fallen out of favor in recent years as it is often taken to falsely suggest a "linear evolutionary history," according to Scientific American.

For Berger, the appearance of a deliberate burial ritual was the most surprising of his finds. "We have just encountered another species that perhaps thought about its own mortality, and went to great risk and effort to dispose of its dead in a deep, remote, chamber right behind us," he told CNN. "It absolutely questions what makes us human. And I don't think we know anymore what does."

Getting to Homo naledi was no easy feat. Reaching the burial site required the intrepid to traverse a treacherous pathway through cracks and chutes almost 100 yards from the cave's entry. One point, an area known as "Superman's Crawl," is less than 10 inches high. Another, a narrow rockfall called "Dragon's Back," leads to a steep descending crack only seven-and-a-half inches wide.

Berg himself was not able to manage it in 2013 when he first came to the site. The discoveries were only confirmed after his smaller 16-year-old son managed to reach the main chamber, NPR reported.

And while its brain was reportedly no larger than an orange, the photos reveals how close to us Homo naledi really was.

As Homo sapiens, modern humans represent the only remaining human species on Earth, but that was not always the case. According to eLife, as recently as 100,000 years ago, a number of human-like species, taxonomically defined by the Latin prefix "homo," like Homo erectus and Homo neanderthalensis, wandered the earth. These species rose and fell at different times during human evolution, but since the bones of naledi have yet to be dated, it's unclear where it falls on the chain.

The findings are the largest such trove made of a single human species in Africa. Scientists expect to use the remains to help learn about the species' diet, lifecycle and habits, and for Berger, the finding are just the beginning.

"The chamber has not given up all its secrets," he told CNN. "There are potentially hundreds if not thousands of remains of Homo naledi still down there."