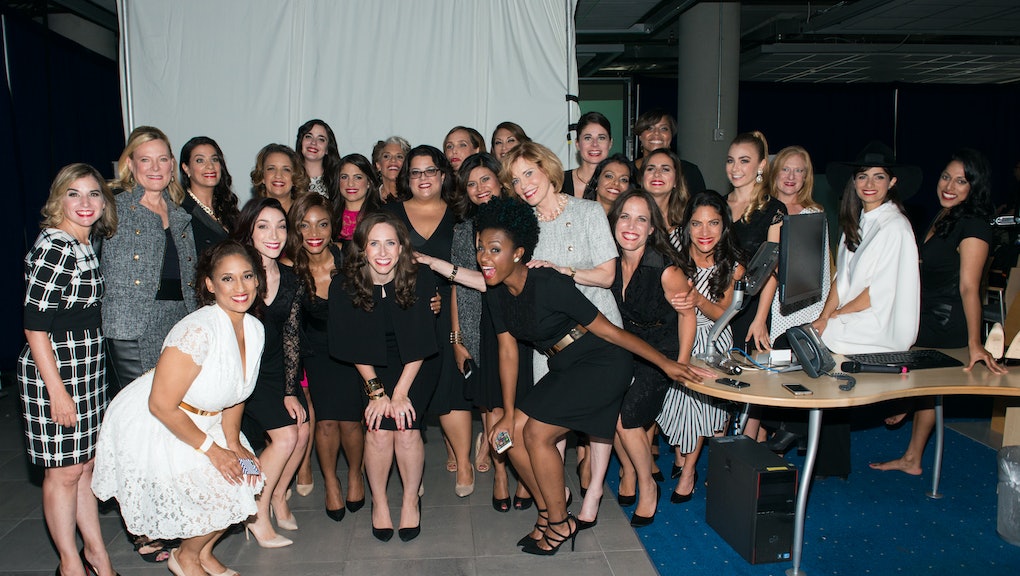 The women walking down the runway at Carrie Hammer's show on Thursday didn't look like the typical tall, waif-like models that dominate New York Fashion Week. Instead, the "models" strolling and sashaying on the catwalk were of all ages and body shapes, not to mention every kind of hair and skin tone.

They also happened to be powerhouse CEOs, trailblazing entrepreneurs and all-around kickass women holding their own in industries ranging from comedy to public policy.

In short, they were exactly the kind of women you look up to as role models. Carrie Hammer, a New York-based designer creating custom workwear for women, has become known for her "Role Models, Not Runway Models" shows, which spotlights a sisterhood of powerful professional women in lieu of fashion models. The goal is to shine a light on these women's major accomplishments and inherent beauty.

Unsurprisingly, the 27 women who modeled Hammer's fourth collection on Thursday read like a mentor dream list, so putting them on a fashion runway could have power and impact. Here's how, according to six of the "Role Models" who strutted their stuff.

Jess Weiner has worked as Dove's Global Self-Esteem Ambassador for a decade, helping inspire women to love and embrace their bodies just as they are.

"[Hammer is] on the leading edge of the conversation we're having culturally anyway. And that conversation is about inclusion. And it's about recognizing that women can be celebrated for things that are exterior and interior."

There's enough space in the larger culture to celebrate all forms of beauty, Weiner said. "Let's celebrate a vast, diverse population of women, not just only the fix or six you see every day."

Satya Twena, the CEO and creative director of Satya Twena Fine Millinery, told Mic that the fashion world can also be an insular one. She was pleasantly surprised when she attended her first Carrie Hammer show and noticed that the audience was filled with female entrepreneurs she knew and admired.

"This felt very different. It felt very familial and fun and beautiful," Twena said, something she'd rarely encountered at other fashion shows, in part because the women there had so much positive to celebrate both on and off the runway.

"These are the people who are really doing the groundwork and laying the foundation for what our world looks like," she said.

Michelle Herrera Mulligan has been the editor-in-chief of Cosmopolitan for Latinas since the magazine launched in 2012. In just a few short years, she said, there's been a shift towards greater diversity among models in the industry.

"When I first started editing [Cosmopolitan for Latinas], it looked like they pulled all the models out of the same box! But things have shifted, I see different body types and ethnicities taking over," she told Mic.

That's why she was so excited to see that taken to the next level in Hammer's show.

"It's electrifying to see all body types, ethnicities, and lifestyles reflected on the runway, and it's made a major impact."

Christine Osekoski, the publisher of Fast Company, told Mic via email that she's seen more women looking for role models, something the fashion industry has a limited ability to provide given its lack of diversity.

At the closing of her show on Thursday, Hammer told the audience that she saw the moment as being part of a "Runway Revolution" for diversity. Osekoski said she did the show because she is eager to be a part of that.

"I want[ed] to support a young woman pushing the boundaries of a traditional institution which, while still magical, is plagued with challenges to women's psyches of perfection and beauty."

Maysoon Zayid, a Palestinian-American comedian and disability advocate, told Mic she was particularly excited to join the show. Zayid, who has cerebral palsy, also has difficulty with coordination. So she was touched when she saw that Hammer had designed a dress for her that opened from the front, making it easier to wear.

It's a small detail, but speaks to an important mindset of inclusion that can change the way people view and judge others.

"I want teens, and college students and people even who are senior citizens to understand that the image that defined beauty for so many years, that didn't look like them, is no longer the definition of beauty," Zayid told Mic. "You can be beautiful, if your skin is a different color, if you're taller than everyone in your class, if you're a wheelchair user or missing an appendage."

Sending her down the runway was also a testament to how inclusive Hammer wanted the show to be, Zayid said: Hammer didn't want to exploit her as simply a model with a disability.