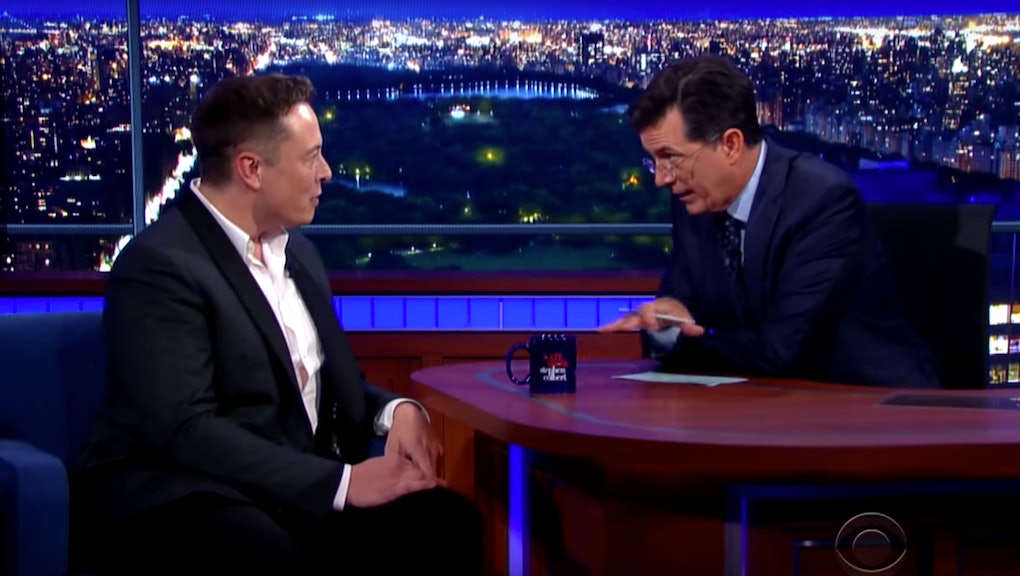 After his interview Wednesday night, Stephen Colbert is pretty sure Elon Musk is a real-life supervillain.

The billionaire CEO of SpaceX and Tesla Motors went on The Late Show With Stephen Colbert to talk about, among other things, going to Mars — though he acknowledged it won't be easy, nor is it ready to go right now.

Mars "is a fixer-upper of a planet," Musk told Colbert. And it's cold: The average surface temperature is minus 67 degrees Fahrenheit. Musk said Mars would need to be heated up, either the fast way or the slow way. One idea? Something right out of a DC comic.

"The fast way is to drop thermonuclear weapons over the poles," Musk said.

The alternative, Musk said, is to release greenhouse gases on Mars (adding that we have plenty of experience releasing those gases here on Earth) in order to slowly heat up the planet to a habitable level.

The next leap is getting people up to the red planet. But first, Musk needs to be able to get astronauts up to the International Space Station, and then have the rockets return home to do it again. Musk says it will be safe enough to do that two or three years — or at least, that's how soon it will be that the rockets won't explode on impact, and can be reused for future missions, greatly reducing the cost of space flight. "If you can re-fire the rockets, it could be comparable to air flight in its costs," Musk told Colbert.

Space X had one snafu earlier this year when its Falcon 9 reusable rocket had a problem with its landing gear — or as Musk put it, it broke a leg — and exploded on its landing platform.

But that may have been a good thing. Seeing how close Falcon 9 was to landing smoothly, Musk believes the landing phase can be tweaked for a clean landing. And if that happens, we'll be much closer to economical space flight and the next big push to putting humans on Mars.

Jury's still out on how the global space community will feel on letting Musk hurl nukes at the planet's surface, however.