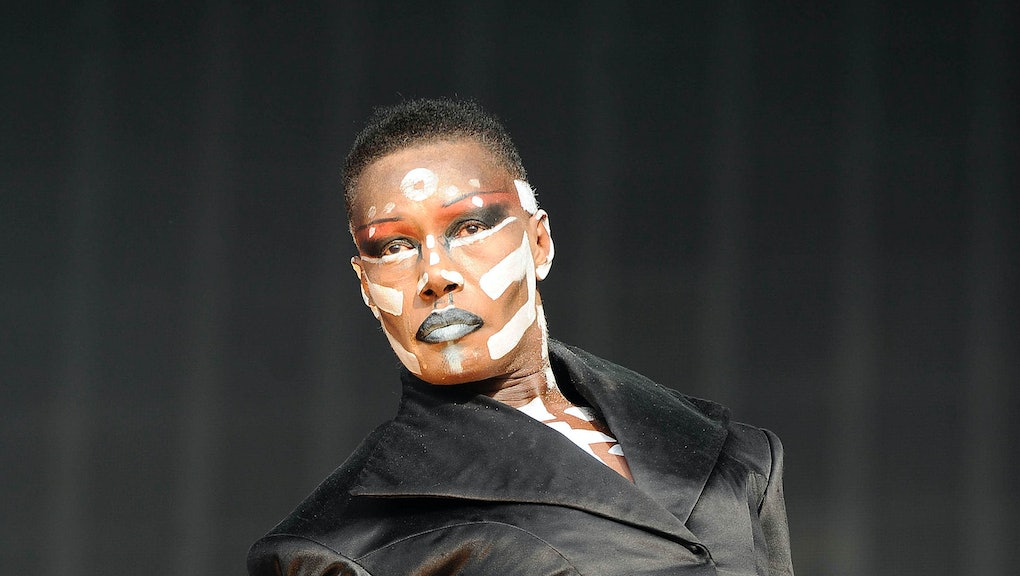 Grace Jones is the definition of fierce. Few performers have matched the unyielding creative vision she has showed throughout her career, and Jones wants the world to know it.

In an excerpt from her upcoming autobiography I'll Never Write My Memoirs, shared with Time Out, Jones calls out the pop world for being complacent creatives and doing nothing but retreading trails the queer icon already blazed.

Top-notch burn: Jones writes that the loudness and craziness of artists like Miley Cyrus, Lady Gaga and Nicki Minaj does nothing for her but signal a startling lack of authenticity and a desire to conform.

"They dress up as though they are challenging the status quo, but by now, wearing those clothes, pulling those faces, revealing those tattoos and breasts, singing to those fractured, spastic, melting beats — that is the status quo," Jones writes. "You are not off the beaten track, pushing through the thorny undergrowth, finding treasure no one has come across before. You are in the middle of the road... If that is what you want, fine, but it's a road to nowhere."

Jones had some especially pointed things to say about Rihanna, whom Jones accuses appropriating her innovations with half-assed execution.

"She does the body-painting thing I did with Keith Haring, but where he painted directly on my body, she wears a painted bodysuit," Jones wrote. "That's the difference. Mine is on skin; she puts a barrier between the paint and her skin. I don't even know if she knows that what she's doing comes from me, but I bet you the people styling her know. They know the history."

"Doris" gets the worst of it. The majority of Jones' comments are directed toward a mystery celebrity whom she labels "Doris." Publications have already begun scrambling to figure out who "Doris" is, but more important than who it is the widespread attitude she represents. The words likely touch a nerve with many of today's pop stars.

"I look at Doris and I think: Does she look happy? She looks lost, like she is desperately trying to find the person she was when she started," Jones writes. "I don't mind her dressing up, but when she started to dance like Madonna, almost immediately, copying someone else, it was like she had forgotten what it was about her that could be unique. Ultimately, it is all about prettiness and comfort, however much they pretend they are being provocative."

Jones herself stands as a complete antithesis to these shortcomings she outlines in today's pop icons. She constantly innovated her style, visual aesthetic and music throughout her long career, which became certified legend in the early '80s. Jones' unflinching sexuality and androgynous fashion statements made her an icon in the LGBTQ community.

Other artists continue to get credit for artistic statements Jones masterminded, but she hasn't let it slow her down. She continues to break ground today. Jones stole the show at August's Afropunk festival away from far bigger names with her bold, cataclysmic performance.

If stars want to continue to lead into the latter days of their careers, Jones insists they need "long-term vision" and a "greater purpose."

"There will always be a replacement coming along very soon — a newer version, a crazier version, a louder version. So if you haven't got a long-term plan, then you are merely a passing phase, the latest trend, yesterday's event," Jones writes. "This is what I would say to my pupil: You have become only your fame, and left behind most of who you were. How are you going to deal with that? Will you lose that person forever?"