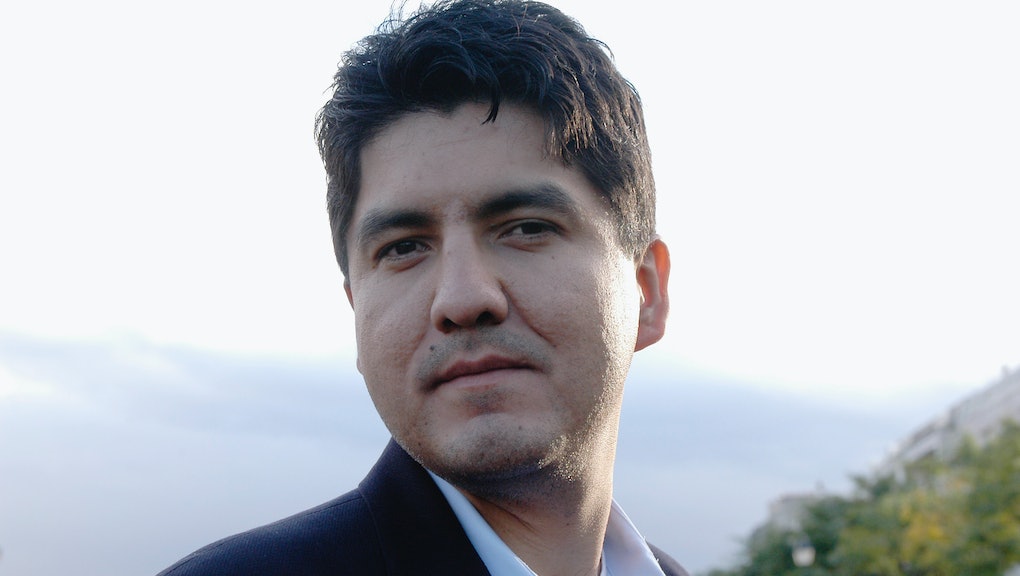 Upon the release of this year's Best American Poetry anthology, readers caught a glimpse into the creation of a new pseudonym: Yi-Fen Chou. Chou is actually Michael Derrick Hudson, who revealed his true identity in his author bio. The poem "The Bees, the Flowers, Jesus, Ancient Tigers, Poseidon, Adam and Eve" is the work of a white, Indiana genealogist.

Author Sherman Alexie, who edited this year's edition, said he was "angry at the subterfuge and at myself for being fooled by this guy. I silently cursed him and wondered how I would deal with this colonial theft."

Nonetheless, Alexie included the poem in the anthology of 75 pieces, not without serious forethought and close reading. In his desire to publish a more diverse collection, "I did exactly what that pseudonym-user feared other editors had done to him in the past: I paid more initial attention to his poem because of my perception and misperception of the poet's identity," Alexie wrote.

Still, reaction to this revelation as been passionate, especially among writers of color.

Devaluing marginalized poets. Hudson wrote a contributor's note for the anthology, admitting his pseudonym was a device to have his work seen in a different light.

Lorenzo Herrera y Lozano, the executive director of the newly-formed Justice Matters Press, which publishes work by people of color, said that Hudson's ruse reflects deeply-held cultural beliefs. "It's so a part of popular culture, this belief that people of color have special access to publishing or admission to universities to kickbacks from government, which of course we know isn't true," Lozano told Mic.

The truth is, the bias doesn't necessarily favor writers of color. For example, as recently as 2012, 88% of books the New York Times reviewed were by white authors. This summer, the Times' summer reading list featured exclusively white authors.

"There's an assumed lack of refinement or craft or credibility to what writers of color provide. That affects the spaces that we get invited into," Lozano said.

Lozano credits his publication in the popular San Francisco journal ZYZZYVA to the advocacy of an editor of color who chose to do a special issue on the controversial Arizona immigration law SB 1070. "I don't know if I would have ever been in ZYZZYVA if he had not done that," he said.

"I know the world of publishing is a system that is stacked against a writer like me that systematically rejects, erases and kills the type of work that I create and that folks like me create," Kit Yan, a queer, transgender, Asian-American poet, said to Mic.

That Hudson assumed an ethnic moniker was a slap in the face to many of the poets. "It's insulting to somebody who really struggles every day in my work to be heard, to be seen, to be visible," Yan said.

"Trans writers of color have more trouble accessing the things that people need to be published or go to a writer's retreat: education, language access, experience in reading, writing and being mentored by folks," Yan said. Yan added that many poets of marginalized identities simply struggle with being seen as human by gatekeepers, which often stands in the way of publication or an invitation to speak at a reading.

"There are very few opportunities for spaces that are for trans writers of color to gain that knowledge and experience on our own terms without having to conform to the world that the work exists in," Yan said.

Kay Ulanday Barrett — a transgender, disabled, Filipino-American poet — told Mic he has been shut out of resources typically available to many other poets, even on the MFA level. "People of color do not always have the leisure to go to school," Barrett said. He also noted the general visibility and acceptance of people within marginalized groups. "How many disabled poets do we see in public? How many transgender poets do we see in public?" he said.

Roberto Santiago, a San Francisco-based poet and author of Angel Park, said he never thought he'd see a white person try to claim a racial identity. "It made me think of all the times I had been submitting poetry and I got pigeonholed as the queer, Latino poet," he said.

Barrett said Hudson's choice of a typically feminine name was particularly noteworthy — a name which the New York Times reported Thursday was actually his classmate's. "To steal a name of [an] Asian-American woman emphasizes the point that these identities are simple and up for grabs, like a food, a rug, a neighborhood, now a name," he said. A Google Image search for the name Yi-Fen for dates prior to the book's publication yield photos of Asian women:

Yan feels similarly about the use of an Asian-American woman's name. "I think the stereotypes are that we are weak, quiet, we are easily overtaken, we are soft," he said. " [I]t's just like, you know, choosing an easy target, which is so insulting to me because of how hard I know Asian-Americans fight for invisibility in the world of art to be heard," he said.

Is brown nepotism real? Alexie wrote in his blog that selecting Chou for publication was its form of nepotism. "I am a brown-skinned poet who gave a better chance to another supposed brown-skinned poet because of our brownness," he said.

However, Lozano and several other poets feel that in calling his act nepotism, Alexie misused the word.

"I think racial nepotism is an industry standard in publishing, but it only favors white people," Lozano said. "To coin what he was doing as brown nepotism is ridiculous, because I think as publishers, as editors of color, it is part of our work. It's why we fight for these positions."

Barrett said Alexie acted as an advocate, not out of nepotism. Yan agreed that using a position of power to amplify others is permissable, adding white publishers and editors should do the same. "They should absolutely take into account the entire landscape of what the publishing industry looks like," he said.

Lozano said he runs "a people-of-color press, and I make no apologies for what I'm doing. The writers that I work to get out have work that is worthy, and they have worked on their craft for years and have audiences that have been wanting the type of work that we've been putting out."

But Lozano had to also wonder: "What if we had a Best American Poetry collection that was 90% people of color? What would they say? What would happen?"