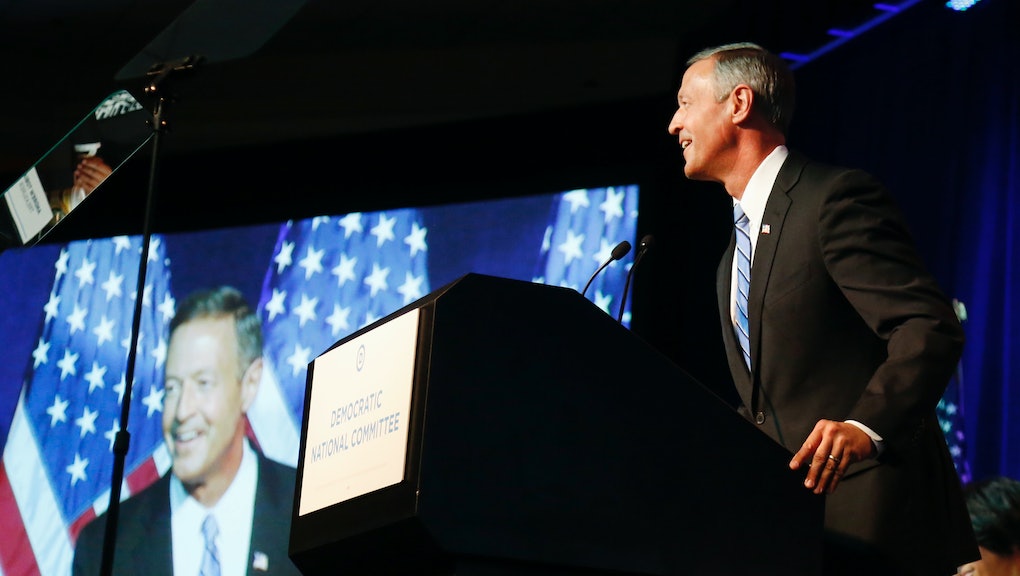 Democrats Are at One Another's Throats Over the Party's Debate Schedule

During the 2008 Democratic presidential primary season, the leading candidates engaged in 25 debates. The process began in April 2007, when the field included eight contestants, and continued apace for nearly a year, until only then-Sens. Barack Obama and Hillary Clinton remained in the running.

Seven years later, the Democratic National Committee has cut back severely on the calendar, prohibiting candidates from participating in any event not formally sanctioned by the party. That means a maximum of six debates, three of them currently slated to take place on weekends, including one set for Dec. 19, the Saturday before Christmas.

Wasserman-Schultz took fewer than 12 hours to publicly reject their request, telling reporters at a Thursday breakfast in Washington, D.C., that the party is "not changing the process," while warning that "candidates will be uninvited from subsequent debates if they accept an invitation to anything outside of the six sanctioned debates," according to the Hill.

But the congresswoman's declaration is unlikely to satisfy concerns among Democratic insiders or interested outside observers. Debates, though often weighted down and derided by spectacle, remain important opportunities — and obstacles — for presidential candidates trying to win over or maintain the support of millions of voters. For both national parties, they can act as a crucial tool, free of charge, for drumming up interest and gaining national exposure.

For that reason, the Democratic establishment's decision to limit debate in this cycle has emerged as a curious and, for many, increasingly suspicious course of action, especially given the rapidly changing dynamic of the race.

Pushing for more: Wasserman-Schultz's pointed message was directed, in part, at former Maryland Gov. Martin O'Malley, who has struggled to gain traction in early polling. His campaign has dedicated much of the past few weeks to agitating for a more robust debate schedule, arguing that more conversation is healthy for the party. New debates, of course, also mean additional face time for the candidate.

To that end, the campaign is currently promoting a protest outside DNC headquarters on Sept. 16, the same day the Republican candidates will gather for their second debate of the cycle. The push has taken on the trappings of its own mini-campaign, complete with the awkwardly phrased hashtag #WeNeedDebate:

At the DNC's summer meeting in Minneapolis, O'Malley said the system had been "rigged" to quiet opposition to Clinton, a longtime ally of Wasserman-Schultz, who sat just feet away.

Lis Smith, O'Malley's deputy campaign manager, told Mic in a phone call that she is "hesitant to characterize the DNC's motivations," but that "in the absence of them giving any good justification, [their decision] has the appearance of them trying to stack the deck for Sec. Clinton."

O'Malley is ready and willing to take part in an unsanctioned debate, Smith said, despite threats from party officials to ban him from future events if he does. Sen. Bernie Sanders (I-Vt.) has also asked for additional debates, but his campaign, now surging in the latest polls out of New Hampshire and Iowa, has been more hesitant to stir the pot. They did not respond to requests for comment on this issue.

The wild cards: For her part, Clinton recently indicated she would be "open" to expanding the schedule, but has offered no proper request to the DNC. The last gasp, if Clinton refuses to push further, could arrive in the form of Vice President Joe Biden. He is openly considering a run and would likely be granted added debates if he chose to enter the contest, according to the prevailing wisdom.

Steve Schale, a veteran of Obama's two presidential campaigns and now an informal adviser to the Draft Biden super political action committee, said that while he had no knowledge of the vice president's thinking, the DNC was going down the wrong path.

"Debbie Wasserman-Schultz has been my friend for 20 years," he told Mic last week, "I think she is completely misunderstood a lot and has done a lot for our party and so I support her personally, but I do think that having more debates would be a good thing."

Schale is not alone.

The DNC, however, disputed that suggestion. In an email, national press secretary Holly Shulman echoed her boss' comments. "There will be six debates," she wrote, saying any suggestion otherwise was "not right."

The right gets it right: The first Republican face-off, in Cleveland on Aug. 6, attracted 24 million viewers to the Fox News channel, making it the "most-watched cable news program ever," according to Adweek.

Though a large part of the interest then centered on the Donald Trump gong show, the debate had the more concrete effect of elevating former Hewlett Packard CEO Carly Fiorina and Dr. Ben Carson, who has risen in the polls after delivering a steady performance in primetime.

But debates aren't only about birthing stars. Sen. Marco Rubio (R-Fla.) was among the more established candidates forced to confront uncomfortable policy questions in Cleveland. Asked if he would support abortion bans that allowed exceptions in the case of incest, rape or to protect at-risk mothers, Rubio said he would not.

Wisconsin Gov. Scott Walker mostly ignored the abortion question, while New Jersey Gov. Chris Christie and Sen. Rand Paul (Ky.) engaged in an intense dispute over the utility of the National Security Agency and domestic spying, putting that oft-ignored question on center stage for at least a few taught minutes.

The Republicans will meet again next week, the second gathering sanctioned by Republican National Committee Chair Reince Priebus. This time around, Fiorina will be featured alongside Trump, Rubio, Bush and maybe a dozen more. Though the stage will be crowded, good luck to any candidate with plans to hide.