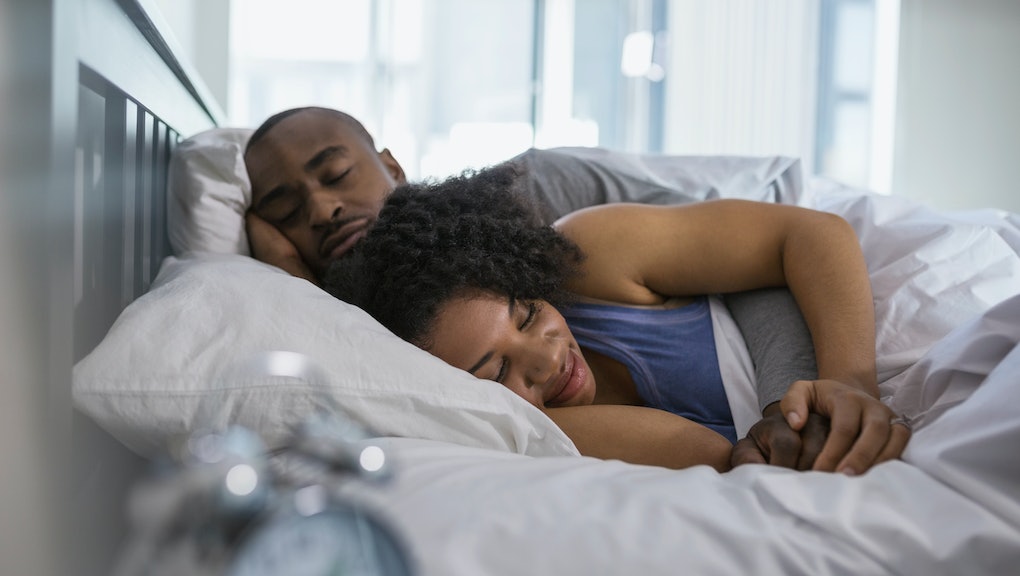 You know how soft and smooth your partner's skin feels on your fingertips when you cuddle up next to them at night or give them a massage? Research says their skin probably isn't as delicate and baby-soft as you think it is — in fact, it might just be a total illusion.

Scientists at the University College of London discovered the softness of your significant other's skin is likely a trick of the mind to keep you interested in cuddling, stroking and massaging your partner.

In a study published Sept. 10 in the journal Current Biology, researcher Aikaterini Fotopoulou and her colleagues performed six different experiments to understand why people's skin feels so soft to the touch. They found that the illusion only worked when people touched hairy skin (the forearm as opposed to the hairless palm) and when they touched the skin at a slow, stroking speed, similar to how you might stroke your partner's arm or back while cuddling with them.

The person being touched feels pleasure because they have sensory cells specifically attuned to this slow, comforting stroke, which, when activated, causes them to feel a warm, fuzzy, happy feeling. But this active stroking creates sensory pleasure for the toucher as well, by creating the illusion that their partners' skin is smooth and soft to the touch. "Giving pleasure is receiving pleasure," Fotopoulou told Mic.

The science of touch has evolutionary roots. Fotopoulou and her colleagues believe the illusion of softness is a psychological trick your brain plays on you to keep you interested in engaging in social touch, and there's a large body of evidence to suggest that such touch is beneficial for humans. Research shows that regular touch in the form of a hug, massage or even a handholding session can help reduce pain, lower your heart rate and boost your immune system.

There's some evidence that animals enjoy the benefits of touch as well. Some primates, for instance, engage in grooming behavior by pulling out bugs from one another's fur, but often they will keep grooming each other longer than necessary. Researchers think this behavior is a primate form of "social touch," which plays a major role in relationship building and bonding.

"If there's a predator coming in, the [primates] that are touch buddies will defend each other and not the rest," Fotopoulou said. She hypothesizes that humans have retained this preference for touch over evolutionary history.

We have much more to learn about the benefits of touch. Although the softness illusion has a number of implications for future research about the importance of human touch, Fotopoulou said she and her colleagues have more work to do to confirm that it's real. For instance, because women tend to be more sensitive to emotional touch, the study only used women as subjects, so they have yet to see if the effect is as strong in men. Fotopoulou and her team are also looking into how the effect of touch might change depending on whether the person you're touching is your partner, a friend or a stranger.

But experts say the study has enormous potential in terms of helping us identify a connection between the emotional centers of the brain and the parts of the brain that alert us to internal cues in the body. These two areas sometimes overlap, suggesting a possible explanation for why an emotional touch can elicit a sensation of softness, Megan Klabunde, a psychiatrist at Stanford University who was not involved with the study, told Mic.

"This study is very important to see the importance of human connection through interpersonal affective touch," Klabunde said. "It is a phenomenon that we don't know very much about, but it's really important that we understand this aspect of how we as humans relate to each other."

Even though we know touch is important, there's a stigma attached to it. There's something of a taboo associated with touching others in social contexts. "In the States, touch is really prohibited socially," Fotopoulou said.  If you've ever wondered whether it was acceptable to hug a passing acquaintance, or even just tried to avoid brushing legs with someone sitting next to you on a bus, you know how prevalent that stigma is.

Fotopoulou hopes her work will highlight the importance of emotional touching to social development. But we still have much to learn about how touching affects our social brains — and why it's so important.

"Without touch, we are deprived of a very important element of social communication," Francis McGlone, a neurobiologist at the University of Liverpool who was not involved with the study, told Mic. He noted that children who are deprived of touch from a young age often fail to thrive. "[Touch is] not just a nice event, it's a fundamentally important interaction," he said.

So if you needed extra incentive to stay in bed and cuddle with your S.O., this is a pretty good one: Science says it's good for them and for you.