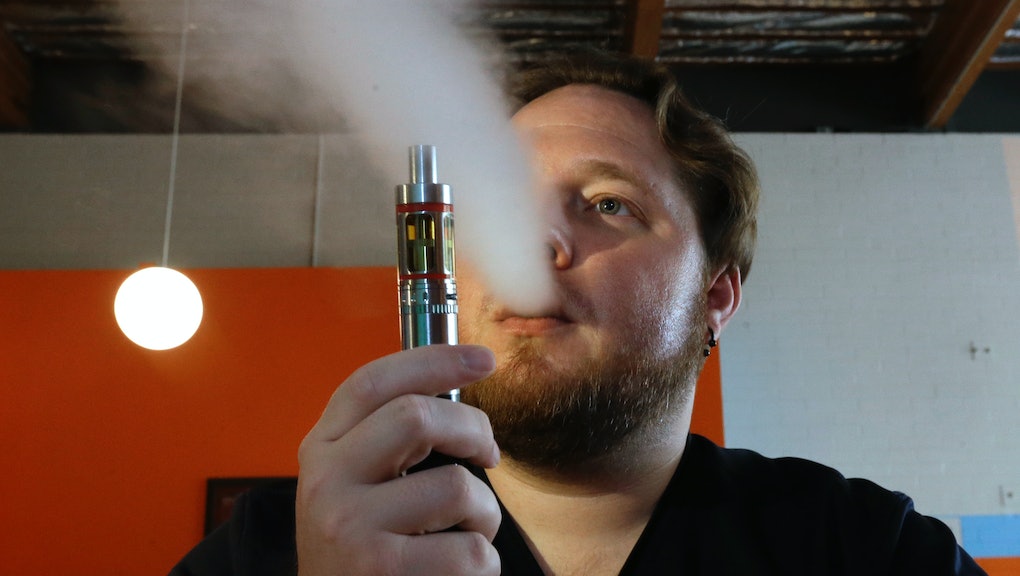 Vaping Could Save the World, but Toxic Masculinity Is Holding It Back

Tobacco kills more people in this country than murder, alcohol, car accidents, heroin and suicide combined. But people would rather die from smoking than be caught dead vaping.

Vaping — or the act of using high-tech, electronic cigarette systems that simulate smoking — is having an identity crisis. A branding issue. An optics problem.

Vapes bill themselves as a safer way to wean yourself off of smoking and make nicotine a safer drug. But niche vape marketing that's rich with sexist tropes is creating a toxic taboo around the culture and driving away a mainstream consumer base, especially women.

If you believe that vaping is, if not completely safe, a better alternative to cigarettes, then what's at stake is more than what's cool and what's not; it's people's lives. Smoking-related deaths in the U.S. amount to almost half a million per year. Vaping is a technology that aims to disrupt the tobacco industry, for good reason — but it's not catching on.

Here's what's holding it back.

"We get it, you vape." The vaper, stereotypically male, has become an object of ridicule, derided in the same category as the self-proclaimed "nice guy" who's really anything but. Nothing illustrates this more colorfully than the memes that jab at vape aficionados for ostentatiously showing off their smoke products. Vapers, as the stereotype goes, can't just vape; they need you to know about it.

The tropes of vaping culture drip of toxic masculinity. In fact, women are more likely to try vaping than men, and more likely to want to. Mic spoke to several vape shop employees who said women and men are equally represented in the real-life vaping community. But looking at vaping's most visible ambassadors, you'd never know it.

The hypermasculine image that vape marketers are selling is a self-fulfilling prophecy that could lock vaping out of the mainstream if the community can't overcome the stigma.

There's serious money to be made for the person who can make vaping accessible and inclusive.

Vaping is getting a bad reputation, and one look at the core community shows why. It's in the advertisements and glossy photography campaigns featuring seminude women and daggers, krakens and oak casks.

It's in the names of the e-liquid flavors that sound like marijuana strains: "King Bee," "Carnage," "Spide Trader," "Vigilante," "Rogue," "Skull and Crossbones."

Vape newbies get the same vibe trying to dip their toes into the vaping world as someone might get walking into a comic shop for the first time — a sense of a subculture so strong it makes you ask, "Do I belong here?" That inaccessibility, plus the marketing, makes it easy to cast aspersions on the community.

"The views of the community from the outside are more negative than ever," vaping reporter and blogger Shawn Avery said. Avery writes for the brand blog of Drip Club, an online retailer and brand curator that could be called the Gilt or Thrillist of vaping. He's one of the few writers combing the Internet — as well as L.A., the modern Mecca for vaping companies and communities — for insights into the vaping community, writing everything from tongue-in-cheek listicles about vaper stereotypes to researched stories about nicotine addiction and transparently flawed anti-vaping research papers.

A better model for the current state of vaping culture might be the niche tattoo culture, urban skating communities or motorcycle detailing shops — where logos slathered in gothic letter-print cover shop walls, where Hot Topic-style black cargo shorts live on, where men are engineers and trailblazers and women are bombshells, pin-ups and fighting fuck toys.

One look at footage from this year's Electronic Cigarette Convention in Los Angeles — notable presenters included Jason Mews of the of the Jay and Silent Bob films — shows a subculture dripping with the trappings of toxic masculinity. It's too easy to see how many women would be driven away.

"Naked women, pasties, tattoos, hard imagery — the conventions aren't necessarily appealing to the potential audience," said Mary, a PR professional who works with major vape accessory brand Vapesox. (She declined to give Mic her last name.) Mary was hired in the past few weeks to help revamp the Vapesox brand. So far, Vapesox has scrubbed its website of the bikini models, and it's looking for ways to diversify the marketing so that it's not pigeonholing its products with the tired conventions of vaping's limited demographic.

"Vapers are, largely, people looking for a tobacco alternative, but branding doesn't show that," Mary told Mic. "It's not inclusive."

The way vape companies market just adds to the problem, creating a vicious circle that reinforces the incumbency of the vape-bro. VAPE Magazine, one of the few publications catering to the vaping world, is stacked in piles underneath glass tables at vaping bars around the country. It shares an aesthetic appeal with publications like Inked and High Times, and the ads either cash in on classical machismo or skip straight to femme-fatale booth babes in bikinis.

"People are spending really big money to have their products marketed, especially right now," Mary said. "We can't use traditional advertising outside of VAPE Magazine. So there's still a taboo feeling, and the branding isn't helping that."

How we got here: As people in the vape scene are quick to remind you, vaping is still incredibly young, and the phenomenon of the vaper stereotype can quickly evolve. Vaping is like computer culture in the late 1970s: dominated by hackers, geeks and "phone phreaks" messing with complicated, futuristic tools. This isn't even the first act for vaping. It's just the prologue, but its start in America hasn't been smooth.

The first major electronic cigarette manufacturers originated in China in the mid-2000s, but didn't have the high-tech appeal vaping does now; it was mostly convenience-store junk that couldn't simulate the full smoking experience.

"The equipment was terrible in 2008 and 2009, and when it started making its way [to the U.S. from China], nobody knew what it was," Avery told Mic. "So forums developed on the Internet to discuss products, e-liquids, what works and what doesn't, health concerns."

"The industry itself is doing a good job of keeping that reputation, as well: a young shitty male activity." — Shawn Avery

Before vaping shops sprouted up in L.A. and NYC, there were vaping meet-ups. As is the case with many Internet subcultures, Reddit became a hub for sharing tips and tricks. (Sexism in vape shops recently popped up as a topic of conversation.) By 2013, vaping was becoming a very technical hobby, with expensive builds called "box mods" that have multiple pieces, hot metal coils, specialized liquids and batteries.

"Still today, when somebody wants to get into vaping, whether it's to quit smoking or otherwise, it's not as simple as smoking a cigarette," Avery said. "You need that community aspect to have a satisfying vaping experience, if you have questions or if equipment isn't working."

That learning curve amplifies the alienation a new vaper can feel approaching the subject, especially if she already doesn't feel like a cultural fit. Getting started with vaping already requires a brief learning curve, a heftier financial investment than a pack of cigarettes and some hands-on experience with the product.

"The latest trend is larger products that are big, battery-powered, big tanks full of liquid and which produce a lot of vapor; it's too much for the mainstream," Adam Bowen, co-founder of vaporizer company PAX Labs, told Mic.

PAX wants to do for vaping what the Apple II did for the home computer: provide a simple, elegant product that anyone can use conspicuously and easily. PAX vaporizers are discreet, effective and expensive; one stoner Mic spoke to called the first PAX vaporizer "the iPhone of vapes." The JUUL, PAX's vape to replicate cigarette, has a mint flavor that's the closest thing to smoking a Newport this writer's ever tasted. PAX has shown up in a number of tech blogs and men's magazines with critical acclaim. The company is interested in getting PAX in front of chefs, designers and fashion influencers.

"We're trying to reach a much bigger audience, which is the smokers at large: the people who don't read vaping magazines," Bowen said.

After all, there's serious money to be made for the person who can make vaping accessible and inclusive — to take the clunky box mods and find something glitzy, sleek and easy to use.

If vaping wants to go mainstream, it needs to include women. A handful of surveys and research papers show that women are anywhere from 1.27 to 2.05 times more likely than men to try vaping. But in terms of advertising? The disconnect should be obvious by now: Men are 1.25 times as likely to see a vaping-related advertisement.

"Everybody in the vaping community has the same blinders on, thinking that they need to target this young male population," Avery said. "The industry itself is doing a good job of keeping that reputation as well: a young shitty male activity."

It's no help that there are few women at the helm of major vaping companies. One retailer even referred to the vape business as "all a man's game." But when there are women steering the ship, the differences are clear.

Barbara Villegas is the founder of the Vaping Rabbit. The names of her e-liquids lean away from nerd-culture references and wine-rack snobbery; they're whimsical, minimal and effeminate. Her first line was Lewis Carroll-inspired, with liquids like "the Alice," "the White Queen" and "the Cheshire Cat."

One popular and accordingly pricey new product from Villegas is called Milkman, a buttery e-liquid with clever packaging and a commercial that puts the debonaire delivery boy as the object of lust (that's Shawn Avery in that video, incidentally). It's delicious, Pop-Tart- and cupcake-like. (Villegas couldn't be reached for comment.)

Vape culture is having the same growing pains as gaming culture. In both cases, there's a hardcore community of early adopters who have become intrinsically associated with the technology: For gaming, it's the basement-dwelling white male nerds; for vaping, it's the metal-heads with gauged ears and box mods. The hardcore crowd tends to scare away the potential new fans.

But as subcultures evolve and become mainstream, time slowly erodes the initial stereotypes. Women are now the largest demographic in games. Tattoos are more socially acceptable and ubiquitous each year. And need we remind you how things worked out for the home computer?

But the difference is that the ultimate crusade of many vaping evangelists is personal health. If vaping is on the right side of history, it's about time the electronic cigarette business looks beyond the conventions both literal and figurative, beyond VAPE Magazine and the brick and mortar stores. And that starts with making vaping more accessible.