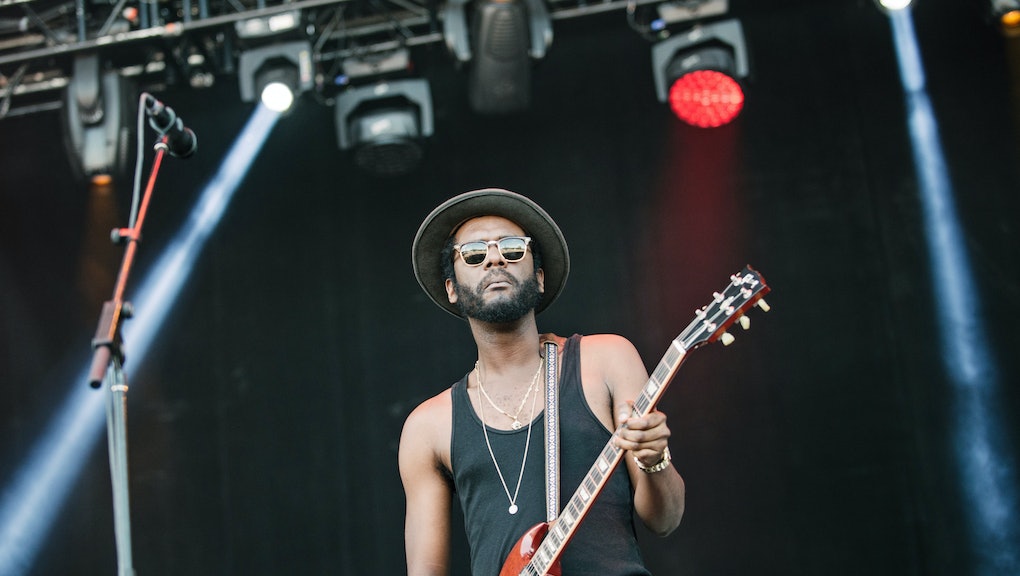 Gary Clark Jr. Is Not the Blues Savior He Was Foretold to Be — and That’s a Good Thing

Gary Clark Jr. has been a musical anomaly for over a decade. The guitar prodigy began apprenticing under Stevie Ray Vaughan's brother Jimmie Vaughan at 14. After a decade of weathering the Texas blues scene, he broke into the spotlight to play alongside Eric Clapton and Buddy Guy. Fans hailed him as the prodigy born to save the blues.

When his major label debut Blak and Blu dropped in October 2012, however, it had a lot more hip-hop, soul and R&B than many blues purists seemed comfortable with. Clark followed up with a reimagining of his already inscrutable record, assisted by Mississippi rapper Big K.R.I.T. His latest album, The Story of Sonny Boy Slim, throws another 13 stumbling blocks into the path he's supposed to tread to lead blues back to the promised land.

This does not mean the album is bad — not by any stretch of the imagination. The Story of Sonny Boy Slim is a far more exacting and evocative statement of Clark's musical identity than anything he's released previously. His guitar is out in front where it needs to be, and he sounds far more comfortable veering into his more contemporary genres. It's confirmation that the years of hype surrounding Clark's musicianship are well-earned. He's just about far more than blues.

The title Clark didn't ask for: Clark is conscious of the expectations the world set for him. If anything, they've emboldened him to find his own honest sound.

"If it were up to everybody else, I would do Hendrix covers all the time," Clark told Rolling Stone toward the end of 2013. "I saw this comment from somebody online the other day, saying, 'We need you to play more Chicago or Louisiana blues — we want the raw shit.' Well, I'm not from Chicago or from Louisiana. I'm not from that time period ... So why am I going to pretend?"

Blak and Blu felt like a deliberate attempt to shake these perceptions and separate his true fans from those only looking for another dynamic blues soloist. Where that record could feel scatterbrained and overwrought at times, more concerned with recognition as liberated than being a liberating experience for listeners, The Story of Sonny Boy Slim is a balm for the soul.

A solid chunk of the album seems dedicated to reconciling Clark's past with his visions of the future. It takes its title from two of the names he was called growing up: Sonny Boy, which his mother used to call him, and Slim, which his buddies on the blues scene dubbed him.

The album's first song appears to address the tumultuous reception his music has enjoyed over the years. It puts aside all the conflicting agendas in order to focus the listener's attention on something truly worth celebrating: the miracle that is musical expression. "For some people it's too much/ For some people it heals/ This music is my healing," Clark sings on the album's opening track, "The Healing." "When this world upsets me/ This music sets me free."

"Hold On" dives even more deeply into the problems of the world. He digs through his past, telling stories about his father coming home from work world-weary. "I didn't understand it then," Clark sings. "But it's hard to be a good man knowing that another man's plan is to take what you're making." He then breaks into a hopeful chorus, reassuring listeners that we're going to make it, a similar message to Kendrick Lamar's certified protest anthem "Alright."

Clark's solos may capture this sense of hope more vividly than any of his lyrics. His strings reflects all the album's joy, aggression and pain with an expressiveness few others could hope to capture. The strongest tracks capture the unrelenting ferocity of his live act, songs like "Grinder" and "Stay," which are heavy on the acrobatic string bends and feedback manipulation that caused so many to label him the next Jimi Hendrix.

Yet Clark's music is so much more than a rehash of old blues guitar tropes. The Story of Sonny Boy Slim melds the brash swagger of hip-hop with some laid-back haziness of today's trippy beat-based R&B and a healthy dose of the traditional blues he grew up with. He's every bit the innovator Hendrix was, but he's working with an entirely different sonic palette. Clark gets more and more comfortable working with those colors with each album he drops.