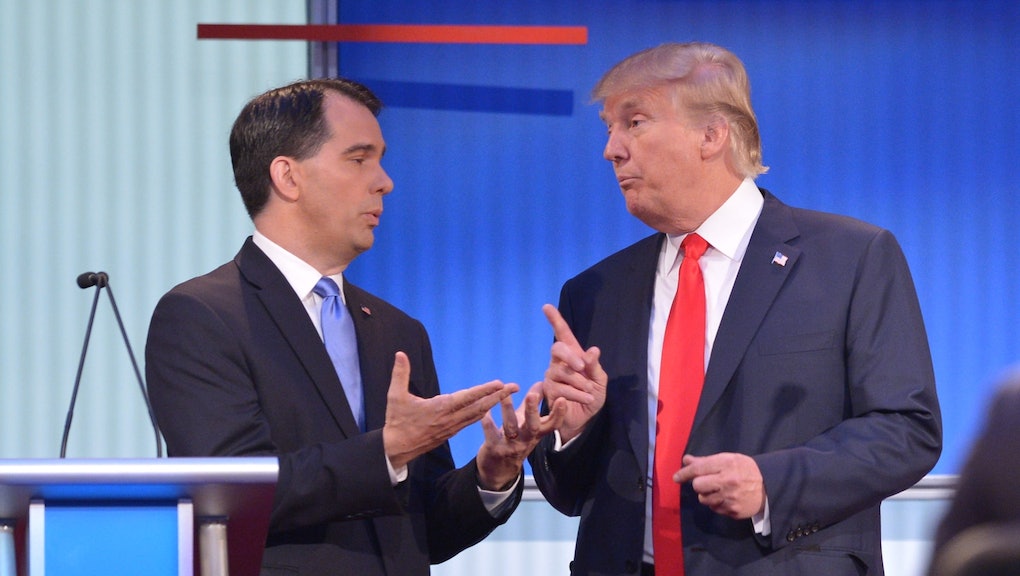 Wisconsin Gov. Scott Walker, who was once the frontrunner of the GOP candidates aiming for the White House, has dipped to just 3% in the latest Quinnipiac University Iowa poll released Friday morning. Walker had previously held as much as 18% of the GOP vote among likely Iowa Republican caucus voters at the start of July, but has since dropped behind most of the bigger names on the ballot.

Meanwhile, Donald Trump continues to surge in the polls, with 27% of Iowa Republican caucus participants saying they would vote the business magnate into the White House. Neurosurgeon Ben Carson is the only other GOP candidate close to Trump, with 21% of the vote, while the rest of the pack falls between 1% and 9%.

While he is holding the lead, the new polling also reveals Trump is the least liked candidate of all, proving him to be the most polarizing force in the GOP race thus far. According to the poll, "25% of Iowa likely Republican Caucus participants say they 'would definitely not support' him for the GOP nomination."

When Walker held the lead in July, Trump and Carson were each favored for presidency by just 10% of those surveyed. Walker's 15-point drop can be attributed, in part, to what some see as an inability to energize his base. University of Northern Iowa in Waterloo political scientist Christopher Larimer tells the Chicago Tribune, "He's been underwhelming as a campaigner in terms of getting people excited ... Donald Trump is squeezing him out."

What's more, the top three leading GOP candidates all have something unique in common. Peter A. Brown, assistant director of the Quinnipiac poll, writes:

Perhaps even more surprising, given the 17-member field of candidates vying for the Republican presidential nomination, is that more than half the votes in the Quinnipiac University poll of likely GOP caucus-goers are going to three candidates who have never held political office - Donald Trump, Ben Carson and Carly Fiorina.

As the general election approaches, candidates will be using the highly anticipated national live debates to attract voters and get ahead in the polls. The next debate, the CNN Republican Primary debate, airs Wednesday from the Reagan Library in Simi Valley, California.