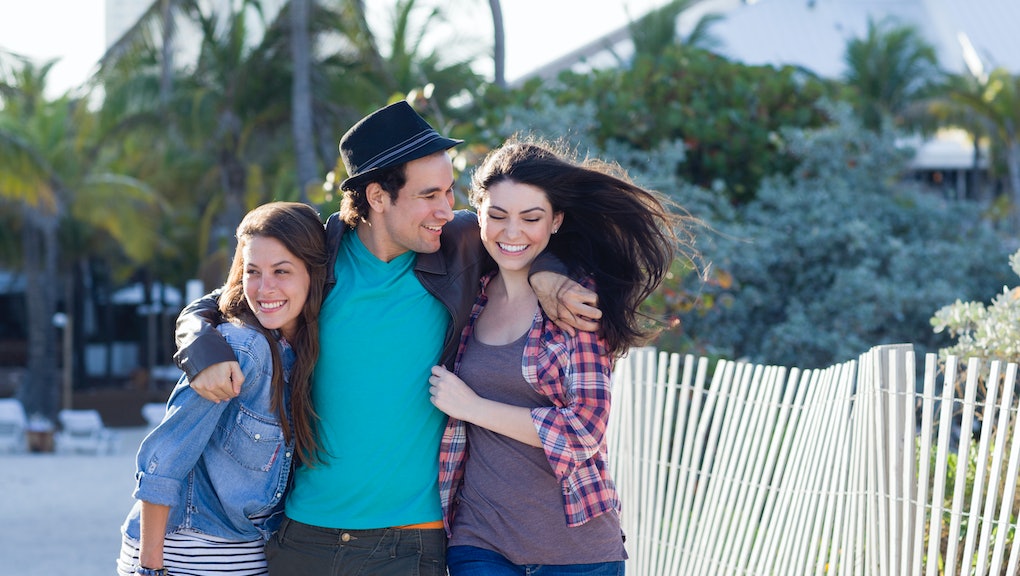 Here's the Real Reason Why So Many Women Are Single

Beware! There's a man shortage currently sweeping the nation, claiming innocent straight women and damning them to a life of eternal spinsterhood.

At least, that's the idea you might get if you perused Jon Birger's Date-onomics: How Dating Became a Lopsided Numbers Game, which argues that the real reason why so many college-educated young women are single is because of a nationwide man deficit.

While there might be some merit to Birger's theory that a lopsided gender ratio might help account for contemporary hookup culture, there's one thing the book doesn't quite acknowledge: Straight women aren't single because there aren't enough men for them. They're staying single simply because they want to be.

The so-called "man shortage": According to Birger's research, a daunting surplus of women — 5.5 million college-educated women between 22 and 29 in the United States, versus 4.1 million college-educated men in the same demographic — has brought about a culture in which men are confronted with an endless buffet of sexual partners, while women are left single and unwed.

"For young, college-educated adults, the heterosexual dating pools in cities such as Manhattan or colleges such as Boston University have three women for every two men," Birger told Mic.

The unfortunate results of this nationwide "man shortage"? "The broad social and psychological effects of lopsided gender ratios ... [are] more emphasis on courtship, romance and monogamy when women are scarce, versus looser sexual mores and women treated as sex objects when men are scarce," Birger said. In short, it's the perfect climate for men to swipe through Tinder and treat it as their own private, sexual playground.

While arguments like Birger's certainly put the major social dating shifts of the past decade into a fitting context, they also seem prescriptive for only one type of woman — the straight, educated, "I-want-to-get-married-where-is-my-Prince-Charming" kind.

The problem is that while some women do indeed fit into that category, many women in the cities where Birger identifies a "man shortage" don't. In fact, they don't really want to get married at all.

"I know lots of single men," Cara, 26, a resident of Brooklyn, New York, told Mic. "It's just... most are of little or no interest to me as anything other than a hookup."

Tired of old ways: The somewhat revolutionary notion that women are actually deciding not to marry is something that wouldn't be possible if the value of marriage itself hadn't changed drastically over the years.

"When women's life choices were highly constrained, they had little negotiating power," Pepper Schwartz, a sociology professor at the University of Washington, wrote for CNN. "They had to marry or were seen as damaged ... It's different now. While most women still want marriage, they don't want it at just any price. They don't want it if it scuttles their dreams."

That, in part, is due to marriage no longer being a must for women's social and financial standing. "I don't think hookup culture is damning for long-term commitment," Lisa, 27, said. "I think it's a response to the large obsolescence of marriage as an institution for women. We don't need to be economically or socially dependent on men."

That carries out through the numbers. Compared to their grandparents' generation, millennial women are significantly more likely to have a bachelor's degree and be a part of the labor force.

"I think a lot of us just don't think marriage is that important because it doesn't offer the security it once did," Norah, 27, told Mic. "It's not as necessary anymore because I can work. I can support myself."

While the pool of single, college-educated men has certainly dwindled, so too has the pool of single, college-educated, 20-something women actually looking for marriage. In fact, a 2014 Pew Research Center report found that just 26% of people ages 18 to 32 were married in 2013, compared to the 48% of baby boomers and 36% of Generation X-ers who tied the knot at the same age. As the New York Times recently reported, "the number of women between 30 and 34 who are not marrying has increased by 31% between 2007 and 2012."

It's not that there aren't enough men to explain waning marriage stats — there also aren't enough women who want to walk down the aisle.

There are plenty of men — they're just not that great: There's an oft-retweeted quote by writer Madeleine Holden that dismantles the idea that a shortage of men is creating a generation of frustrated single women: "Dick is abundant and low value." What Holden is essentially saying is that, contrary to Birger's argument, there's actually no shortage of single men on hookup apps like Tinder and Hinge. (In fact, on Tinder men outnumber women 2–1.) But with their tendency to send dick pics, slut-shame women and ask for nudes right off the bat, single men on these apps are just, well, kind of awful.

"When I was in the dating scene, it never struck me that there was a lack of single men," Rebecca, 27, told Mic. She cited Holden's tweet as the reason why she never settled down with any of them.

But even if a woman combs through the abundance of dicks and finds one of high value, she still has plenty of reasons not to settle down right away, such as prioritizing their career or wanting to spend more time with friends.

"If anything my friends and I are bombarded with too many dates, too many men with good jobs and nice clothes coming up to talk to us at bars," Angela, 30, told Mic. "I've actually been proposed to once by a boyfriend. I broke it off. That's just not what I have planned for life."

Too much of a gamble: But there's also another reason why young women might want to stay single: They have a mistrust of marriage that comes from having witnessed firsthand one (or many) fail. In fact, studies indicate that many modern couples avoid marriage for fear of eventually divorcing, like members of their parents' generation.

"My parents' marriage wasn't so great, and I just don't see a need for marriage," Norah, 27, told Mic. Lisa, also 27, echoed that sentiment: "I think of marriage as the ultimate gamble — you're essentially gambling that the person you love in your twenties (or whatever) will still be the person you love when one of you draws your last breath, with no way of knowing how you'll both change and grow in between."

"I'm a one-day-at-a-time kind of girl, and the idea of legally binding myself to another person for the rest of my life doesn't sound great," she continued.

A full life, without a ring: Regardless of how many marriageable men are around, many women are remaining unwed because life is full of other outlets for success: career, creative pursuits, travel, family, friends, sexual satisfaction, odd Twitter hobbies and more. It's not surprising that single women are also more likely to have active social lives compared to the coupled up.

"I see my single status as something of a passport," Angela said. "I get to meet, work with, dance with, laugh with and sleep with whoever I want to at the time. I don't see anything changing my mind."

Women choosing not to get married is a valuable and voluntary path for many women. It's not just the default setting of a generation that doesn't have enough matches to go around. And these types of lifestyle choices — which is exactly what they are, choices — can't just be explained by statistics.

"I spend my 20s focusing on what I can control: my health, education, career and independence, one day buying my dream home by the sea, traveling," Sandra, 28, a resident of Michigan, told Mic. "I can't let anyone in if I'm not OK with myself first."