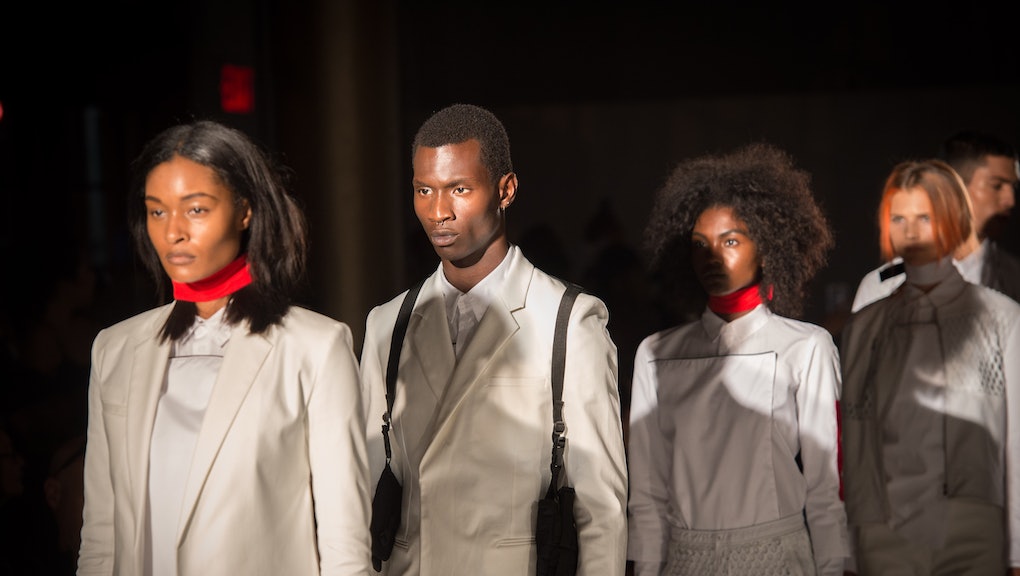 But when he did, his show became much more than a display of fashion. On Thursday, when he showcased his Spring 2016 collection, he confronted the issue of police brutality with a powerful mix of video, clothing and live graffiti art.

The 10-minute video, which played before the runway show, was shot in black-and-white and opened with the killing of Walter Scott, an unarmed black man shot by police officers in South Carolina in April. Then came footage of black teens who were brutalized by police at a Texas pool in July. Then there was Eric Garner, being choked by police, with his final words: "I can't breathe."

Only then came the clothes.

"If I'm going to be the black designer," Jean-Raymond told Mic, "I'm going to tell it my way."

Every detail sent a message: Gunshots sounded as the models walked. Red paint appeared in lines down the backs of jackets and spattered on shoes evoked blood. Garner's final, now-iconic last words were written in black across the models' all-white boots.

As they marched along the runway, graffiti artist Gregory Siff spray-painted and wrote on their utilitarian jackets. When the final model turned to walk off the runway to close the show, written across the back of her jacket three times was the word "breathe."

The words represented not only an ode to Garner, but also served as a reminder of the countless black Americans who have to live and breathe in their black bodies everyday.

The clothes also included netting, straps and tight collars, which Jean-Raymond told Mic afterward were intended to evoke the entrapments that hold the black body.

He was specifically inspired by the images of Ota Benga and Saartjie Baartman, Africans from the Congo and South Africa whose bodies were put on display in America and in Europe during the 1900s and 1800s.

But the video and the people in it were the most powerful iteration of Jean-Raymond's message. The film contained not only footage of black killings and abuse, but also interviews with the families of Sean Bell and Michael Brown, as well as influencers such as Usher, Kendrick Lamar, designer Marc Ecko and fashion critic Robin Givhan — whose viral story for the Washington Post last month broke the news that Jean-Raymond would tackle race in his show.

She and other black members of the fashion establishment sat in the front row, as did family members of victims of police brutality. That includes Jean-Raymond himself.

Just a month ago, he was standing outside a friend's apartment talking on the phone. He had recently injured two of his fingers, which were jutting up and bandaged with black tape. The police, he says, mistook his two injured fingers for a gun. When he turned around, he had two guns pointed at him.

That's when he knew that he had to do the show. Despite the backlash, the questions, the misunderstandings and the money that he might lose (and already has, he told Mic), this was Jean-Raymond's story to tell. He chose to enter the conversation on a platform that often brushes race but rarely addresses it directly on the runway — all the while grappling with whether this would pigeonhole him, as he often is, as a "black designer."

"If you're going to put me in this 'black designer' category, at least let me tell a story," Jean-Raymond said.

It's serious business, and the somber tone of the crowd reflected the difficulty of reliving the brutality. What was evident in the designer's disposition after the show, however, was his confidence. As he laughed and joked with friends, hugged his niece and amiably shook the hands of strangers, it was clear that this show was Jean-Raymond's contribution to breaking some of the chains that have shackled, and continue to shackle, black bodies.

"I feel a little freer after this," he said.