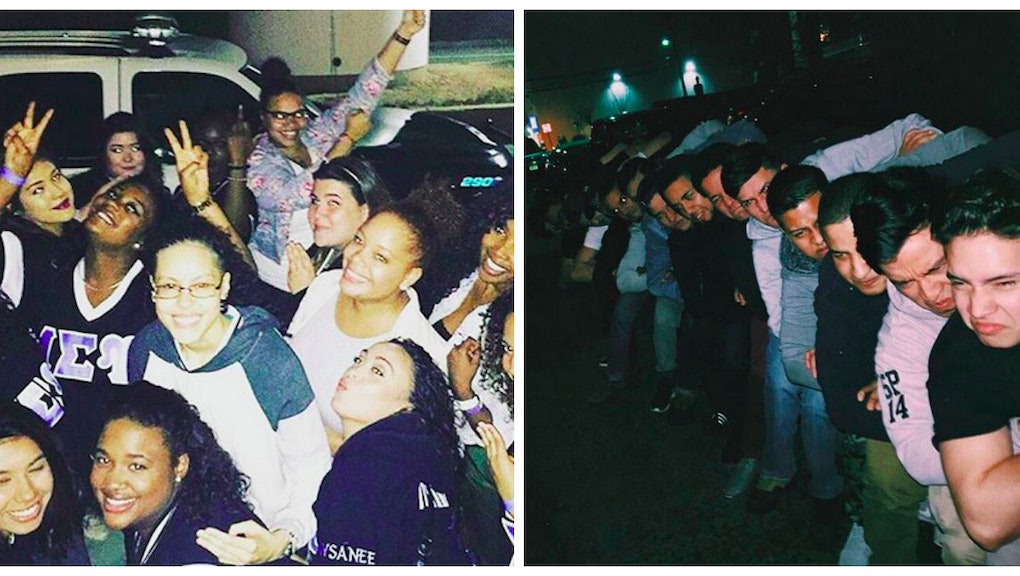 Between racist chants, perpetuating rape culture and tacitly allowing actual assaults to occur, many have questioned whether colleges should ban Greek organizations altogether. Thirty fraternities were shut down in March alone, according to the Huffington Post. In fact, the National Association of Insurance Commissioners ranks fraternities as the sixth worst insurance risk in the country, just behind hazardous waste disposal companies and asbestos contractors, attorney Douglas Fierberg and paralegal Chris D. DeJong wrote in TIME last year.

Nonetheless, Greek organizations can also create safe spaces for college students of color as well as students who value diversity and acceptance more generally — and plenty are attempting to do just that.

Apart from historically black Greek organizations, cultural/multicultural fraternities and sororities began to emerge in the 1980s, through students' desire to join groups that embraced and celebrated their own culture and other cultures, according to the National Multicultural Greek Council.

Members join based on the core value of multiculturalism, which is generally defined as "a concrete commitment to acknowledge and celebrate all cultures equally through our programming, public service outreach efforts and community education" and treating "all aspects of cultural identity with unconditional respect and equality," NMGC president Jen Rencher told Mic.

Historically black organizations — largely organized under the National Pan-Hellenic Council — have also long-existed on campuses across the country for decades for similar reasons. Historically black fraternities address their members' unique interests, including a network of allies in the face of experiences like "discrimination, [and] not having access to certain things, not only within the university but outside of it as well," Rafael A. Ramirez of Columbia University's Eta chapter of Alpha Phi Alpha Fraternity, told Mic.

Members of these organizations create safe environments for their members in many ways that is different from their mainstream counterparts. Here are the biggest way they do so, according to members themselves.

"Most of our groups do not participate in Rush," Rencher said. The process varies from group to group, she said, but to join, prospective members must "fill out an application, provide letters of recommendation, participate in community service, provide a résumé and transcripts, write an essay and go through an interview process."

That rejection of violence and excessive alcohol consumption carry past rush and into the culture of these organizations at large, Ramirez said. Brotherhood in his fraternity, he said, is founded on authenticity and respect.

"Brothers will check each other to make sure that everyone is respecting each other and it's a safe community for anybody to come into," Ramirez said of his own experience. "We want to create an environment where, however you identify, you feel comfortable enough to want to be around us and participate in whatever is going on."

This value carries well beyond the organization's social profile as well. When Ramirez took time off from school last year to help organize the Millions March, a mass rally in Manhattan to protest police violence and and institutionalized racism, for example, the first people he turned to for support were his brothers.

"Who else was actually going to support something I cared so much about?" he said. "I realized it's the group of men of color who understand those kinds of struggles."

Rencher added, "For students of color, joining a mainstream organization can be intimidating. Even if the members are welcoming, which they typically are, their programming and community service may not be focused on uplifting students of color communities."

"Multicultural organizations create a safe space where people of all colors, religions, sexualities and gender expressions feel at home," she said.

They serve the larger community, too. To be fair, mainstream Greek organizations incorporate community service into their missions. Fraternities across the U.S., for example, donated at 3.8 million hours of community service and raised $20.3 million during the 2013-2014 school year, according to the North-American Interfraternity Conference. But fighting for a deeper sense of equality is central to the mission of multicultural Greek organizations, according to Felicia Bowins, a member of the Delta Sigma Theta sorority at the College of William and Mary.

Unlike other Greek organizations, multicultural Greek organizations "were and continue to be largely influential in the fight for social justice and equality," she told Mic. Being a part of a sisterhood of women "who share the same desire to positively impact the world that I do" has been the most valuable part of her experience in the sorority.

Ramirez agreed, noting that Alpha Phi Alpha conscientiously focuses on helping communities that are particularly marginalized. His fraternity, for example, uniquely works to register voters, especially unregistered people of color, as this population has been "historically shut out of the political process, and [yet] voting is one of the most important civic duties we have," he said.

And their efforts are paying off: In 2014, NMGC completed 35,528 hours of volunteer labor and donated $62,096 to philanthropic causes in the fall alone.

They create an accepting space for marginalized identities. No matter the diverse rainbow of faces presented in brochures, most traditional colleges in the United States are still predominately white. A recent Georgetown University study, for example, found that between 1995 and 2009 at the 468 most selective four-year colleges in the United States, 75% of new freshmen enrollments were white while only 8% were Hispanic and 7% were black.

Given this context, students of color have historically — and continuously — feel compelled "to create their own kinds of spaces to bond beyond what they were able to do in a classroom setting," Ramirez told Mic.

It's this type of uniquely accepting atmosphere that creates "an extremely deep sense of pride" that continues well beyond one's time at college, Bowins confirmed. Members "remain active in doing their organization's work long after their college days," she told Mic.

Of course, just like mainstream Greek organizations, it's likely that these are hardly the universal experiences of all members of multicultural fraternities and sororities. But the model these alternative spaces have created undoubtedly serves as a beneficial challenge to all who hope to create communities based on brotherhood and sisterhood. Rather than focus on banning Greek organizations, therefore, it may be better for all to look instead to the organizations using this structure as an opportunity to educate and elevate each other rather than denigrate others.