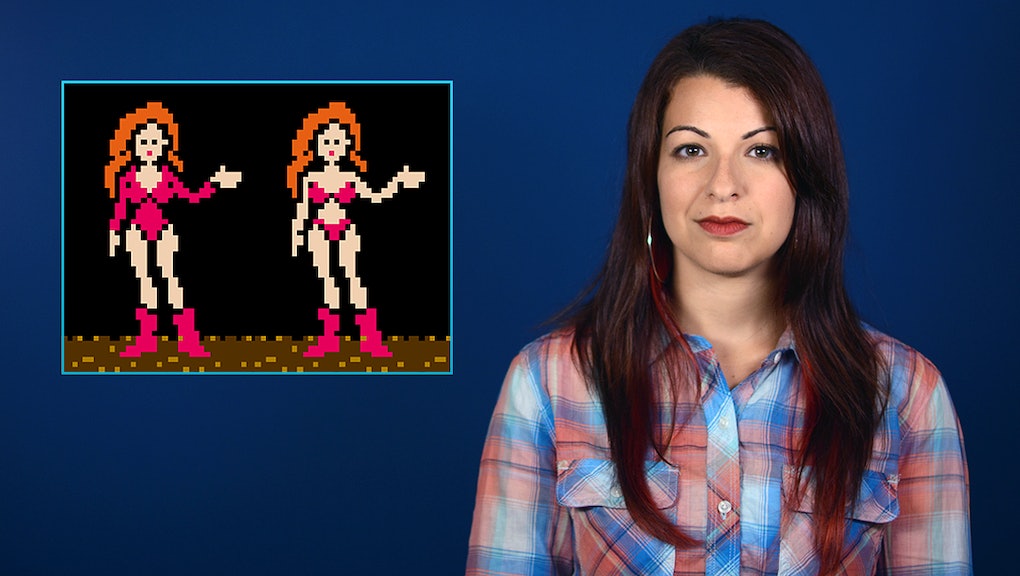 These Misogynist Video Games Use Women as Rewards

Samus Aran, a prototype for almost every female protagonist in video games since her debut in 1986, usually wears a hulking power suit and a helmet that obscures her face.

But we all just want to know what she's wearing underneath, right?

Though Samus, star of the Metroid series and considered the most badass woman in video game history, is an ass-kicking video game pioneer, the game's creators include a reveal as the credits roll. Finish fast enough, and a cut sequence shows Samus taking off her armor to reveal a cut-out bikini.

Imagery of the first female video game protagonist (other than Ms. Pac-Man) coexists with the first chance to see her in a bikini, for seemingly no reason. In a new Feminist Frequency video, Anita Sarkeesian defines this phenomenon, which she calls the "women as reward" trope:

When women (or more often women's bodies) are employed as rewards for player actions in video games. The trope frames female bodies as collectible, as tractable or as consumable, and positions women as status symbols designed to validate the masculinity of presumed straight male players.

The treatment of women as rewards for player actions manifests itself in a few different ways:

In games like Ride to Hell: Retribution (2013) or The Witcher 2: Assassins of Kings (2011, pictured below), saving a character in a game gets you more than just a "thank you."

In a more innocent example, the player with the highest score in the Teenage Mutant Ninja Turtles (1989) arcade game gets a kiss from journalist and friend April O'Neil at the end of the round.

After working together to defeat a level, co-players must then fight each other for a kiss from captive girl Marian in the arcade game Double Dragon (1987).

Mash a few buttons on the home screen of Rings of Power (1991) and the usual cartoon dog on the screen (left) is replaced with a topless woman.

This is an example of a secret "Easter egg" which is meant to be found by hardcore gamers who veer off the game's usual path to find them.

Entering the code "(O) (O)" will grant you access to a secret character named Daisy in Tony Hawk's Pro Skater 4 (2002). In lieu of the usual skating tricks, Daisy has a slew of sexier, stripper-esque moves.

Players of Ratchet and Clank (2002) can make a female character's breasts grow by jumping around her. Shaking your controller during a video chat with your own therapist in Metal Gear Solid 4: Guns of the Patriots (2008) will make the therapist's breasts start to jiggle.

Why do these small moments matter so much? According to Sarkeesian:

These characters aren't even taken seriously. "They communicate to players that yes, these women exist for players to exploit or experiment with for their own amusement," Sarkeesian says.

Players who wish their female characters would slip into something more comfortable can do so in many popular video games, especially the Resident Evil franchise.

The franchise, which is known for its many female protagonists, has several alternate outfits players can unlock. Rebecca Chambers (top row, left) is a police officer and medic who you can dress up as a naughty nurse. Jill Valentine (top row, middle) is a special ops agent with a pirate costume. Claire Redfield (top row, right) is a human rights professional who can transform into a motor sport umbrella girl. Sherry Birkin (bottom row, left) is a government agent but can also wear a schoolgirl uniform. Helena Harper (bottom row, middle) is a Secret Service agent and former CIA agent who swaps into a sexy cop costume. And Sheva Alomar (bottom row, right) is an anti-bioterrorism agent who gets a tribal savage bikini to wear.

Here's a closer look at that last one, which treats one of the few playable black women in video game history with a double dose of both racism and sexism.

For players of Conan (2007) or God of War (2005), getting into bed with a woman or saving a half-naked woman chained up to a tree is a way of gaining experience.

Having sexual encounters in the original Witcher (2007) gives players a collectible card of their conquest, which players can peruse at their leisure.

In Sid Meier's Pirates! (2004), marrying a beautiful girl gives you a better chance at becoming a governor in the game. Women's looks are rated in the game, and ending up with an ugly wife may hurt your chances of becoming successful.

Even trying to ogle women who don't want your attention is a reward system in some games, like Asura's Wrath (2012), where looking at a woman's breasts when she tries to cover them up gets you a trophy. In Lollipop Chainsaw (2012), the player can earn a trophy for looking up protagonist Juliet's skirt. The name of the achievement: "I Swear! I Did It by Mistake!"

All these examples reinforce what Sarkeesian calls "trophyism:"

Trophyism is the tendency for men to view women as objects to be collected and displayed as status symbols of their sexual progress or virility. These "trophy women" then serve as a way for men to assert their social status among and relative to other men.

Taken together, these video game phenomena reenforce male entitlement, or the "conviction that men are owed something solely based on their gender," says Sarkeesian.

Sarkeesian is not, however, claiming that video games cause male entitlement, but is rather invoking sound science that shows that video games do affect the way people relate to each other, especially across genders.

"Social science indicates that one of the primary ways we learn about the world and our relationship to each other is through a process of observation and imitation," she says. "Human beings also learn by seeing something modeled for us, especially when the modeled actions are accompanied by rewards of punishments."

Though not responsible for male entitlement, video games, Sarkeesian says, do reinforce the idea that men are entitled to women's bodies. "Because video games are constructed around these formal input/ output systems, they can be an especially powerful tool for reinforcing cognitive patterns by modeling and rewarding player behavior," she says.

By recognizing this, and understanding how these games work, we can get one step closer to telling misogyny "game over."