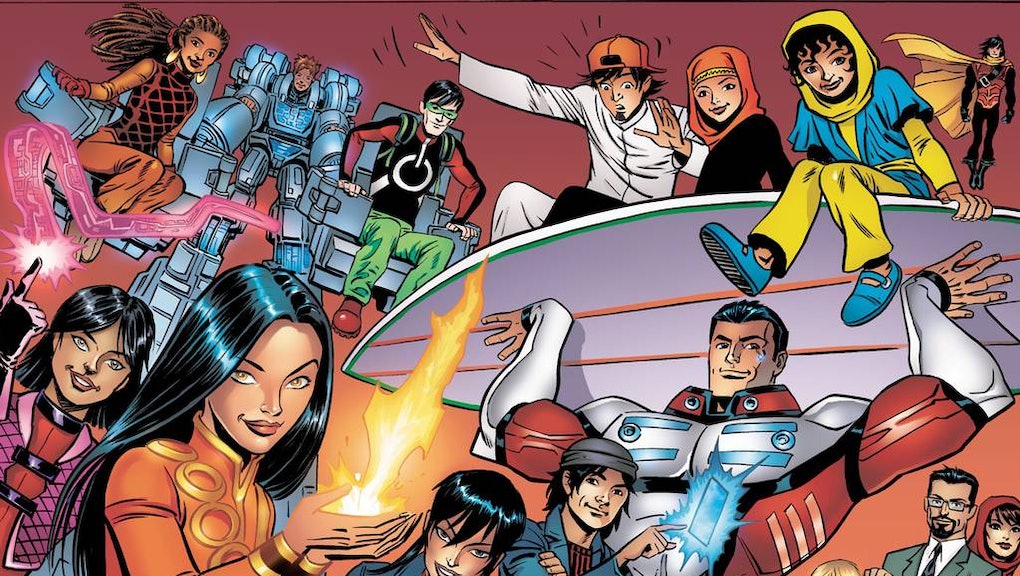 These Are the Badass Muslim Superheroes the United States Needs

Calling for diversity in superhero movies is like playing a broken record: You'll hear the same refrain a lot, but you won't make much progress.

Representation of nonwhite voices and faces in Hollywood is generally terrible, and the comic book cinematic genre is reflective of that. It's taken a decade for Marvel Studios to make a movie about a nonwhite, nonmale hero. There's little to no hope we'll see something truly out of the box, like a film about an Arab or Muslim hero.

What makes the snail's pace of cinematic diversity extra frustrating, however, are the increased efforts of comic book writers and publishers to make their worlds even more diverse than they already are. Marvel Comics alone has brought back Red Wolf, its first Native American superhero, for his own comic recently. It also made the current incarnations of Spider-Man, Thor, Captain America and the Hulk nonwhite or nonmale heroes.

These characters are proof that heroes don't need to come in the same packages to be legendary. That's why Muslim heroes in comics, particularly in modern times, are so important. For a country with citizens that too often espouse anti-Muslim sentiment, these characters aren't just nice; they're necessary. The more comic publishers big and small include them, the more familiar they'll become to readers — and the more comfortable Americans will become with real Muslim people, too.

Like other heroes on this list, the Pakistani cartoon Burka Avenger features a woman clad entirely in black. Unlike the 99, however, she only wears it when fighting crime. She's a hero who fights crime, much of it gender-based, by owning what many see as a symbol of suppression and turning it into a tool in her repertoire.

As Mic's Natasha Noman wrote in April, "Burka Avenger could not be more important for countries like Pakistan, Afghanistan and India, where gender bias is rife and girls are raised with few role models." Creators translated the series into Hindi, Tamil, Telugu and English to spread its influence even further, winning a Peabody Award for television excellence as well. She's exactly the kind of superhero we need more of in the U.S.

Forget a single Muslim superhero: What about nearly a hundred? The 99 are a team of Muslim superheroes created by Teshkeel Comics Naif Al-Mutawa. Each represents one of the 99 names of Allah as described in the Quran, with different attributes defining them. There were only 35 issues of The 99, but it wasn't exactly a niche comic — the team even got a crossover with the Justice League. President Barack Obama even called them "the most innovative response" to anti-Muslim sentiment in the U.S.

Unfortunately, The 99 was also controversial thanks to its depiction of superheroes as identities of the Muslim god and its burka-wearing characters. The comic series was quickly banned in Saudi Arabia, and a planned animated series for the U.S. never materialized. It's a shame; as President Barack Obama said, this team really was an interesting way to familiarize Americans with a group too often seen as enemies.

Watch the sand around you — it may actually be Dust. Sooraya Qadir, a mutant and a member of the X-Men, is an Afghani hero with the power to transform herself into a sandstorm. A Sunni Muslim, she wears traditional garb — though it's an abaya, not a burka. Still, she and Burka Avenger look nearly identical in their suited forms.

Like other X-Men, Dust was educated at Professor Charles Xavier's institute. Particularly impressive is the fact that Dust is shown as a truly good hero. This flies in the face of usual depictions of Arab characters in Western culture. She even sacrifices herself fighting the villainous Donald Pierce, though she was soon revived by her ally Ink.

If Josiah al hajj Saddiq looks familiar, it's probably the star on his chest. Born Isaiah Bradley, he was tested with a variant on the Super-Soldier Serum regimen used on Captain America himself, Steve Rogers. Bradley was one of several to be tested, but the only one of those tested with the variant to actually survive and become stronger because of the serum. He converted to Islam and made pilgrimage to Mecca, taking the name Josiah.

Eventually, Justice hung up his shield, instead becoming a Muslim minister in Brooklyn, New York. It was only thanks to the formation of Crew, a team of four heroes, that he started fighting again. Since he fits in with the Captain America universe, it would be an impressive move on Marvel Studios' part to find a space for him in the Avengers world.

Like Hulk and Captain America, Kamala Khan appeared in her own comic series as Ms. Marvel, inheriting the mantle from Carol Danvers. A Pakistani-American from New Jersey, Kamala fills the title well with powers including the ability to stretch her body and healing rapidly. She's also, adorably, a fan of Marvel heroes, even revealing herself in her debut comic as Ms. Marvel as a fanfic author.

Ms. Marvel may not be as big of a hero as the main Avengers, but Kamala is still a major addition to the universe. With the other nonwhite current incarnations of Marvel's heroes, she represents what progress in the comic book world can really look like.