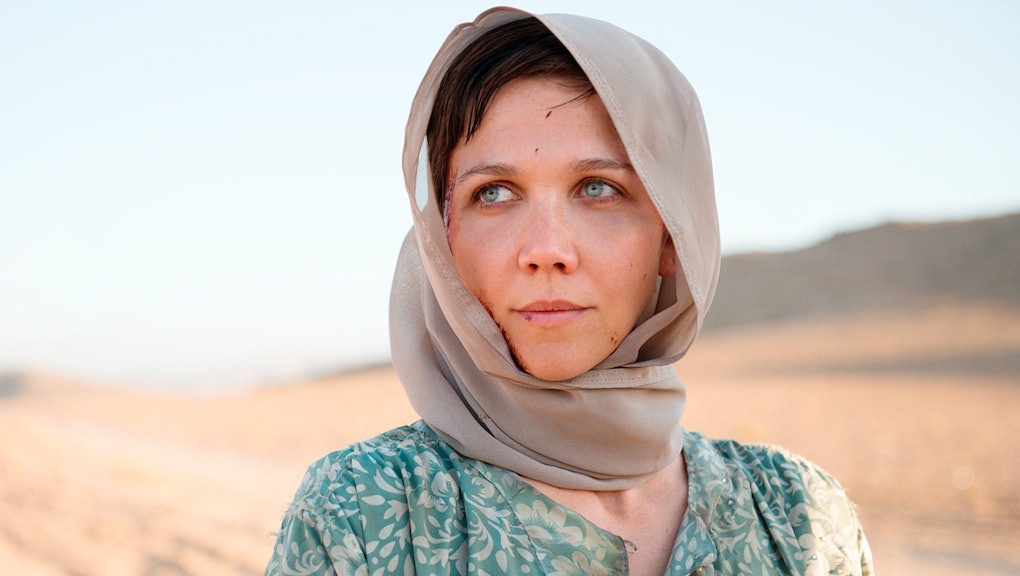 If There's a Way to Talk About Sexual Abuse on TV, 'The Honorable Woman' Got It Right

"Who do you trust?" asks Baroness Nessa Stein (Maggie Gyllenhaal) at the start of every episode of Hugo Blick's The Honorable Woman, a miniseries set amid the ongoing rift between Israel and Palestine. "We all have secrets. We all tell lies," she continues, finally admitting that, "It's a wonder we trust anyone at all."

She's speaking, of course, about that clichéd spy thriller genre dictum: "Trust no one." Yet given the various instances of sexual violence that mark Nessa's character arc in the series, they speak just as easily to the fascinating discussion of sexual abuse that this Emmy-nominated miniseries brings to the forefront with aplomb and tenacity.

By episode six, this opening voiceover bleeds into blurry images of Nessa at a bar, the camera losing focus as a man addresses her. When we catch up with the couple at a nondescript apartment, she is drunkenly asking whether the man "has a bed, at least."

Issues of secrets and trust, central to the show's grammar, here are vividly connected to sexual abuse. Fully aware of who Baroness Stein is, the man takes unexpected glee in humiliating Nessa, showering her with alcohol and teasing her for probably having "gotten away with this before." He means an anonymous sexual dalliance. It's true: Early in the series we see Nessa engage in consensual sex with her main security guy.

No sexual relationship in the show, it turns out, is devoid of the power games and secrets the spy genre requires. When it's clear the man will do as he pleases with her, we see Nessa writhing on the floor, much too confused and drunk to fight him back, merely pleading, "Let me go," less a whimper and more a hollow command. We then see him throw a bottle at her.

The camera follows the bottle as it empties itself out over the carpet. It's a stylized way of representing the sexual violence taking place off-screen; alcohol becoming both reason and weapon, excuse and cover for what befalls Nessa within those walls. It's only later, when we see her groggy and bleeding out on the street, that we see the full extent of the assault.

The shot of the alcohol bottle may seem a cheap way to distance viewers from this horrible episode of Nessa's life, but in denying us access to Nessa's humiliation, it gives weight to her character's integrity, refusing the unnamed, vicious man control of the narrative.

This isn't, of course, the first instance of sexual violence in the show. In episode four, we witness Nessa being raped by her kidnapper eight years prior. The scene was joyless, explicitly framed in terms of the sociopolitical consequences it would, quite literally, engender. Nessa's subsequent pregnancy, it turns out, is yet another calculated chess move on the part of the man who'd despised her father enough to have him killed and her abducted. Abstracted from the actual violence imposed on Nessa's body, we'd be tempted to look at these set of events as examples of the way rape has been co-opted by prestige television to give its female characters a complex backstory.

Yet neither scene of sexual abuse relishes its own potentially titillating content. Both are quite buttoned-up affairs with little joy derived by perpetrator, victim or audience alike; we are not given a vantage point from where to find each scenario either lurid or alluring. This is far away from the excessive sexual violence that greets and is represented in, say, HBO's Game of Thrones.

It's not just that Blick's camera refuses us access to what Nessa lives through. Her storyline is a more empathetic and layered approach to depicting sexual violence than those sprinkled over dark cable dramas every other week. These sexual assaults aren't incidental events; they become central to the show's themes and style.

Nessa, for example, spends much of the first episode physically isolated, always flanked by security detail, rarely letting her cool and detached exterior betray any emotion. That she sleeps in a pristine panic room by herself just further shows us how her kidnapping and the sexual abuse she was subjected to have come to define her current lifestyle (seeing an awkward, emotional Nessa in flashbacks mere days before she's kidnapped makes this point even clearer).

That is not to say Nessa is just a victim. She has, after all, built a name for herself taking over the family business, been named a Baroness and seems like the type of "powerful woman" cable television has been praised for representing. That she's allowed to navigate these two seemingly incompatible narratives — a haunted victim who can't let go, a brave survivor who need not look back — shows a complexity about Nessa Stein. Blick's writing and Gyllenhaal's performance only make this even more central to The Honorable Woman.

Agency, shame, trust and power — these are the themes in which the miniseries continually muddles in terms of political intrigue. They become more fascinating, however, precisely because they echo Nessa's sexual past and present.

As Blick put it in an interview with the Guardian last year, "Too often, when issues of rape become the kernel of a female character ... within dramas, within the context of a thriller, rape is used as a storytelling device so glibly. We make it the middle of our story." More show-runners should follow his lead and grace our screens with stories about women as complex and nuanced as that of Nessa Stein.

The Honorable Woman is nominated for three Emmy awards, including outstanding limited series. It is available for rental and purchase on iTunes and Amazon.