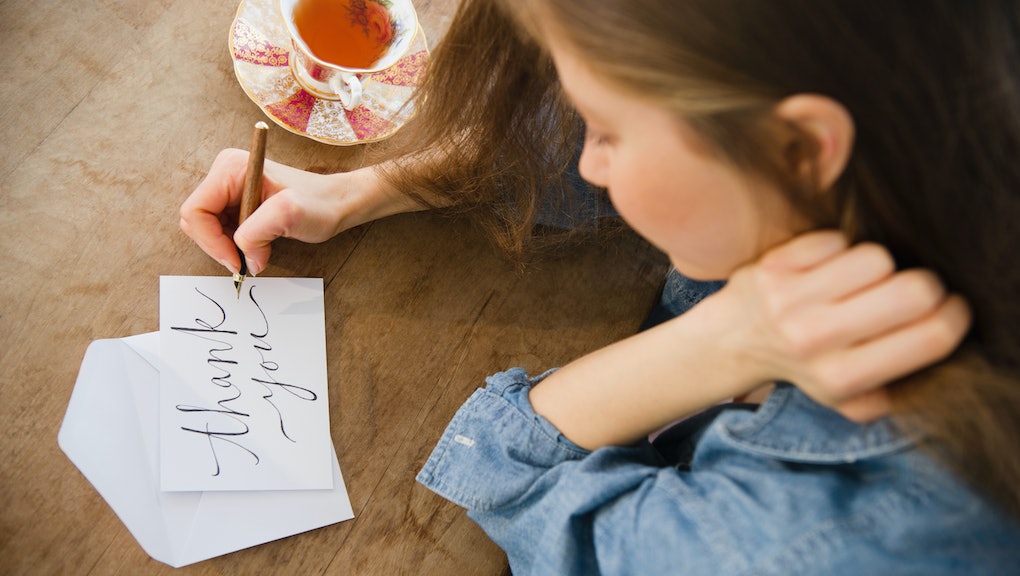 Science Has Good News for People Who Write in Cursive

A long time ago, there was once something called handwriting.

The ancient system of putting ink to paper (or papyrus) ultimately became rarer and rarer, especially as, during the 1990s, an increasing number of people began typing on computers. It's something that's never sat well with traditionalists like Adam Brand, chairman of the British Institute of Graphologists.

Among people like Brand, few things are as sacrosanct as cursive, also know as script. The formal style of writing is instantly recognizable from things like college diplomas and the Declaration of Independence. Supposedly developed to preserve fragile quill pens, the writing has become scarcer in the United States in recent years. But even as its popularity wanes, science has good news for script's shrinking cohort.

In the abstract, researcher George Early speculated that, "One possible explanation is the continuity of movement in cursive, whereas in [print] writing, attention is given to single letters. The continuous line in writing a word provides kinesthetic feedback about the shape of the words as a whole, which is absent in manuscript writing."

In addition, cursive writing has been shown to improve left-right brain synergy and even promote the brain's language and memory functions. On a practical level, it's faster, allowing cursive writers — whose pens never leave the paper — to breeze through words with greater velocity. That additional fluidity was how experts cited by the New York Times partly explained better performances by students who wrote their SAT essay in cursive rather than those who produced them in print.

The finding came as no surprise to enthusiasts like Brand. "The process of printing and stopping and so on does have certain disadvantages," he said. "The sensory skills you develop with cursive — the sort of awareness, you know — it does rather build these sorts of neural foundations, which are terribly important for other tasks."

Handwriting experts and graphologists also pointed out that science was not the only reason for keeping the form alive. Dianne Peterson, owner of Forensic Document Investigations, made a case for aesthetics. "Script is beautiful, if it's done properly," she told Mic. "We still need that in society."

So what's happened to cursive? Despite the evidence from science and enthusiasts alike, Americans are avoiding the style like the plague. Common Core, a set of U.S. federal education standards adopted by more than 40 states, makes no explicit requirement to teach cursive to students, and an increasing number of states have allowed it to fall by the wayside in favor of what's explicitly required.

Despite the efforts of a number of states and Montessori schools to keep cursive in the classroom, a 2013 study of 612 elementary school teachers across the United States found that more than 40% have stopped incorporating cursive writing into their curriculums.

The problem, too, is older than Common Core. Among students who went to U.S. elementary schools in the 1990s, only 15% used cursive on their SAT essay section, CollegeBoard reported. Within the popular media, stories likes this one by Vox suggest that the primary argument of cursive defenders stems from nostalgia about reading historical documents in their original form. Their report states "nobody has shown that there is really a major benefit to learning cursive."

However, myriad evidence reveals those fourth-grade cursive lessons really could pay off, and those who've managed to stick with the dying art form after all these years might truly be on to something. Plus, there's something to be said for making the world a more beautiful place with every stroke of a pen.

"What if every sign you looked at looked exactly the same, and there was no difference in font?" Peterson said. "It would be a pretty boring world."