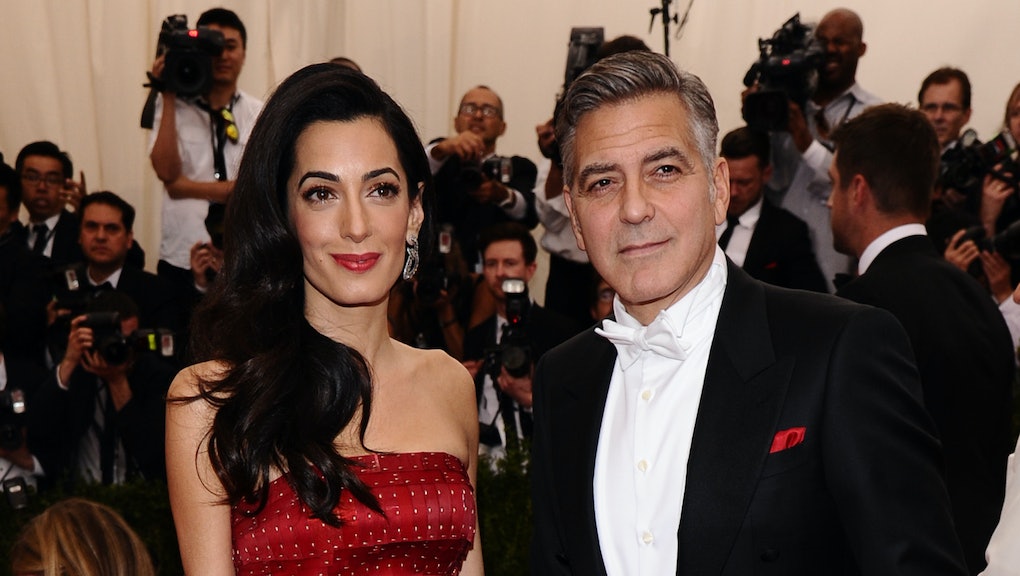 9 Times the Media Failed When Talking About Married Women

When human rights attorney and activist Amal Alamuddin married George Clooney, something odd happened: The media stopped referring to her as Amal Alamuddin, the attorney and activist. Instead, they referred to her as Amal Alamuddin, the wife of George Clooney. Almost immediately, Alamuddin's numerous accomplishments took a backseat to the successes of her actor husband, even though, let's be honest, Clooney's resume pales in comparison to hers. (Up in the Air is a great movie, but still.)

Alamuddin's marriage to Clooney wasn't the first time the media failed when talking about married women. When women who are enormously successful in their own right tie the knot, the media tends to refer to them solely by their marital status — regardless of whether their fame or success exceeds that of their partner. In fact, we couldn't even find any photos that depicted these women without their spouses.

Here are eight more women who've been victims of this troubling trend, and why it needs to stop.

When Zach Galifianakis' wife Quinn Lundberg — a trained ballerina and the vice president and cofounder of Growing Voices, an organization that works to build sustainable projects at a grassroots level — went into labor, her name was rarely found in the headlines. E!'s headline for the news? "Zach Galifianakis' Wife in Labor, Funny Man Ditches His Toronto Movie Premiere." Lundberg's name didn't even appear until the second paragraph.

When fashion designer L'Wren Scott tragically took her own life in March 2014, the fashion world mourned. The mainstream media, however, focused entirely on her boyfriend, Rolling Stones singer Mick Jagger. In the weeks following her death, Scott's meteoric rise from model to world-famous designer was completely overshadowed by the man with whom she'd been in an on-again, off-again relationship. In fact, when the Mirror covered Scott's death, the headline read "Mick Jagger's Girlfriend."

You don't have to be a die-hard fashionista to know that Georgina Chapman is a model and cofounder of the fashion house Marchesa. She's also the wife of film producer Harvey Weinstein. But when Weinstein was accused of groping another woman, the Daily Mail simply referred to Chapman as "Weinstein's wife." Her career as a fashion designer was mentioned as a mere afterthought.

4. When Jimmy Fallon's wife Nancy Juvonen had her second child.

Considering how often she's referred to merely as "Jimmy Fallon's wife" or just "Nancy," you'd have no idea Nancy Juvonen was a film producer and co-owner of her own production company Flower Films. When the couple welcomed their second child, US Magazine referred to Juvonen as "wife Nancy" without even mentioning her actual career.

5. When Jessica Seinfeld was sued for copyright infringement.

Jessica Seinfeld is the author of two cookbooks and the founder of Baby Buggy, a charity that provides necessary items to families in need. But any mention of her accomplishments is usually followed by a reference to her spouse, comedian Jerry Seinfeld. Even when Seinfeld was sued for copyright infringement following accusations she had plagiarized her cookbook, Deceptively Delicious: Simple Secrets to Get Your Kids Eating Good Food, the media couldn't resist referring to her not as an author, but as "Jerry Seinfeld's wife."

Last summer, it was reported that Hugh Jackman's wife, Deborra-Lee Furness, didn't want Jackman to work with Angelina Jolie (it was later revealed to be a joke). But headlines failed to mention that Furness is a wildly successful Australian actress, producer and director, as well as a member of the Advisory Committee for Film Aid International, where she works with refugees from all over the world.

7. When Huma Abedin's husband became embroiled in a sexting scandal (and when it happened a second time)

The 39-year-old Abedin is currently the vice chairwoman of Hillary Clinton's 2016 presidential campaign and previously served as Clinton's longtime aide. But when her husband Anthony Weiner was caught texting women dick pics and forced to resign from Congress, Abedin's résumé was the last thing on the media's mind. When it happened again in 2013 during his mayoral campaign, CBS News still referred to Abedin as "Anthony Weiner's wife."

8. When Trudie Styler was referred to as "Sting's wife."

In her youth, Trudie Styler was an accomplished actor and member of the Royal Shakespeare Company. She's also a well-regarded humanitarian, UNICEF ambassador and co-founder of the Rainforest Foundation. But have you ever heard her referred to as anything other than "Sting's wife"?

9. When Salma Hayek was mentioned in passing in a profile of her husband.

While one would imagine that it's pretty difficult to ignore the gorgeous 49-year-old actress, that's exactly what the Hollywood Reporter did when it profiled Francois-Henri Pinault, Hayek's billionaire French husband. While Hayek's name is far more recognizable than Pinault's, the piece nonetheless referenced Hayek in passing as a mere parenthesis. Ouch.