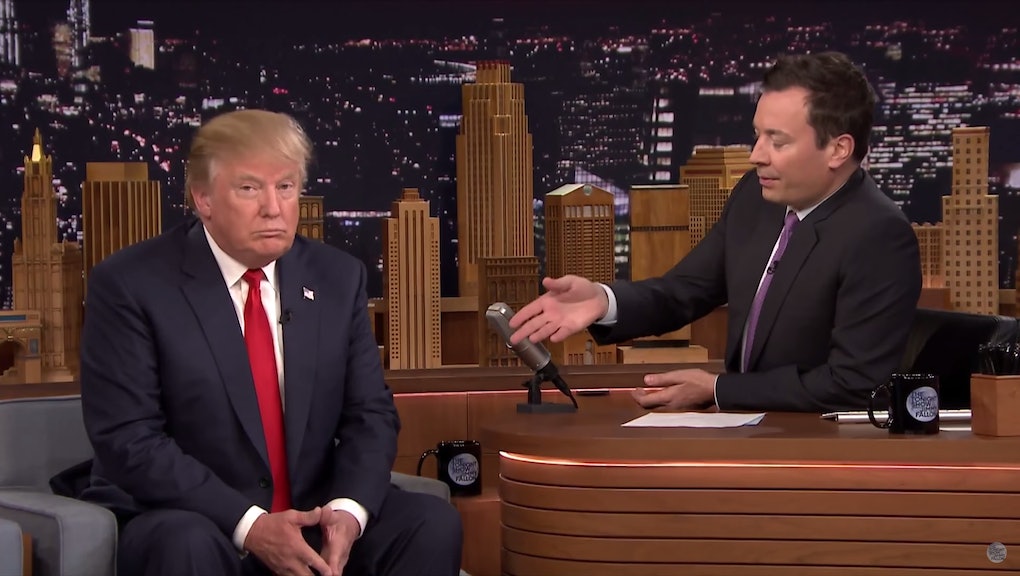 In one segment, host Fallon played Trump's reflection in a skit where the candidate prepared for his late-night interview by talking to himself in the mirror. He also sat down with Fallon for a more conventional interview, in which he discussed the economy and how he would build his promised wall on the U.S. border with Mexico.

Trump used his time on the show to talk about how he would create jobs ("just by doing it"), his potential future vice presidential nominee ("maybe Kanye West") and whether or not he has ever apologized to anyone ("sometime in the distant future if I'm ever wrong"). In turn, Fallon roasted the candidate.

Trump seemed at ease throughout both the joke and serious portions of the interview, casually making jokes about his own celebrity and accusations that his candidacy lacks substance. He also took time to brag about his front-runner status, saying that all other Republican opponents were the same to him.

"When did it become real?" Fallon asked Trump. Fallon admitted that, just months ago, saying Trump would be leading the GOP pack would have been considered a joke. "Was it always real?"

"Nobody believed I was doing it," Trump shot back.

Democratic opponent Hillary Clinton has "had a very bad time and I've never seen anything like it," Trump said. "I feel terrible about it," he continued to laughter from the audience.

"We may build it with immigrant labor. It's gonna be a great wall, and it's actually going to be a beautiful wall," Trump said of his proposed border wall with Mexico. "'Cause at some point it's gonna be called the Trump Wall."

Though Trump critics might chafe at the idea of Trump being treated with the same softball questions and humorous sketches as other candidates, his appearance on Fallon's show is yet more evidence the Trump campaign has more staying power than many pundits originally believed. As Trump continues to lead in the polls, he'll be making similar inroads to the traditional campaign circuit — including late-night talk shows.

Watch the videos below: