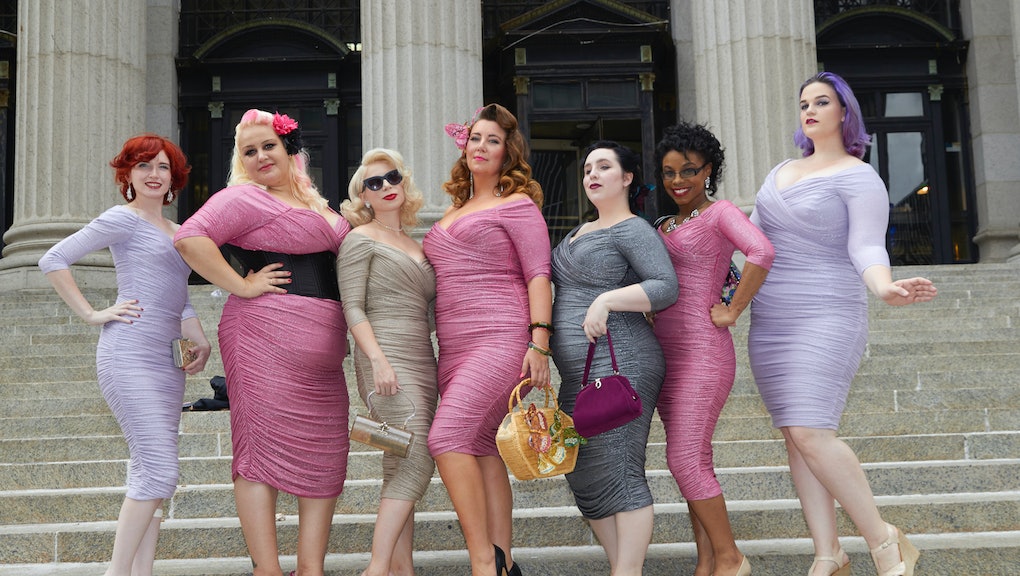 In one of New York City's most populated neighborhoods on Saturday, during the throws of New York Fashion Week, a group of women gathered in front of the post office on 33rd Street. They greeted each other like old friends, though many were meeting for the first time. Dozens of passers-by turned their heads to the ladies before making their way around the corner to the entrance for the season's fashion shows.

It was difficult to miss the group of women, which grew to more than two dozen. After all, each one was wearing the same curve-hugging dress in bold shades of red, emerald, lilac, pink and classic black and white.

They were there to prove a point: The right dress can look great on any woman, no matter her size or body type. The event was a flash mob organized by Pinup Girl Clothing, a California-based company focused on vintage-inspired designs for women. Pinup Girl Clothing had encouraged their customers in New York to wear the same "Monica" dress, with its off-the-shoulder sleeves and body-conscious silhouette. It was also an opportunity for the company's fans to thank the women behind the company that has celebrated all body types by designing clothes in a range of sizes.

"I like their message ... how they support everyone and they just want women to feel beautiful and I think that's a great message because it's needed," Elise Gannett, one of the customers in attendance, told Mic.

Body-positive since day one: At a time when the subject of body positivity and inclusivity is having a moment in fashion, Pinup Girl Clothing stands out to its loyal customers precisely because it has embraced the concept since the company launched in 1996. The company offers designs in sizes ranging from an extra-small to a 4X.

"We've been doing it since day one. Not because we thought we'd get recognition for it or a pat on the back or a cookie. We just did it because this is the right thing to do," Micheline Pitt, the creative director of Pinup Girl Clothing, told Mic.

When Laura Byrnes, the "supreme overlord" of Pinup Girl, launched the company, she wasn't trying to make a bold statement about body positivity, she told Mic. It just made sense to make clothes for women of all sizes, she said.

"Women need clothes, it's as simple as that," Byrnes said. "We want to do a great job giving you clothes." That simple philosophy motivates Byrnes and Pitt to offer clothing that empowers women to feel beautiful, the pair said. Taking someone's measurements is merely a detail in the process.

Offering such a range of sizes might seem like a simple enough accomplishment, but most clothing retailers section off their plus-size designs in stores and offer limited styles that are often drab when compared to "normal"-sized clothing.

"They think that their clothing is more important than the woman that it's on. And that's bullshit." - Laura Byrnes, founder of Pinup Girl Clothing

"Women are usually subjected to the opposite, which is, 'Here's some clothing. Now you need to look good in order to fit the clothing,'" Byrnes said. At Pinup Girl Clothing, they never want to send the message that a woman's body is the problem, she said. "When you give women clothing that just works for them," Byrnes said. "[The message you're sending] is, 'You're important, the clothes are bullshit.'"

A "thank you" for celebrating women's bodies: It's a message that has resonated with their customers who've grown over the years into an online community of women who support one another to accept their bodies and embrace their sexuality. Byrnes' and Pitt's no-holds-back approach to clothing and body image has made them a sort of celebrity among their customers who look to the women for inspiration. Some customers showed up to the event to meet other fans of the company, but mostly, it seemed women showed up to thank Byrnes and Pitt.

Kim Rogers, a customer at the flash mob, told Mic she has been a loyal customer of Pinup Girl ever since she tried on one of their dresses last year and "felt like a million dollars."

"I felt beautiful," she said. "I felt like it celebrated my body." Rogers said it's often difficult to find suitable clothing for women who don't fit the standard sample sizes in stores. Pinup Girl was different, she said.

Rogers said she wants to thank them "for caring about all bodies and wanting to celebrate all bodies, for wanting to make women feel beautiful."

The message of body inclusivity is one that is just barely reaching fruition in the culture at large, Madeline Jones, the editor of Plus Model Magazine, told Mic.

"Pinup Clothing has been a pioneer in our industry and it's very adored and well-received," Jones said. "They were one of the first ones to use an extreme size diversity in their campaigns. They used a size 3X model before it was popular, before Tess [Holliday] was in People magazine. So, I love that they love all women," Jones, who was in attendance at the event, told Mic.

The homepage on the website for Pinup Girl Clothing features models of differing body sizes, intermixed with one another seamlessly. It's a purposeful decision too. Byrnes and Pitt said when they're designing, they use a model of every size to try the clothing on, instead of relying on smaller models and then simply scaling up the design. It's those kinds of details, from using different sized models in the creative process to how they market the company that customers repeatedly singled out as signs of how inclusive the company is.

A "pinup girl," after all, isn't limited to a particular size. In fact, it wasn't the slender bodies and hourglass figures of the vintage calendar girls that stood out to Byrnes the most. Sure, the women often wore clothes that looked as if they'd been painted on and they were certainly sexy, Byrnes said. Still, the women always had on a smile instead of a come-hither gaze, Byrnes said. Pinup girls, she said, were smiling and having fun, in complete control of their sexuality.

"When I started the company, I said, 'That's what I want to do. I want to make clothing for pinup girls,'" Byrnes said. "For women who are in control. They're sexy, they're kind, they're intelligent, they're confident. They know what they want." That was the message she wanted the clothing to send: that the women dressing in pinup were dressing for themselves first and foremost.

The two of them have also been working with the philosophy that women always want to look sexy, Pitt said. The key to sexiness, Byrnes added, is confidence.

"I don't think you can be sexy if you don't feel comfortable and if you're not happy," Byrnes said. "You know, sexiness is, in a way, it's what happens when a woman, I feel, is fully realized and feeling really great." Byrnes said she never had a manifesto for the company, but that perhaps on a subconscious level she was pushing the idea that women can be sexy when they wear clothes they feel at ease in.

"The clothing has to be comfortable. You have to put it on and go, 'Oh, my god, I look fucking amazing,'" Byrnes said. "You have to be willing to walk around in broad daylight."

Sure enough, the women in attendance at the flash mob were doing exactly that. Street-style photographers stopped and asked for their photos. Tourists did too.

The women obliged, posing, hands on hips and throwing their head back and standing proud. They were smiling and looking into the cameras, much like the pinup girls Byrnes had been captivated by years ago.