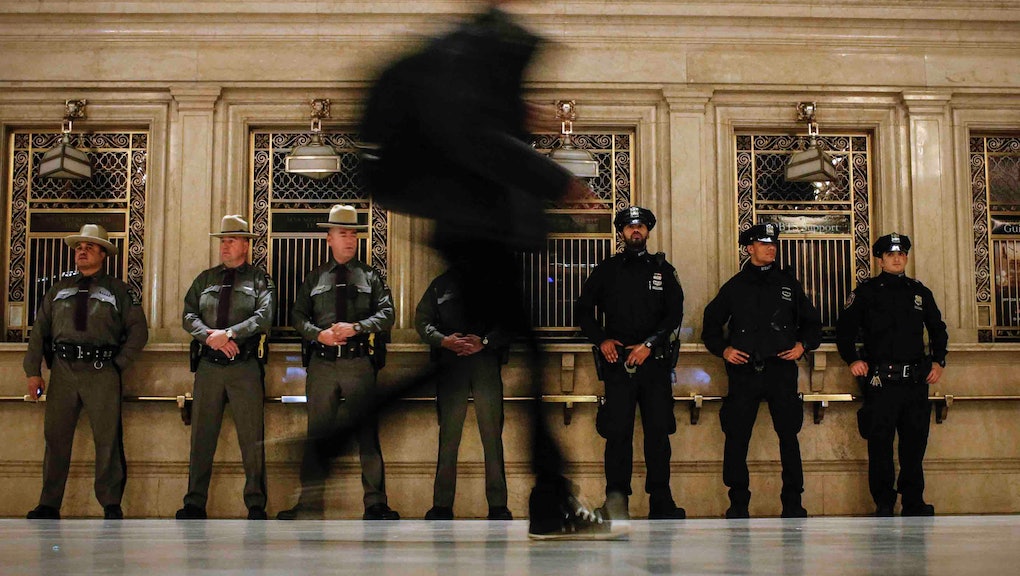 One Chart Reveals the Truth About America's "War on Police"

Most Americans have heard the argument there is a swelling and dangerous war on law enforcement officers. This notion is reinforced everywhere from within the police academy to media headlines that read "'War on Police': Line-of-duty deaths rise amid racially-charged rhetoric, anti-cop climate."

The data, however, suggests otherwise. Officer Down Memorial Page, a nonprofit dedicated to chronicling the number of law enforcement officers slain — records which date back to 1870 — reveals the number of officers killed by guns has been steadily declining since the 1970s, around when the so-called "war on drugs" began.

Furthermore, Federal Bureau of Investigation data for the number of officers feloniously killed, dating back to 1996, suggest a comparable pattern. In 1996, 55 officers were killed feloniously, compared to 27 officers in 2013, the last available year for this data.

After analyzing data for the total number of officers killed from the National Law Enforcement Officers Memorial Fund, the Washington Post concluded that 2013, in regards to raw numbers, was the safest year for law enforcement since World War II, while the death rate made it the safest in more than a century.

But some are telling a different story. Despite these numbers, news outlets routinely discuss the heightened dangers for law enforcement agents: On Thursday, Maryland sheriff Mike Lewis appeared on Fox News saying, "I've never seen it like this ... It's a scary, scary time for law enforcement in this country — it truly is." Even 58% of Americans believe there is such a war going on, according to a Rasmussen Reports poll published Sept. 2.

Examining the data on felonious officer deaths in myriad ways and different contexts lead to one conclusion: The rate of police killings is not increasing. There is the question, then, of why the opposite narrative prevails in public discourse. "The possibly exaggerated narrative of increasing risk for U.S. law enforcement has been one of the justifications used for the increasing militarization of America's law enforcement," American Enterprise Institute suggests.

Republican presidential frontrunner Donald Trump, for example, argues the police need to be empowered amid a flurry of threats and crime. Yet, over the past several decades, data reveal this country is only getting safer for law enforcement.