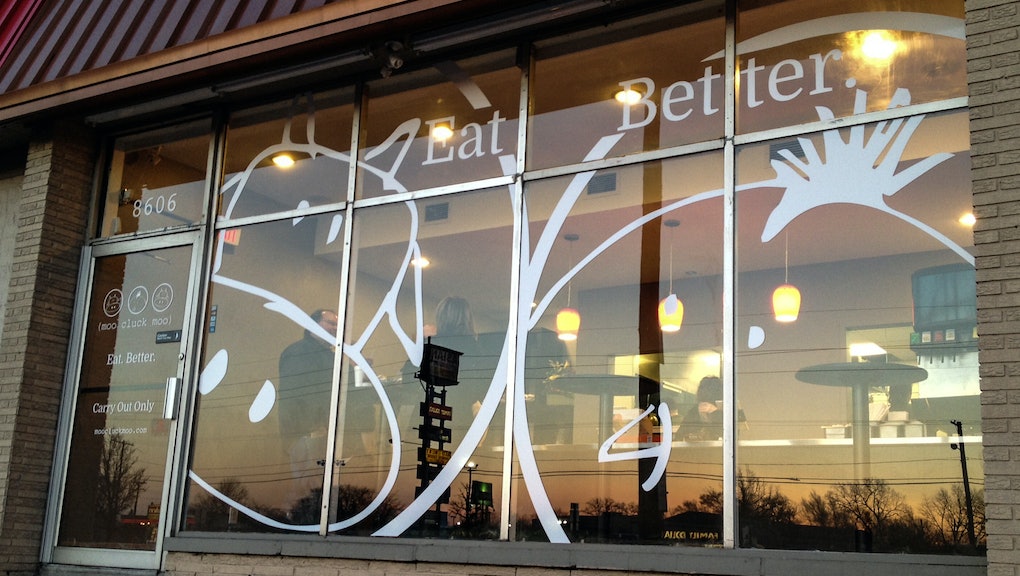 Whenever $15 minimum wage laws have been adopted anywhere in the United States, the increase is followed by a predictable course of events: Low-wage workers cheer, while the industries that employ them jeer, warning that their businesses will suffer.

In cities like Seattle and San Francisco, business interests have rallied against increasing the wage floor to $15, arguing that the hike will be devastating for their companies and force them to fire workers. In New York, leaders in the fast-food industry have vehemently opposed an increase of the sector's minimum wage to $15.

But on the outskirts of Detroit, where the minimum wage is $8.15, one fast-food restaurant has been voluntarily paying its workers $15 an hour for two years, and business is thriving.

Moo Cluck Moo was founded by Brian Parker, Harry Moorhouse and Jimmy Schmidt in the spring of 2013. They initially sought to pay above-average wages, and set their base pay at $12. But a few months later, when they saw the Fight for $15 — the national protest movement for a $15 minimum wage as well as stronger union rights — garnering national attention, the owners decided to bump their pay even higher. Since then, employees at their two restaurants in suburban Detroit have been paid a minimum of $15 an hour.

After they raised their workers' wages, Moo Cluck Moo's business didn't go south. The company didn't lay off workers, make their burgers outrageously expensive or find themselves unable to manage costs. Instead, since the increase, the business has grown steadily while keeping employee turnover low. They're turning a profit and expect to open up new locations as early as next year.

The story: The owners of Moo Cluck Moo paid their first employees $12 an hour out of a sense of fairness and to attract employees who would feel invested in the company.

"At the time, we felt it was the right thing to do," co-founder Parker told Mic. "We thought, we don't have to pull every penny of profit out of the till — we can spread the wealth, and share it with the team."

The owners felt the high wage was justified because of the high expectations they have for their employees. At Moo Cluck Moo, all workers are trained to do everything, from preparation to cooking to working the cash register. The skill required to pull it all together is unique for a fast-food restaurant that's expected to whip up meals in minutes. From the gluten-free hamburger buns to the aioli, all ingredients are fresh and made in-house. Parker says the work that goes into crafting high-quality, quickly made healthy food is challenging, and the pay should reflect that.

"If food is so important to us — if it's the most important thing for our survival — then why would we allow ourselves to go into a place where it's being prepared and served by the lowest rung on the ladder, in terms of pay scale?" Parker said.

The Detroit metropolitan area is still reeling from deindustrialization, with one of the worst unemployment rates in the country. That slack in the labor market puts a downward pressure on wages, since desperate workers are not in a position to bargain for higher pay. Employers tend to take advantage of this.

But Parker and his co-founders determined their compensation based on their attitude on the importance of taking both food and workers seriously. When they saw fast-food workers going on strike and protesting for a $15 minimum wage in 2013, they decided that it wouldn't be too much of a stretch to match that. About half a year after launch, they shifted their base pay to $15 an hour.

The wage hike didn't force them to lay off workers or increase menu prices. Instead, Parker says that he and his employees have relentlessly focused their attention on maximizing efficiency in everything from food preparation to the way orders are processed. Shaving seconds off the time it takes to make food or tweaking the size of meals to match patterns in customer consumption helps control costs. While their focus on natural food makes the shelf lives of their ingredients far shorter than those of their competitors, it also decreases cooking time.

What it's like for the workers: Ahmed El-Masry, 27, who began working for Moo Cluck Moo when it opened and has worked his way up to become a manager, says the $15 pay tangibly increased his quality of life. Despite having worked for the food industry for years, El-Masry told Mic Moo Cluck Moo's pay increase outpaced his previous income.

"It was much easier to pay my bills," El-Masry said. "And it made it a lot easier to make my girlfriend to nice places, as well as go out with my family."

For some employees, the higher wage has allowed them to think of the job as a pathway to career rather than a temporary way to pay the bills. Maurice Chapman, who has been with the company since the spring of 2014, says the $15 wage floor means he doesn't need to juggle multiple sources of income for the first time since he began working in the food industry.

"On this wage, you can rely on just one paycheck," Chapman told Mic. "I don't have to get a second job."

What it means: Moo Cluck Moo's success at turning a profit while paying high wages might puzzle some of its competitors, but it's not exactly a miracle. There's a great deal of research that shows that increasing pay lowers turnover and boosts productivity and worker satisfaction. That means that higher labor costs are offset by the ability to attract, train and retain higher quality workers, as well as devote fewer resources to training new hires.

It all works out so that Moo Cluck Moo can afford to charge customers reasonable prices for their meals. Their quarter-pound Moo Burger costs $4.79. A Quarter Pounder from a local McDonald's is $3.99 — just $0.80 cheaper.

Moo Cluck Moo is doing well enough that they're talking to investors and looking to expand to new locations in the coming year. Parker says that one thing is mandatory for the new restaurants, wherever they may open: They must pay their workers $15 an hour.