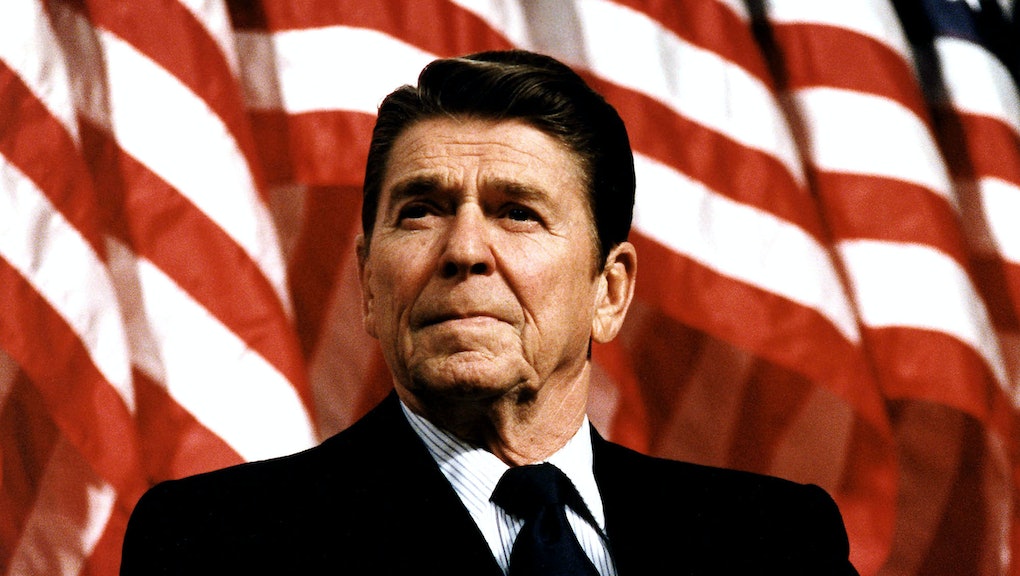 Why Ronald Reagan Would Never Win the 2016 Republican Primary

Nearly a quarter century after the end of his presidency, Ronald Reagan remains an object of singular obsession for the Republican Party: a figure to be heralded, honored and venerated as the purest incarnation of the party's most cherished conservative ideals.

Whether it's a question of tax increases, foreign policy or campaign tactics, members of the Republican Party pass every issue through the filter of WWRD: "What Would Reagan Do?" Reagan's legacy binds the party's disparate factions together — the big business conservatives like Donald Trump, the social conservatives like former Arkansas Gov. Mike Huckabee, the anti-government conservatives like Kentucky Sen. Rand Paul.

Consequently, Reagan has been name-checked by contenders for the 2016 Republican nomination at nearly every campaign rally, candidate announcement and anti-Trump jeremiad as a means of conveying conservative bona fides, a level of stardom Reagan never managed to attain during his Hollywood years. The devotion has even extended to wardrobe choices. "Let me show you something," former Florida Gov. Jeb Bush told a crowd of South Florida congressional leaders on Saturday, unbuttoning his shirt to reveal a vintage "Reagan-Bush '84" T-shirt underneath. "That's the party I believe in."

Reagan's apotheosis will culminate at the second Republican presidential debate on Wednesday. Eleven candidates will gather at the Ronald Reagan Presidential Library in Simi Valley, California, debating in front of Reagan's decommissioned Air Force One and meeting with the press a stone's throw from the president's gravesite.

The looming presence of the most popular Republican president since Lincoln will put each of the candidates on the spot. But in the rush to deem themselves worthy of Reagan's legacy, many candidates — and the Republican Party as a whole — have ignored the full portrait of Reagan's political beliefs and actions as president. Based on the policy decisions he made over the course of his political career, if Reagan were running today, he would find himself vying for the nomination of a party he largely wouldn't recognize.

The national debt skyrocketed under Reagan.

At the time Reagan took office, the national debt he once called "out of control" in front of a joint session of Congress stood at roughly $908 billion. Eight years of "Reaganomics" later, the national debt had ballooned to $2.6 trillion — nearly three times the size that Reagan inherited from Jimmy Carter. In two terms, Reagan accumulated more debt than the previous seven presidents had racked up over nearly four decades.

This chart from the Washington Post shows just how much debt Reagan racked up in percentage terms compared to other presidents:

He did pay for some of those spending increases — with multiple tax increases.

In 2011, debt-minded Republican candidates were asked if there were any ratio of spending cuts to tax increases that they would be willing to accept. The answer: no.

It's a deal that Reagan wouldn't have even thought twice about. Reagan raised taxes in exchange for spending cuts at least five times during his presidency, including when unemployment was creeping close to 11%. In fact, tax historian Joseph Thorndike said that two bills passed in 1982 and 1984 "constituted the biggest tax increase ever enacted during peacetime."

Reagan instituted the widest amnesty for undocumented immigrants in history.

Upon signing the Immigration Reform and Control Act of 1986, Reagan made the biggest legislative move to address the issue of undocumented immigrants in American history.

The bill was marketed as a crackdown on illegal immigration: It became illegal for American corporations to knowingly employ undocumented immigrants and required that they establish whether employees were authorized to work in the U.S. But the bill also made any immigrant who'd entered the country before 1982 eligible for amnesty — a word not usually associated with the father of modern conservatism. In effect, Reagan granted the ability to apply for amnesty to 3 million undocumented immigrants then residing in the country. Roughly 2.7 million ended up receiving it.

He liberalized abortion law in California to expand access to hundreds of thousands of women.

Reagan's signature on the Therapeutic Abortion Act as California governor in 1967 widened access to the procedure from "life-of-the-mother" exceptions to include victims of rape or incest, as well as occasions where pregnancy "would gravely impair the physical or mental health of the mother." The number of legal abortions in the state rose from 518 in 1967 to an annual average of more than 100,000 during Reagan's two terms — "more abortions than in any U.S. state prior to the advent of Roe v. Wade," as the National Review notes. Reagan's support for the bill is still controversial in Republican circles nearly five decades later.

Although Reagan later become a staunch opponent of abortion, calling it "a wound in our national conscience," his apparent conversion on the issue came too late to make much of a difference to anti-abortion advocates, who look on the episode in anger even half a century later.

Reagan supported one of the last major attempts at federal gun-control legislation.

When Reagan's press secretary, James Brady, was paralyzed in the 1981 assassination attempt on the president, he became the face of a movement determined to limit access to guns and ammunition by people with backgrounds of criminal or mental health problems.

The Brady Campaign to Prevent Gun Violence subsequently lobbied for restrictions on access to handguns and assault weapons, culminating in the passage of the Brady Handgun Violence Prevention Act, also known as the Brady bill.

Although Reagan was no longer president at the time of the bill's passage, the lifelong gun enthusiast came out forcefully in favor of tougher restrictions on access to firearms. "With the right to bear arms comes a great responsibility to use caution and common sense on handgun purchases," Reagan told a gathering at an event marking the 10th anniversary of the attempt on his life. "And it's just plain common sense that there be a waiting period to allow local law-enforcement officials to conduct background checks on those who wish to purchase handguns."

Reagan would never be able to pass muster in a 2016 Republican election. The Gipper's shadow falls long and dark on the field of candidates who wish to carry his torch, but the inability of Republicans to differentiate Reagan the Man from Reagan the Icon means that they remember about the great communicator what they wish to remember, and nothing more.

Reagan's moderate, even progressive stances on fiscal issues of his day don't make him any less of a Republican — they just speak to his willingness to depart from the GOP's orthodoxy in exchange for functional governance, a principle that certain members of the Republican primary field in 2015 have clearly abandoned. In other instances, Reagan's history of supporting more moderate social policy on abortion, immigration and gun control don't portray betrayal of bedrock conservative principles so much as they indicate how far right the Republican Party has moved in social issues since the mid-1980s.

As president, the former registered Democrat was fond of saying that he didn't leave the Democratic Party — the Democratic Party left him. But if the far-right positions and rigid ideological orthodoxy about to be espoused by his would-be successors in his presidential library indicate anything, it's that Reagan never left the Republican Party — but the Republican Party is leaving Reagan.