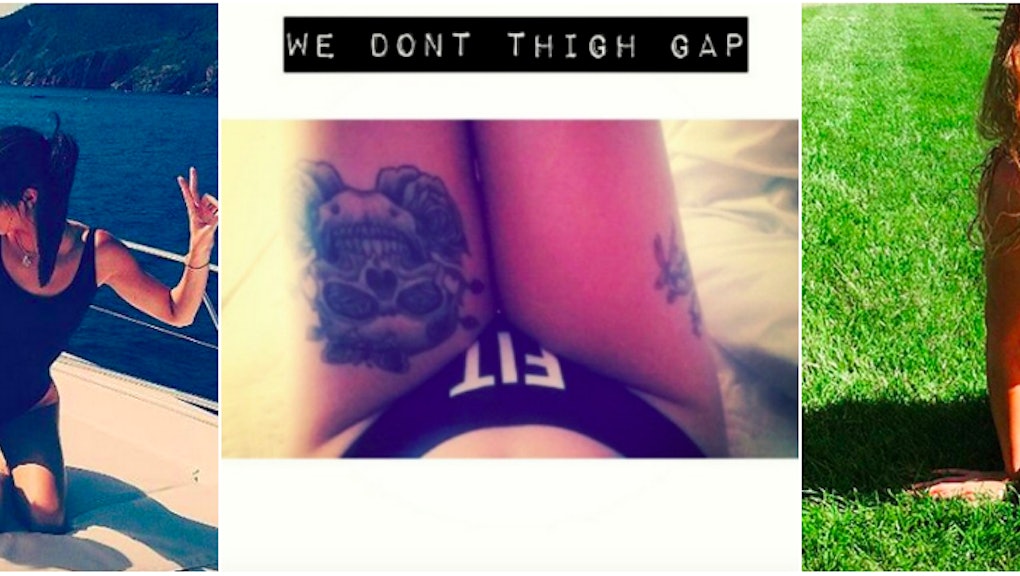 Remember the thigh gap trend, in which women posted photos of the space between their thighs as a way of boasting they were so thin that their legs didn't even touch? While the thigh gap trend was obviously problematic AF, it looks like social media trendsetters have made some progress over the past few years, as the latest thigh-related body craze is just a bit more body-positive: the #thighbrow.

The term refers to the small roll of skin that forms above a thigh when a woman sits or kneels, producing the appearance of a thigh "eyebrow".

Like any social media trend these days, there are Kardashians involved: Thighbrows have been proudly sported by Khloe Kardashian and Kylie and Kendall Jenner, as seen in the first two above photos. But the reality stars aren't the only ones embracing the trend, as Queen Beyoncé (far right) has also been spotted getting her thighbrow on.

Rihanna is also all about that thighbrow life.

The trend has prompted a number of non-celebrity social media users to celebrate their own thigh dimples. The resulting photos are a giant "fuck you!" to the tyranny of the thigh gap.

"Finally a body craze for #thickthighs!" reads one caption. Others are accompanied by body-positive hashtags like #NoThighGap and #ThickWomen.

It's easy to see why the thighbrow trend has gained so much ground. While the thigh gap was all about aspiring to an unrealistic (not to mention dangerous) body standard, the #thighbrow hashtag doesn't just embrace the dimples, rolls and imperfections of the female body — it also celebrates them.

That said, it's worth nothing that the thighbrow trend was initially popularized by Kardashian and both Jenners, women who are thin, privileged and conventionally attractive, so it's not like they're doing anything truly revolutionary for body positivity. But it is nice to see women celebrating elements of their physiques that they would otherwise try to hide — and hopefully it'll end the reign of never-touching legs once and for all.