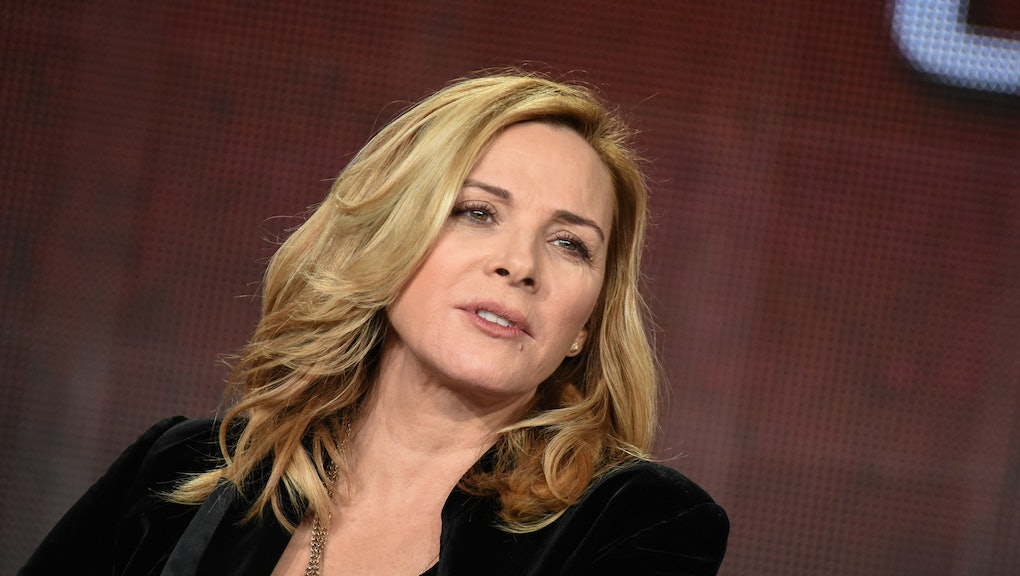 Much like her Sex and the City counterpart Samantha Jones, 59-year-old Kim Cattrall has never had kids. But contrary to what many pundits would tell you, that doesn't mean she considers herself any less of a woman — or for that matter, any less of a mother.

In an interview about life after 50 with BBC 4, Cattrall noted that just because a woman's uterus hasn't played host to a fetus doesn't mean that she can't be a parent. In fact, she considers herself just as much a mother as any woman who has had a child biologically.

"I am a parent," Cattrall said on the series Woman's Hour. "I have young actors and actresses that I mentor. I have nieces and nephews that I'm very close to. I think the thing I find questionable about being childless or child-free is: 'Are you really?'"

"There is a way to become a mother in this day and age that doesn't include your name on the child's birth certificate," she continued. "You can express that maternal side of you very, very clearly, very strongly. It feels very satisfying."

Redefining womanhood: Cattrall is far from the first woman to be judged and scrutinized for choosing not to have kids. Celebrities like Jennifer Aniston and Sarah Silverman have also gone on record skewering the expectation that women have children — and our utter befuddlement when, for whatever reason, they fail to live up to that expectation.

"There's all sorts of reasons why children aren't in people's lives, and no one has the right to assume," Aniston told Allure in 2014. "It's quite rude, insulting and ignorant."

The reasons why women would opt not to have children are hugely varied, and statistics show that more and more young people are delaying or altogether opting out of parenthood. Yet even though being "childless" or "child-free" is now something of an identity in itself, our culture still judges women who choose not to go down that path, deeming them frigid or fundamentally "selfish."  But as Cattrall rightly points out, women who don't have biological children can be just as nurturing and generous as women who do.

"I didn't change nappies, which is OK with me, but I did help my niece get through medical school," she told the BBC. "Those are very motherly things to do, very maternal things to do, very nurturing things to do. So I feel I am a mother of sorts. I am not completely child-free. Because I care about the next generation ... and that is part of what being a parent is."

You tell 'em, Sam. And if anyone dares to judge you for your life choices, you know exactly what to say to them: