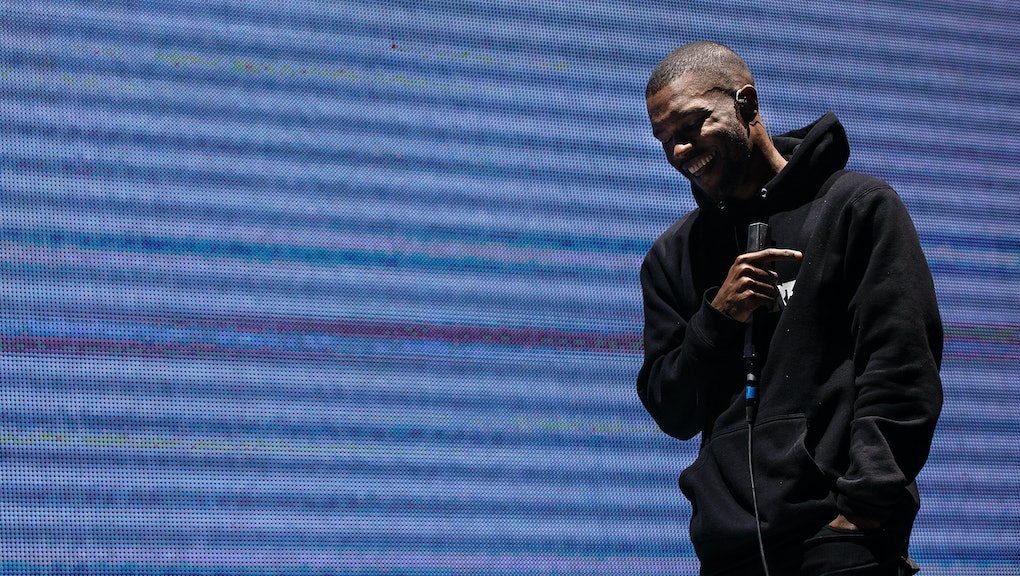 July 2015 was the longest July Frank Ocean fans ever experienced. After nearly three years without any new music from R&B's premiere man of mystery, July was supposed to be the month that broke the silence. Ocean basically announced as much on his Tumblr. Yet the month's 31 days came and went. Then August's did the same.

For fans, today is July 77th, and they're still pleading for new music.

Rumors are starting to swirl that the album has been pushed to 2016. That would be a minor tragedy, but one that fans would survive. This year has already been an incredible one for R&B innovation. In scouring the internet for leaks and other Ocean-related news, many fans have likely missed some striking releases. The music industry doesn't need Ocean to make 2015 a groundbreaking year. Here are seven releases that have already changed the game.

1. Kehlani — You Should Be Here

When Kehlani's You Should Be Here dropped in April, Billboard hailed it as "the year's first great R&B album." Over the album's 14 bouncy, effects-heavy instrumentals, the young, formerly homeless songwriter scrutinized every relationship she holds dear. She urges her lovers to shape up, discusses her troubled relationship with her mother and draws deep connections with her fans.

The way she packages honesty in fresh songwriting packages earned her album praise from numerous publications. Yet she's determined not to go down as a flash in the pan. "Hard work always beats talent," Kehlani told Fader. "That's always been my thing. Girls pop up singing raw every day. But how many of those girls write their songs? How many of those girls spend this many hours in the studio? If I'm singing like they're singing, but I'm putting in work too, it's going to happen."

Listen to the full mixtape via SoundCloud here.

Miguel has lived in Ocean's shadow throughout his rise to fame. Ocean's 2012 record Channel Orange drowned out a lot of the buzz that should have accompanied Miguel's Kaleidoscope Dreams, released the same year. Yet certain critics, including Anne Powers of NPR, found it to be an all-around stronger offering.

This year, following the release of Wildheart, Miguel went out of his way to let fans know he's more than side dish to Ocean's main course. Responding to a question asked by a Sunday Times reporter about his relationship with Ocean, Miguel responded, "I wouldn't say we were friends. To be completely honest — and no disrespect to anyone — I genuinely believe that I make better music, all the way around ... It's interesting, but we'll see who's in it for the long haul. It's like a marathon, you know?"

It's a bold statement, but it hints at a fundamental truth: Miguel's Wildheart deserves to be listened to as its own creation, not as a cheap Frank Ocean alternative.

Bilal has been an institution in R&B since the Erykah Badu's and D'Angelo's neo-soul heydey in the early 2000s. His music, though continually excellent, has always flown slightly under the radar. His talents earned him several high-profile spots singing hooks on Kendrick Lamar's To Pimp a Butterfly, but it's Bilal's In Another Life, released in June, that shows just how much he has to offer.

The album has a loose and raw throwback sound, like the whole thing was recorded live in a echoey jazz hall. He also veers into political territory, seeking answers as to why our society looks the way it does, a la  Marvin Gaye's "What's Goin' On?"

"Watching the world watch people as they do what they do to people / So what did we do? / And what can we do? / And how did this happen?" Bilal sings on the album's single "Satellites." These are exactly the questions Questlove and other visionaries have been urging more musicians to ask in their music.

The mixture of hip-hop, R&B and pop Shamir alloyed on his May album, Ratchet, took the industry completely unaware. Publications talked about it as though it had completely changed the game, with the New York Times titling its profile "Pop Music Catches Up to Shamir."

The response took Shamir by surprise as well. "I don't think I'm really doing anything that's too different or forward-thinking," he told Mic in June. "I think the whole 'changing pop music' thing is just more because it's really different for people to see a queer black kid doing it."

His album is a perfect glimpse at the uncertainty and difficulties that necessarily accompany adolescence and identity struggles. His oddly high-pitched voice relates his trials and tribulations with an expected confidence and a certainty of vision. Groundbreaking or not, Shamir knows exactly the music he wants to make, and he's got all the necessary talent to bring it to life.

5. Thundercat — The Beyond / Where the Giants Roam

Yet another artist who's frequently discussed in conjunction with Ocean, Thundercat has a virtuosic, jazz-driven R&B that has continually fallen short of mainstream recognition. Experimental electronic musician and Brainfeeder label boss Flying Lotus wrote an extensive commentary about the issue following Thundercat's 2013 release Apocalypse.

"I was mad that Thundercat wasn't living it up like Frank Ocean and Miguel," Flying Lotus wrote in a tweet. "I think he deserves the universe. A man with limitless ideas and talent. It's kinda scary to witness."

Thundercat demonstrated his brilliance again on his "surprise" EP The Beyond/Where the Giants Roam. It features jazz greats Herbie Hancock and Kamasi Washington, who worked alongside Thundercat and Lamar to craft the mystical jazz vibes of To Pimp a Butterfly. It probably will not be the album that launches Thundercat into R&B aristocracy, but it still makes for an compelling and unpredictable listen.

FKA Twigs' surprise released her latest EP, M3LL155X (read: Mellissa), to relatively little fanfare in August. It came with a spine-tingling 16-minute video, providing alluring yet disconcerting visual treatments for three of the songs from the album. One listen or a watch through proves why the album went right over the heads of many audiences: It's some of the most aggressively iconoclastic R&B to ever exist.

It stretches today's trendy electronics-heavy R&B stylings to their absolute breaking points. The beats are glitchy and abrasive, and FKA Twigs' vocals drip with a haunting sensuality. "I try and make it as visceral as possible," FKA Twigs said of her artistic choices, according to Complex. "I want people to hear the sinews in the drums and the clicking sounds. I want it to feel physical, like it's in your body, because that's how I feel."

Listen to the full EP via Spotify here.

7. The Weeknd — Beauty Behind the Madness

The Weeknd's Beauty Behind the Madness, released in late August, is proving to be a massive commercial and critical success. Abel Tesfaye is really proving to be the next incarnation of Michael Jackson he seems to have been aspiring to since he covered "Dirty Diana" on his 2011 mixtape Echoes of Silence.

Beauty Behind the Madness still has all of the Weeknd's debauched, drug-addled lyricism longtime fans fiend for, polished with a slightly more poppy veneer to help introduce him to the masses. "I'm that nigga with the hair/ Singin' 'bout poppin' pills, fuckin' bitches, livin' life so trill," he explains on the album's latest single "Tell Your Friends." The hooks are extraordinarily dark and moody, but also extremely catchy, a balance most pop never even attempts to strike.

If Ocean's Boys Don't Cry does drop before the end of 2015, this will be the album he'll likely need to compete with during the year-end conversation. If it doesn't, the Weeknd will hold down the fort nicely. R&B doesn't need Ocean to be its savior. It's doing just fine without him.