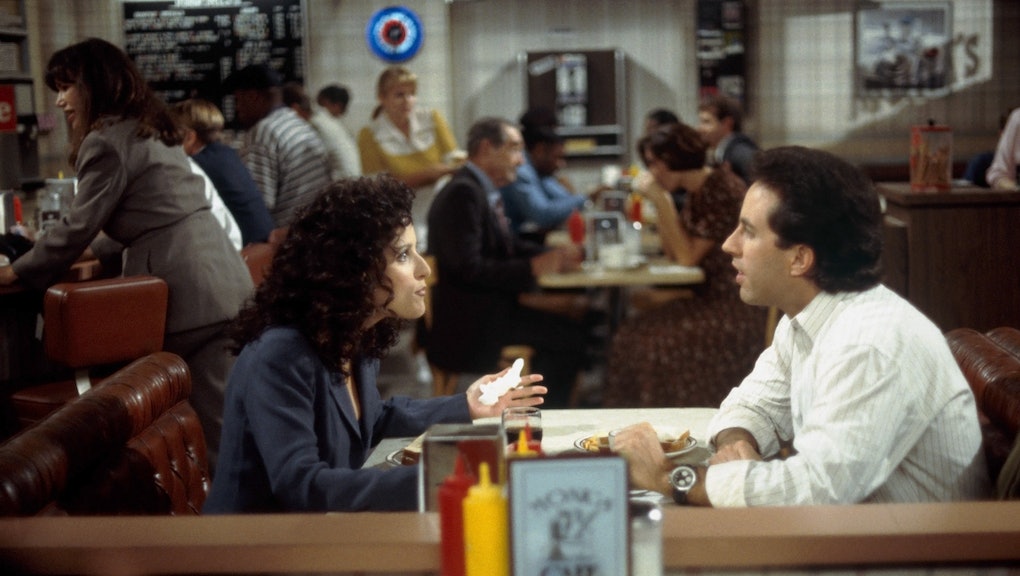 It's an age-old quandary, as well as one of the many questions that Carrie Bradshaw couldn't help but wonder about: Can you be friends with an ex?

When we asked 100 IRL humans this question, the response was mixed. Twenty-one percent of people believed the answer was "yes," 25% didn't believe it was possible and 54% believed that it depended on the nature of the breakup. A larger survey of more than 1,800 people conducted by Mic found that, in practice, only about 14% of exes were able to easily transition into friendship, due in large part to the awkwardness of the post-breakup hangout.

But what can we learn from those mysterious few who actually manage flourishing platonic friendships with their exes?

The breakup has to be fairly amicable. Carl*, a 23-year-old Brooklynite, recently called it quits with his boyfriend of eight months. A week later, the two of them were kicking it like old pals. He believes this was because the breakup itself was handled with a certain amount of maturity and levelheadedness.

"As we grew to fight more, it became clear us parting ways was the right thing to do," he told Mic. "It was as mutual as breakups get."

Carl's experience suggests that there may be a correlation between the intensity of the breakup and the likelihood that two exes will become friends later. If people break up for reasons that have to do with sheer romantic incompatibility, rather than a more traumatic reason like an infidelity, they're more likely to have a less stormy refractory period.

In fact, one study from earlier this year proved that couples who were more committed during the actual relationship were the most likely to wind up as friends.

You also need a buffer period. The phrase "time heals all wounds" is something of a cliche. But in the case of exes becoming friends after a messy breakup, it's actually kind of true.

Dominic* and Mitch*, both 26, dated for a year and a half in college before breaking up. "We both went through periods where the spark went away," Mitch told Mic. "But I think [the breakup] was mostly due to being young and wanting to explore more."

As with many college relationships, emotions ran high and things ended badly. "We were barely on speaking terms at first," Dominic said. However, after Dominic moved in with a mutual friend of Mitch's a few years later, the two became friendly again. They now hang out about once a week.

Not every couple needs a buffer period quite as long as Dominic and Mitch's but most couples need some time apart before transitioning from the sex zone to the friend zone.

Melinda*, a straight woman in her mid-20s, told Mic she has remained friends with nearly all of her exes. She believes that a six-month period of zero contact was the essential ingredient in her "100% platonic" post-breakup friendship she shares with Doug*, her most-recent ex.

"We get along well but broke up because he's not interested in long term stuff (marriage/kids/etc) at all," she told Mic, adding that they decided right off the bat to cool it for a while before reinitiating contact. "It was a bummer, but after our time apart and some palate-cleansing flings it was easy to slide into being friends." In fact, they got lunch together earlier this week.

Unfriend each other:  When Dominic and Mitch first broke up, they removed each other on Facebook right afterward.  This was probably a good idea: Research suggests that unfriending an ex is one of the best ways to speed up emotional recovery after a breakup, likely because it allows you to navigate your social media life without triggering images or updates about your ex.

Taking a social media hiatus from your ex is also a good way to ensure you two have a lot to catch up once you feel ready to try being friends again. When Dominic and Mitch reunited a few years after Facebook, they "really reconnected," Dominic told Mic. "Both literally and on Facebook."

That said, you shouldn't try to be friends with an ex unless you both feel that breaking up was a good idea. When Jemima*, 24, broke up with her boyfriend of a year and a half, Timothy*, both said they were still in love with each other. "It was incredibly painful for both of us," she said. "We still loved each other very much."

The split was amicable but not easy. "It was a very difficult decision, especially because nothing had really changed and I didn't love her any less," Timothy said.

One thing that made it easier was the fact that they agreed breaking up was the right decision for both of them at the time. That allowed them to slowly start becoming friends again, with Jemima later inviting Timothy over to have a beer and help fix her kitchen cart.

"He initiated our breakup, but I agreed with his thinking," Jemima told Mic. "We needed different things. Timothy needed to see other people... I needed more commitment, and wasn't willing to change that or try to convince him to stay with me."

In the end, the varying testimonies of these couples prove that the ability to stay friends in the aftermath of a failed relationship depends on the circumstances. Sometimes, it's possible to become friends with an ex after a breakup. Other times, a clean, never-see-each-other-again break is absolutely necessary for both parties.

With a combination of time apart, an amicable split and a brief social media vacation, couples can figure out how to make it work. If all of these pieces fall into place, a gradual transition to friendship can be exactly what both parties need to move on in a way that feels authentic to the relationship.

And in cases like Timothy and Jemima's, friendship can be a way to honor and preserve a trace of that uniquely intense human connection that can only come from a romantic relationship.

"I'm happy about [being friends]," Timothy said. "I never wanted us to become strangers."

No matter how acrimonious the breakup or how gut-wrenching the process of mending a broken heart is, most exes probably feel the same way.