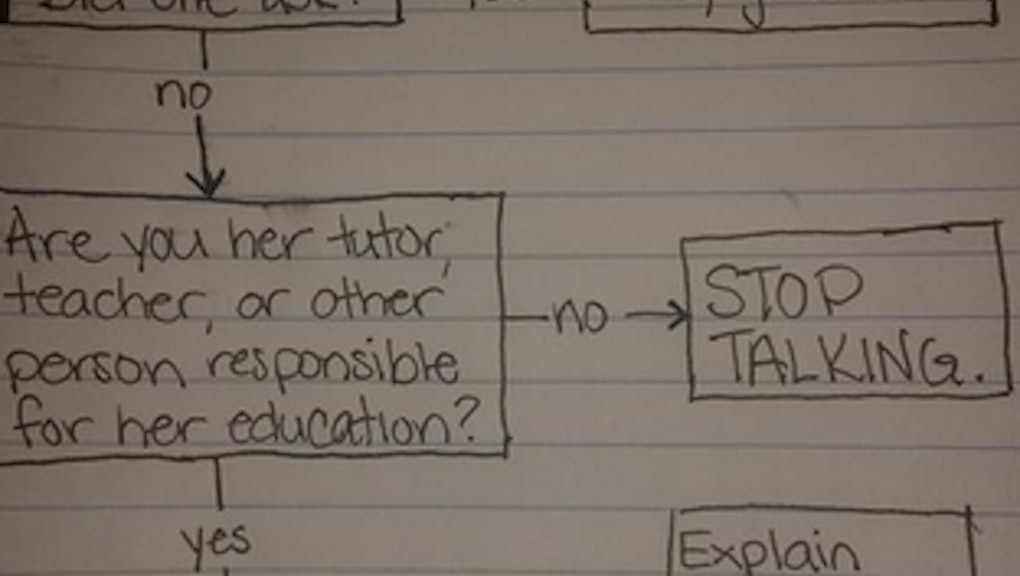 When Is It Okay to Mansplain? Check This Chart

We've all witnessed or experienced "mansplaining," or as Salon defines it, "when a man condescendingly lectures a woman on the basics of a topic about which he knows very little, under the mistaken assumption that she knows even less." The concept may have been formally exposed by writer Rebecca Solnit in 2008, but it's still alive and well seven years later. One blogger, Elle Armageddon, recently experienced firsthand.

A day after a man explained the concept of ascending and descending street numbers to her, a friend told Armageddon she also experienced an "unsolicited and uninformed explanation being foisted upon her," the writer told the Daily Dot on Monday. These experiences inspired the writer to create a flowchart she titled "Should You Explain the Thing to the Lady?"

The intent was a quick laugh, she said, but Armageddon soon had to field tweets from those who failed to see the humor. Some Twitter users, in fact, saw no irony in mansplaining the chart and implications of her choice to share it, asserting that it was unnecessary and sexist.

Users made these claims despite Armageddon's personal experience with mansplaining, the support evident in the hundreds of retweets and favorites her message received — and the fact that she doesn't even include gender in her chart or her explanation of it.

"The way it has been interpreted repeatedly to be an attack on men, or specific to men, without making any mention of men is actually really interesting to me," Armageddon told the Daily Dot.

This is certainly not the first time a woman's own personal experience has been mansplained back to her online. For example, when one Reddit user posted her post-sex FitBit results on Reddit in August, other users began to disparagingly explain the experience to her and the Reddit community.

But the persistence of individuals like Armageddon to push back on this condescending treatment is crucial. As Solnit herself explained in a 2012 update to her original essay, "Having the right to show up and speak," whether online or in war-torn nations, "are basic to survival, to dignity and to liberty."