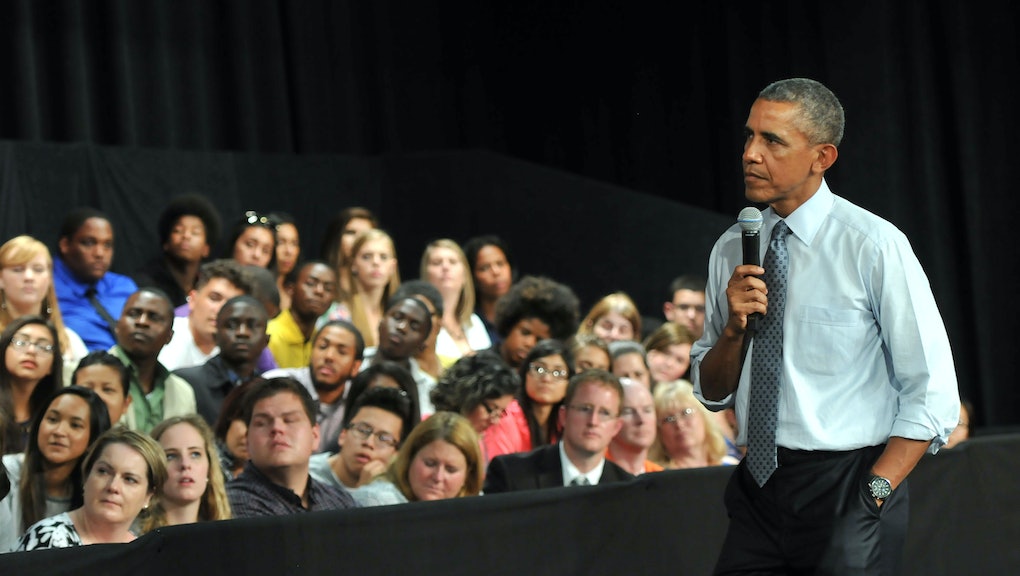 On Monday, President Barack Obama held a town hall in Des Moines, Iowa, to promote a technical adjustment to the financial aid process designed to make college more accessible. During a question-and-answer session with the audience, he delved into a heady discussion about the very meaning of college, and made his first public foray into the contentious national debate over the so-called new political correctness.

Obama's reflections on the purpose of college life, which were first flagged by Vox, were prompted by a student's question regarding Republican presidential candidate Ben Carson's idea that the government should cut off funding to colleges that demonstrate "political bias." Obama was perplexed by Carson's suggestion, saying, "I have no idea what that means, and I suspect he doesn't either." But what followed was far more interesting than a typical dismissal of a cryptic policy idea.

Presidential views: Obama explained his belief that engaging with ideas you might disagree with is a foundational element of higher education.

"The purpose of college is not just, as I said before, to transmit skills. It's also to widen your horizons, to make you a better citizen," Obama said. "The way to do that is to create a space where a lot of ideas are presented and collide, and people are having arguments, and people are testing each other's theories. And over time, people learn from each other because they're getting out of their own narrow point of view, and having a broad point of view."

The most striking part of Obama's remarks came when he shifted the conversation to a topic that has become all the rage in public debate in recent months — the view held by some liberals that there should be more regulation of speech on college campuses.

"It's not just sometimes folks who are mad that colleges are too liberal that have a problem," Obama said. "Sometimes there are folks on college campuses who are liberal, and maybe even agree with me on a bunch of issues, who sometimes aren't listening to the other side, and that's a problem too."

Obama didn't use hotly contested terms like "trigger warning" or "microaggressions," but he points to the universe of ideas that they come from as problematic.

"I've heard some college campuses where they don't want to have a guest speaker who is too conservative or they don't want to read a book if it has language that is offensive to African-Americans or somehow sends a demeaning signal towards women," Obama said. "I gotta tell you, I don't agree with that either."

The president suggested that tailoring curriculum to fit the political sensibilities of some students will result in over-sensitivity and curtail the ability of colleges to pursue free inquiry.

"I don't agree that you, when you become students at colleges, have to be coddled and protected from different points of view," he said. "I think you should be able to — anybody who comes to speak to you and you disagree with, you should have an argument with them. But you shouldn't silence them by saying, 'You can't come because I'm too sensitive to hear what you have to say.' That's not the way we learn either."

Obama's remarks should inject more energy into a debate that is in no way suffering from lack of it. From viral articles on "the coddling of the American mind" to concerns that trigger warnings could be driven by an impulse to censor ideas, the idea has come under heavy fire in recent months. As the president's remarks make clear, there's no shortage of opinions on how academia is to deal with the age-old debate on how to make speech free, fair and safe in a democracy.

You can watch Obama's full riff on political correctness here: