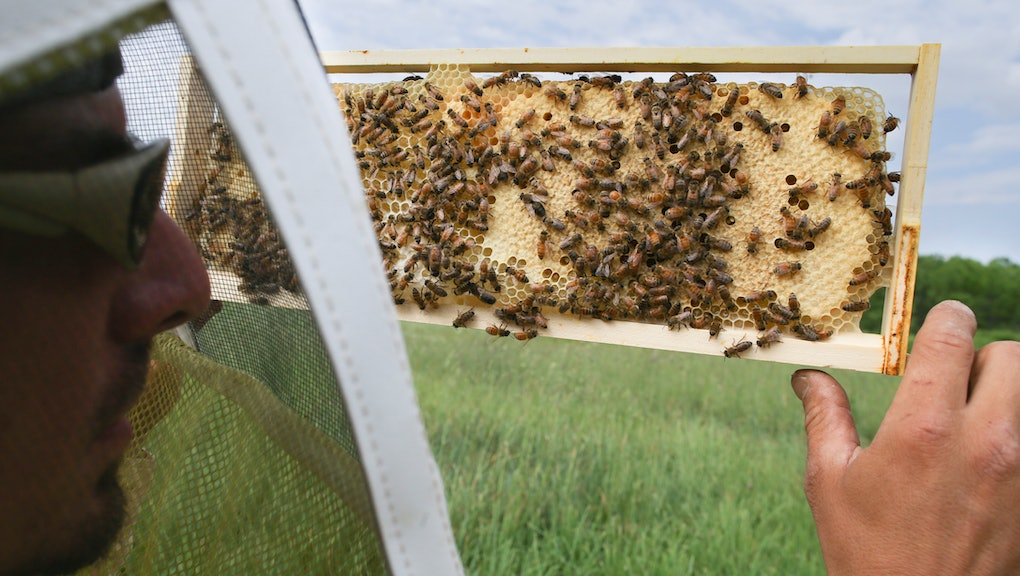 The Man Who Let Honeybees Sting His Penis, and Other Winners of the 2015 Ig Nobel Prizes

Every year, the Nobel Prizes celebrate the best of human achievements. Albert Einstein received one in 1921 for his work in theoretical physics. Martin Luther King Jr. took the prize for peace in 1964, while James Watson and Francis Crick were recognized in 1962 for their discovery of the DNA double helix.

Awarded by the satirical Annals of Improbable Research, the Ig Nobels highlight the quirkiest and most bizarre academic inquiries and achievements of the previous year. "The Ig Nobel Prizes honor achievements that make people laugh, and then think," reads Improbable Research's main page, "The prizes are intended to celebrate the unusual, honor the imaginative — and spur people's interest in science, medicine and technology."

But who are the prestigious honorees? Mic spoke to some of them.

The Bee Man: "I was stung in the testicles, and it didn't hurt nearly as much as I thought it would," Michael Smith, a Ph.D. student at Cornell University with a specialization in beekeeping, told Mic. Smith was one of the recipients of the Ig Nobel for physiology and entomology. His work focused on the painfulness of honeybee stings. "While this may seem like torture, it's not as torturous as it may sound," he said.

In full Jekyll and Hyde style, the grad student allowed bees to sting him on 25 selected points of his body on three occasions, resulting in at least 75 official stings, with countless others received in the process. In a nod to Justin O. Schmidt, the inventor of the Schmidt sting pain index and the other recipient of the 2016 physiology and entomology Ig Nobel, Smith ranked the painfulness of stings from least to most painful on a scale of one to 10.

The results found stings to the skull, middle toe tip and upper arm were the least painful each scoring a 2.3, while "the three most painful locations were the nostril, upper lip and penis shaft (9.0, 8.7 and 7.3, respectively),"

The "Huh?" Team: "It's a bit of a dubious honor," Mark Dingemanse, a language scientist at the Max Planck Institute for Psycholinguistics, told Mic. Dingemanse, along with fellow researchers Francisco Torreira and Nick J. Enfield, were the recipients of the Ig Nobel's prize for literature for discovering the universality of the word "huh?" or some close equivalent.

"What we claim is that based on the 31 spoken languages worldwide that we have reliable solid evidence for, in none of those languages did we find an exception," said Dingemanse, who added the expression seems to have been part of a what he called a "cultural evolution" to avoid awkward silences.

The discovery was accidental, he said, and part of a larger study focusing on how people solve communications problems around the world. "It wasn't the idea to look at this word particularly," Dingemanse said. "We discovered it happened to be a universal word."

He estimated their work could one day be applicable to training robots to understand language more fluently or to improve the quality of language teaching. "Nobody expected to find a universal word and nobody expected it to be 'huh,'" he said. "My hope is that people will learn about the larger work."

Dingemanse and the other honorees will have the opportunity to expand on their research in greater depth at public lectures they will give at the Massachusetts Institute of Technology on Saturday.

Below are the night's other winners:

Achievement: "For inventing a chemical recipe to partially un-boil an egg"

Achievement: "For testing the biological principle that nearly all mammals empty their bladders in about 21 seconds (plus or minus 13 seconds)"

Achievement: "For discovering that many business leaders developed a fondness for risk-taking in childhood, when they experienced natural disasters (such as earthquakes, volcanic eruptions, tsunamis and wildfires) that — for them — had no dire personal consequences"

Achievement: "For offering to pay policemen extra cash if the policemen refuse to take bribes"

Achievement: "For experiments to study the biomedical benefits or biomedical consequences of intense kissing (and other intimate, interpersonal activities)"

Achievement: "For trying to use mathematical techniques to determine whether and how Moulay Ismael the Bloodthirsty, the Sharifian Emperor of Morocco, managed, during the years from 1697 through 1727, to father 888 children"

Achievement: "For observing that when you attach a weighted stick to the rear end of a chicken, the chicken then walks in a manner similar to that in which dinosaurs are thought to have walked"

Achievement: "For determining that acute appendicitis can be accurately diagnosed by the amount of pain evident when the patient is driven over speed bumps"