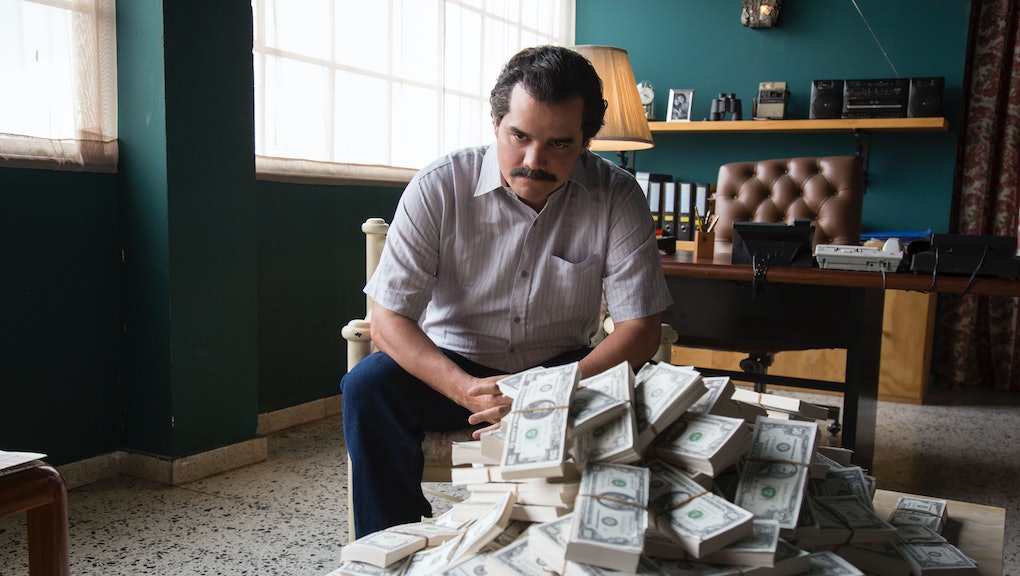 With recent releases Narcos and Club de Cuervos, Netflix is officially on the hunt for more Hispanic viewers. That's the easiest way of framing the streaming service's latest original programming offerings, and it falls in line with its stated goals. In a January letter to shareholders, the company put it bluntly, saying, "It is advantageous for Netflix to become global in many ways," and that "being able to source great stories from around the world and deliver them to the world" is high on its priority list.

But in its attempt to craft global content, is Netflix actually alienating the very viewers its shows are designed to court? While Netflix's original programming is clearly aiming for a global audience, issues in casting, production, and execution show a rather glaring indifference to the needs and wants of a non-Anglo audience. Narcos is but the latest example of a systemic problem in how Netflix is "sourcing and delivering" great stories from around the world.

Thinking globally has been at the heart of Netflix original programming for quite some time. House of Cards boasts world-famous names David Fincher and Kevin Spacey. Orange Is the New Black has required Netflix subscribers to follow stories about Haitian immigrants, Russian mobsters and Latino bank robbers with subtitles in French, Russian and Spanish. The epic Marco Polo features an international cast and crew, while Andy and Lana Wachowski's Sense8 shuttles from Nairobi to Seoul to San Francisco to Mexico City — not just between scenes but, between shots.

Called "the next great Netflix show," "the portrayal of the drug war we needed," "the kind of binge-worthy TV addiction that Netflix was born to import" and the "critically-acclaimed international breakthrough for the streaming site that Marco Polo wasn't," Narcos has been hailed as precisely the type of internationally flavored show the streaming service will need as it continues to expand globally. A recent estimate notes that Netflix could be in as many as 200 countries by 2017.

What all of this obscures, however, is the way the show is also diagnostic of Netflix's larger blind spots when it comes to producing and distributing this so-called "global content."

Narcos was created and written by three American screenwriters better known for their work on popular procedurals (creator Chris Brancato wrote for Law and Order: SVU and served as an executive producer for Law and Order: Criminal Intent) and summer blockbusters (Carlo Bernard and Doug Miro were behind 2010's Prince of Persia and The Sorcerer's Apprentice). In fact, while Padilha has been at the center of discussions of the show — it clearly owes its appeal to his directorial vision — Narcos frames and packages a story about Colombia for a "global market" that remains, in practice, stubbornly American and all but wholly English-speaking.

Nowhere is this more glaring than in Moura's casting. A longtime Padilha collaborator, Moura only began learning Spanish six months before Narcos began shooting. Many Hispanic viewers have taken to Reddit threads, comment sections and Twitter to voice their distaste for his accent. It's gotten to the point where Moura himself had to weigh in on the issue, noting that of course his accent wouldn't be as good as that of a native speaker.

While one can wave away the fact that Narcos uses an American point of view to narrate the story (Holbrook's Goodfellas-inspired voice-over dominates throughout), it's harder to shake the fact that it purposefully cast someone who could barely speak the language — unless one factors in the way Moura's performance would be received by Netflix's audience. English speakers would see it filtered through subtitles. To them, Moura's lack of Spanish fluency would be a negligible, hairsplitting issue at best.

The foreign market audience, on the other hand, trained and resigned to seeing non-American characters speaking in laughably bad accents that betray the very fluency they're portraying, would just see it as an understandable hiccup. It's business as usual, even within Netflix's extensive roster.

Thus, Orange is the New Black's Red can get away with Kate Mulgrew's near-flawless Russian-accented English even though her actual Russian is merely passable. It doesn't detract from her nuanced performance, but it does diminish the verisimilitude Jenji Kohan's prison drama prides itself on.

This is acceptable, if unfortunate, in small roles (like Elena Cardenas in Daredevil), but it becomes a real problem when it's your protagonist. Not that that has stopped Netflix in the past; Marco Polo gets away with Richelmy's garbled English (like Moura, he learned English for the role). Hearing a famed, historical European figure speaking in an accented English has become all but commonplace for English-speaking audiences. Hollywood has trained audiences to recognize his thick accent as marking Marco Polo's Italian-ness.

Sense8 at least had the foresight to avoid these pesky issues. Indeed, despite casting a surprisingly international cast, the show has all of its leads speak English whether their characters should be speaking Spanish, Hindi, Korean or German.

Netflix's first Spanish-language comedy, Club de Cuervos, shows a tad more promise. Produced by Gary Alazraki (whose film Nosotros los Nobles broke all Mexican box-office records upon its premiere in 2013), this soccer comedy at least seems to have a Hispanic audience in mind. On the other hand, all of its episode titles remain hilariously dependent on English puns.

Taken separately, these observations seem like nitpicking. Should we expect Moura to speak exactly like Escobar, whose "paisa" accent is as idiosyncratic as it is unmistakable? Must we really expect authenticity from shows like Sense8, which brazenly demands suspension of disbelief? Is it that alarming if minor foreign characters betray themselves by clearly lacking mastery of a foreign tongue?

Taken together, though, they paint a rather bleak picture of Netflix's commitment to quality television that can cater to their growing global market while also appeasing and increasing their North-American core demographic. These examples show a vision of a "global" audience that is always already an English-speaking one.