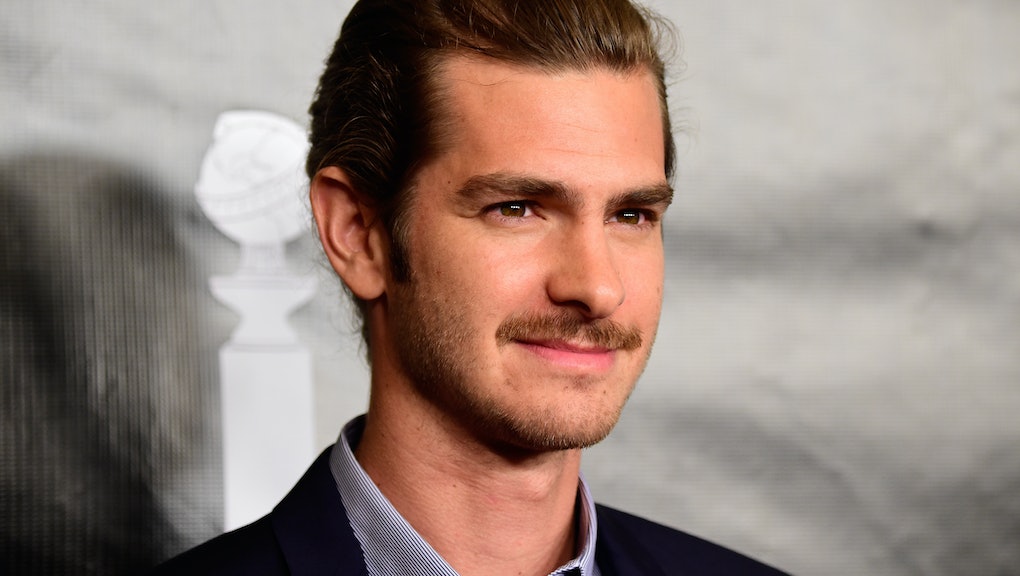 Andrew Garfield doesn't think actors should do interviews. It's easy to understand why. The shaggy former Spider-Man has a tendency to say very quotable things that turn into headlines. Why can't Peter Parker be gay? Why can't he be pansexual? Why did making those Spider-Man movies feel "like a prison"?

It's the last of those soundbites that's making the rounds when he sits down for coffee with Mic on Labor Day. His long hair is tied into a bun, his face not quite as scruffy as in recent press appearances. He looks like the middle ground between Peter Parker and his rugged blue collar worker character, Dennis Nash, from his upcoming release 99 Homes. He has only the nicest things to say about The Amazing Spider-Man series.

"They just meant so much to me, and still do and always will," he says now about the two superhero films. "I'm sad that they're over ... It was just a dream come true to be able to play that character."

Instead of Spidey, Garfield is fixated on another target today: Donald Trump. The real estate tycoon is way up in the polls, with no signs of slowing down heading into 2016. Garfield is terrified.

"Aren't you?" he says, more than a hint of panic pulsing in his voice.

"Doesn't it feel like it's a distinct possibility, the fact that he's the number one Republican candidate right now?" Garfield says. "It says a lot about the culture of fear we're in. Like, 'I've got to keep what's mine, keep all the foreigners out.' Like there's not enough to go around. We're in one of the richest countries on earth, and there's abundance all around us. The abundance just happens to be in Donald Trump's safe."

For whatever reason, Garfield reads as having come from money. It might a reflection of his performance as baby billionaire Eduardo Saverin in The Social Network, or how casually he mentions a secret burger spot in New York's Le Parker Meridien hotel that rivals Los Angeles' In-N-Out Burger. His English accent also gives him a posh veneer.

The truth is far less chic. Garfield is the son of an English mother and American father, who raised him in a small Surrey town called Epsom. His parents ran an interior design company. Even after their son got famous, they remain the type of adorably dorky parents who will show off pictures of their child in a Spider-Man Halloween costume.

In school, Garfield was a regular child of suburbia. He was a gymnast and swimmer, with a dad for a coach in the latter. These working-class roots attract the former Starbucks barista to similar types of roles now, noting that with the exception of Saverin, every film character he's played has been a blue-collar worker.

"I'm much more interested in the struggle of the working class, because that's my background," he said. "That's my family."

99 Homes is no exception. The Ramin Bahrani film, which earned critical plaudits after its 2014 premiere at the Venice Film Festival, follows down-and-out contractor Dennis Nash as he and his family are evicted from their home thanks to the real-world housing bubble and subsequent recession. In a deal with the devil, Nash goes to work for the man who evicted them (Michael Shannon) in an attempt to get their house back.

The movie is harrowing, largely thanks to its extremely discomforting cinematic style. Brutal scenes like Nash's eviction are played in long takes, skipping not one excruciating detail. It's fitting for a story about having your home invaded and taken.

"It was one of the most painful things I've ever read in any script," Garfield said of first experiencing that particular scene. "This tearing from the womb of home; it felt so personal. Even though I've never experienced it, I do know the feeling of exile. ... I think every human being, especially in this western, capitalist, hierarchal, fucked-up system has the experience of not being welcome."

"Some big change has to happen," he continues, referencing movements across the country responding to inequality. "It's not going to happen under Donald Trump."

There he goes again, gracefully switching talking points. It's like verbal ballet, if the lead dancer were a lanky British-American with a propensity for speaking his mind.

That openness has kept him in the ranks of Hollywood's A-list even when he wasn't hugely present in cinemas. True, he had the two Amazing Spider-Man movies, but that was it. 99 Homes is his first non-Spider-Man movie since 2010. This puts him in an interesting position: While Americans know and love Andrew Garfield the Celebrity, most famous as part of a power couple with Emma Stone, they're less familiar with him as Andrew Garfield the Actor. It was only five years ago he was the "little-known" Brit chosen to play Peter Parker, after all. Other than his Tony-nominated turn in Death of a Salesman on Broadway, it's been all Peter, all the time.

The abstinence from other films while donning the blue-and-red suit wasn't intentional, though. "I was open to doing other things, but other things didn't come up," he said. "They didn't call to me in the same way. ... And those Spider-Man movies take up a lot of time."

Speaking of Spider-Man, what about that "like a prison" quote? His graciousness about the film series now is charming but contradictory. Asked about the soundbite, he smiles just tightly enough to betray annoyance. This is why he hates interviews.

The next few years will be make-or-break for Garfield. Without a superhero franchise to fall back on to keep him busy, he's placing his chips on prestige projects. His next films are with Martin Scorsese and Mel Gibson, but that's all on his public agenda for now.

"I think the Andrew Garfield I want people to meet is all of me," he says about his informal reintroduction to film. "I want to meet all of me, to bring all of myself to the table — whether it's to an interview, a film, a play, whatever."

Industry eyes will be watching Garfield's next choices closely. His next test will be whether he can attract attention for what he says on screen versus off of it — something he's yet to do on his own. If his films are half as fascinating as he is, however, he'll be fine; that is, unless he's forced to flee a Trump-controlled U.S. first.