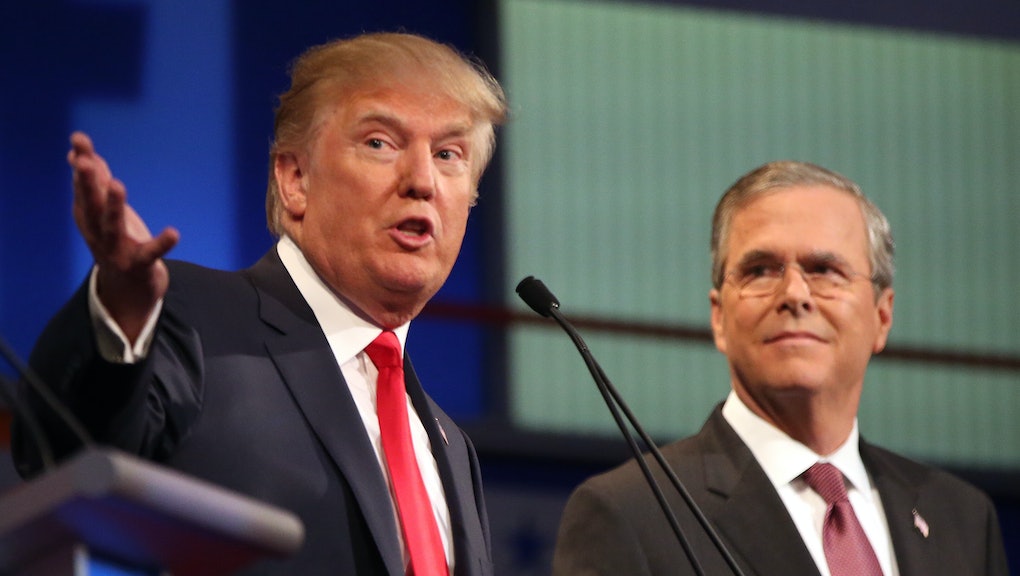 The 7 Biggest Questions Heading Into the Second Republican Debate

The Republican presidential candidates return to the debate stage Wednesday night in a new state, with new moderators and a new contestant in their ranks. But this second gathering of the primary season will have one thing very much in common with the first — Donald Trump, leading in the polls and dominating the attention of his opponents, remains the central attraction.

The hosting duties this time fall to Jake Tapper and Dana Bash of CNN, and conservative talk radio host Hugh Hewitt. Former Hewlett Packard CEO Carly Fiorina, who has climbed in the polls on the strength of a sharp performance during the "happy hour" debate Aug. 6 in Cleveland, has been awarded a prime-time podium at the Ronald Reagan Presidential Library in Simi Valley, California.

That this summer of the political outsider comes to a close at the symbolic home of the Republican establishment's most revered figure should add some extra punch to the proceedings, as the candidates, including popular outsiders like Ben Carson, scramble to cast themselves as Reagan's long-awaited heir.

Here are seven storylines to watch as they jockey for the crown:

1. Can Jeb Bush land a punch on Trump?

The former Florida governor and early frontrunner has been the highest-profile victim of the Trump insurgency, dropping into the single digits in most national polling as the billionaire routinely eats up about a third of the support. Trump appears to take special pleasure in poking at the low-key Bush, repeatedly dismissing him as a "low energy person."

After strategically ignoring or brushing off Trump's histrionics in the early part of the summer, Bush has begun to respond more pointedly. After Trump criticized him for speaking in Spanish for a small portion of a recent campaign stop in Florida, Bush bit back — en Español.

"He attacks me every day," Bush said, according to a Washington Post translation. "He attacks me every day with barbarities. They're not true. What we did today was to put out in his words to show that he's not conservative... He doesn't have a record, because he hasn't been a person who has served like me, who served for eight years as governor. He's not a conservative."

Days later during a stop in New Hampshire, Bush promised a group of veterans he had a warring spirit: "When [Trump] attacks me personally or disparages my family, you're damn right I'm going to fight back."

Bush will have at least a few chances to deliver on that promise Wednesday night.

2. Can Scott Walker do something to save his campaign?

A few months back, the union-bashing conservative with tea party credentials and the Koch brothers' cash seemed like a top contender for the nomination. The conventional wisdom put him at the head of the line, right alongside Bush and a few notches ahead of even serious right-wingers like Sen. Ted Cruz (Texas). In the spring, he topped most polls in Iowa, where his lead often reached double-digits, and showed signs of contending in New Hampshire.

Fast forward to September, and Walker's campaign is in shambles. A recent Politico story about his struggles reads like a post-mortem, with one top Iowa operative saying Walker "clearly wasn't ready because he was on three different sides of two-sided issues on a couple of different occasions." Indeed, Walker's tendency to adjust and re-adjust and then tweak his positions on hot-button issues like immigration reform have cost him dearly, especially with Trump standing by to call him out.

Where he once led by a seemingly insurmountable margin, Walker now trails Trump by a staggering 24 points, according to the most recent Quinnipiac poll, with the support of only 3% of Hawkeye State Republicans.

The good news for Walker: Time is on his side and there is money to burn. The Reagan superfan couldn't have picked a better place to begin the process.

3. Is there anything Trump can say that would hurt his poll numbers?

It has become increasingly clear there is no one thing Trump could do or say that would put an immediate and meaningful dent into his base of support. He has repeatedly slandered immigrants, failed in an interview to distinguish the Iranian Quds Force (Tehran's military special forces) from the Iraqi Kurds (the most faithful U.S. allies in Iraq), mocked Sen. John McCain for having been captured and held as a prisoner of war in Vietnam and suggested that Fox News host Megyn Kelly took a harsh tone with him because she was menstruating. Through it all, his poll numbers have soared.

The thing to remember is this: Trump is not judged on his executive competence, nor expected to show anything resembling human decency. He is impervious to political criticism because he is not, in any recognizable way, a traditional politician. Openly disdainful of his opponents and their rote, measured rhetoric, he is a manic marvel. At this point, the only truly unforgivable thing Trump could do is slow down or become boring. And that, history suggests, is not much of a risk.

With this group, it shouldn't be much trouble. Fading stars like Kentucky Sen. Rand Paul are ripe for a fight and the attention it would generate. Middle-of-the-road contenders like Cruz and Sen. Marco Rubio (Fla.) might be more difficult to draw out, but Walker will be desperate to reverse his dire narrative — the one that says he's listless and tanking — and be ready to engage.

Simple enough and sure to entertain.

5. How will the surging Carson handle the spotlight?

The latest round of polling shows Carson emerging as a legitimate threat to Trump's primary primacy. According to a CBS News/New York Times survey from Tuesday, the famed neurosurgeon trails the frontrunner by only four points, with 23% to Trump's 27%. The late surge means Carson, who has mostly escaped serious media scrutiny despite consistently healthy numbers, is about to face more difficult questions.

It begins in Simi Valley. Carson has said a number of truly bizarre and, in some cases, deeply offensive things over the course of his campaign and in the years leading up to it. Unlike Trump, Carson is not inclined to make a spectacle of himself, but he is unmistakably brash. His ability to square past comments, like his assertion that "a lot of people who go into prison go into prison straight — and when they come out, they're gay," with something approaching reality will be tested.

6. Can Fiorina make the jump into the upper tier?

Like Trump and Carson, Fiorina has benefited from her status as a newcomer to national politics. She has never held public office, losing a 2010 race to unseat Sen. Barbara Boxer (D-Calif.). She left her most high-profile job as the first woman to run tech giant Hewlett Packard after effectively running the company into the ground.

In fairness, Fiorina took over at HP as the late 1990s tech bubble was poised to burst. If she can successfully pivot the discussion away from the unflattering statistics that have come to characterize her time there, Fiorina has proven herself a sharp and edgy debater. A repeat of her stellar performance in Cleveland, this time on a larger stage with more savvy candidates, could vault Fiorina past middling career politicians like New Jersey Gov. Chris Christie.

7. Does Rubio keep playing it safe, or does he try to grab headlines?

With the exception of his surprisingly hardline stance on abortion, Rubio has mostly flown under the radar during this long summer for establishment candidates. But if he can hang on long enough to see Trump and Carson fade, Rubio is well-positioned to challenge his mentor and fellow Floridian, Bush.

Rubio's most impressive achievement in this campaign has been to mostly steer clear of any direct confrontations with Trump. Though he's not trying to ride the billionaire's coattails like his colleague Cruz, Rubio has refrained from offering any pointed criticism. Logic says Rubio continues along that smoother road Wednesday night, keeping his focus on Hillary Clinton and President Barack Obama's foreign policy, of which he has been a vocal critic.