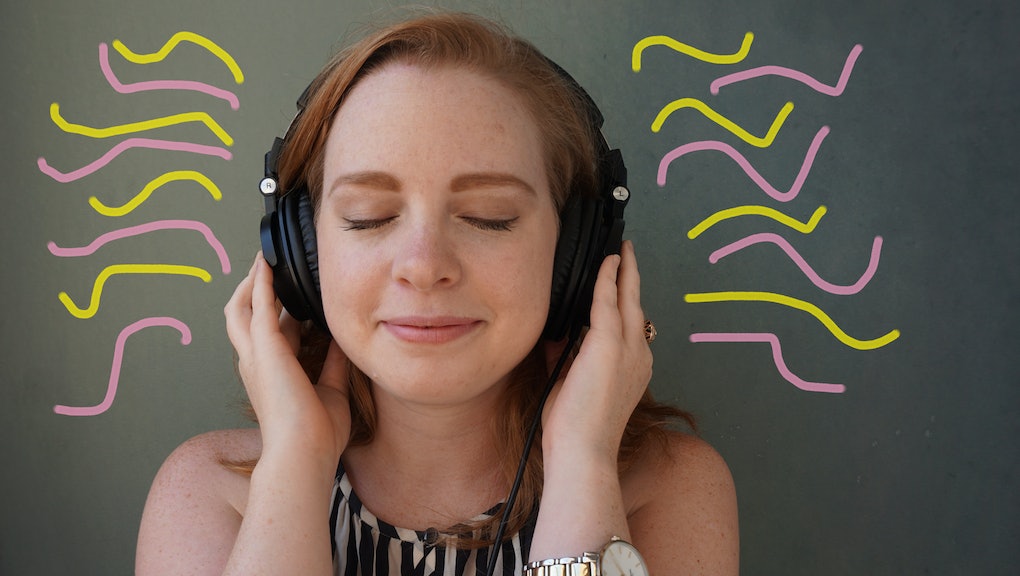 Do Meditation Apps Really Work? My Week on Headspace, the Gym for the Brain

I'm sitting in a cramped storage closet lit like an operating room, headphones plugged in, trapped by a cinderblock wall on one side and industrial metal shelving on the other. A soft-spoken British man is coaching me through a mental workout. He's telling me to sit back, relax and allow my body and mind to unwind.

"Take a moment to get comfortable," he says. I try to drown out the electric guitar in the next room, where a few of my coworkers are getting an impromptu demonstration. "With the next out breath, just gently close the eyelids, just feeling the weight of the body as it presses down against the chair below you," he says.

For the next eight minutes, my head feels like this.

I was trying to meditate. Meditation, like flossing or exercise, was always an enterprise I viewed wistfully. I saw it as monotonous and irritatingly sedate, even though I knew there were benefits beneath its routine and repetition. I knew because I had plunged myself into meditation a few times, always emerging on the other side better for it.

Though definitive findings for meditation's positive effects are still up in the air, a 2014 study published in the Journal of the American Medical Association had good news for practitioners. After examining 47 trials studying meditation programs, researchers found that mindfulness meditation, the kind promoted by Headspace, "had moderate evidence of improved anxiety, depression and pain."

But it was never enough. No matter how easily my mind cleared, I always let it go, telling myself it wasn't important and I wouldn't miss it anyway.

The problem lay in the effort it took to establish a routine — a deceptively large amount, I realized. As my mother continually reminded me, meditation needn't take up more than 10 minutes of my day. To my mind, though, that was 10 minutes of sitting still. It was unnecessary, disposable; I had gotten by without it, so why change now?

I meditated during the occasional yoga class, or if it occurred to me while riding the subway to and from work. Mostly, though, meditation lived as a conversation topic to which I would shrug my shoulders and offer a rueful explanation for my inability to stick with it.

Then it occurred to me that technology might be a workaround for my fecklessness. Like everything else in life, there are apps for meditation, and after speaking with a few trusted confidantes, I settled on Headspace, which bills itself as a personal trainer for the mind. Faced with a long week of red-eye flights and tight deadlines, I decided to take the bait.

How it works: Created by former Buddhist monk Andy Puddicombe and Rich Pierson, who used to work for the advertising agency Bartle Bogle Hegarty, Headspace promises meditation made easy.

The free introductory app contains the first "foundation," Take 10. It features a series of 10 short instructional episodes — 10 minutes each — designed for consumption at a clip of one per day. At the end of Take 10, users are asked to subscribe, at which point they will receive access to "foundations" two and three as well as specific meditative guides on things like health and relationships.

"I've talked to several people using Headspace," Catherine Kerr, a researcher in the cognitive neuroscience of meditation at Brown University, told the New Yorker in July. "They've all reported these hard-to-quantify benefits that have to do with attention, equanimity, alertness, and being able to deal with daily life."

Like any app worth its salt, Headspace's minimalistic design buttresses its mission. Taken together, the muted oranges, creams, navies and yellows, smooth transitions between segments, simple cartoon animations and bare-bones app icon — a large tangerine-colored circle set against a white background — gently remind you that you're here for serenity.

Then, of course, there's the dreamy-voiced narrator who walks you through Take 10. He told me in the beginning that his name was Andy (Puddicombe, I later realized) but I decided to call him Tim, because I thought it suited him better. Calm, conversational and unapologetically British, "Tim" sounded like an airline steward whose sole job in life was guide me through the clouds of my own consciousness.

For the most part, he did. Tim and I had a good rapport from the get-go. He was inside my mind but there to help, like a landlord puttering around with a broom and dustpan.

"I think very often we see external sounds as something sort of potentially gets in the way of a quiet mind," he tells me in the first episode. "But in this exercise, we're actually going to use these different sounds. For 10 or 20 seconds, just noticing all the different sounds going on around you right now."

"It makes a lot of sense, that idea of not needing to stop thoughts or change thoughts, or even judge thoughts," he says later, in episode three. "Instead, simply practicing the art of sitting on the side of the road, just watching, listening and allowing the mind to unwind in its own time and its own way."

He's a man for whom going with the flow is pivotal. Don't worry about reaching any kind of goal, Tim advises. The point is to just be, and to be aware of being.

After each episode, I was in a familiar place — the "Oh, this feels great. Why don't I do this more often?" place. I felt calmer, lighter and more aware of myself and the way I moved through the world. I meditated at work, at home and on the subway. I meditated with screaming children in my ear and I meditated in silence. I meditated when I was anxious and when I wasn't.

Yet my problem had been sticking with meditation, not getting something good out of it. On that front, Headspace edged out the competition — barely. I didn't use it every day, but I did remember to use it every few days.

Having structured, 10-minute blocks of time was helpful, but I'm still not all the way done with Take 10 despite the fact that I started a few weeks ago. I also haven't decided whether I'm going to subscribe to the all-access app (unlimited access sets you back $419.95, while a year costs $7.99 per month). What I will do, however, is take what I've learned with me. That's more than I can say for a meditation book or yoga class.

This is wellness in the digital age. The biggest crack I traced in Headspace's foundation was the very thing that attracted me to it in the first place: It was a piece of technology designed to clear the mind.

I'm not a technophobe. (I write about technology for a living, after all.) I use my smartphone and laptop just as much as the next person. More often than not, I side with the people who think the idea that technology is ruining the world is a crock of shit.

Tim tells me meditation isn't goal-oriented, but Headspace throws that idea to the wind.

However, there's an inherent contradiction in gaming something that is not supposed to be won. Make no mistake, Headspace is designed to give us a way to "win" at meditation: You can't unlock the next episode until you finish the previous one, and you can't jump up to foundations two and three until you finish Take 10. You're given progress updates and vital statistics, including how much time you've spent meditating and what targets you've hit so far.

Tim tells me in one episode that meditation isn't goal-oriented, but Headspace throws that idea to the wind.

It may be possible to use technology for open-ended activities like meditation. But our current technological ecosystem — one that turns everything into a task to be completed — doesn't leave much room for it.

Does it matter if it works? Admittedly, Headspace did make it easier to stick with meditation, which was my biggest problem of all. It wasn't perfect, but it was a start. Taking my Headspace guide at his word — that meditation is different for everybody, and different formulas and recipes and methods work differently for different people — made the gamification of meditation easier to swallow.

On the other hand, it's difficult to feel comfortable playing a game if its goals are continuously floating around ominously in the corner of your mind. I enjoyed Tim's company, and I like to think he enjoyed taking up residency in the cottony back rooms of my brain. Like any good airline steward or landlord, however, he has rules to enforce. I'm not sure I want to stay around long enough for that to happen.