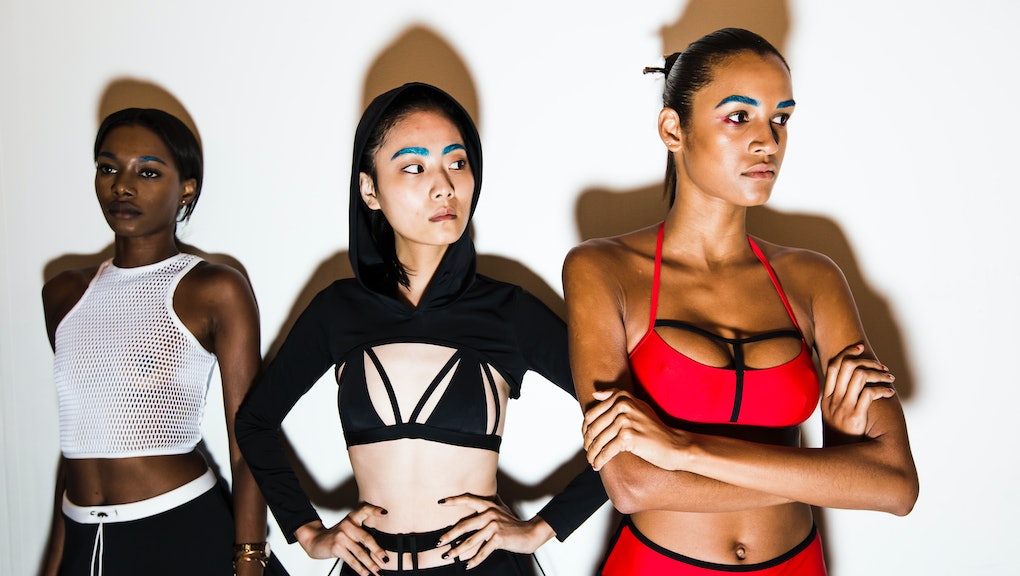 Chromat's Spring 2016 runway show during New York Fashion Week was remarkable for numerous reasons but perhaps the show's biggest feat had absolutely nothing to do with the clothes.

Instead, look at the models cast:

People who write and talk about fashion often toss around the word "diversity," by which they usually mean racial diversity. It's no secret that designer shows predominantly feature white or fair-skinned women with only a handful of models of color, if any at all.

To counteract that whitewashing, advocates in and outside the industry have pushed for greater inclusion of women of color. "Two, three, four [models of color] is nice. But not when there's 30 girls. I'm very pleased with any improvement, and I say that respectfully," Bethann Hardison, former model and founder of the Diversity Coalition, told Fashionista.

However, simply adding in a model here and a model there to bring up the count misses the real point of diversity. As Chromat demonstrated, true diversity is about true representation, so anyone of any color can see themselves in those runway photos.

And fashion is falling short.

Focusing exclusively on the numbers: Designers have been repeatedly called out for their homogenous casting choices. In 2013, Naomi Campbell, Bethann Hardison and Iman wrote an open letter citing designers with abysmal rates of casting models of color. The situation is worse in Europe, according to one top casting agent, who told E! News that designers in Paris and Milan go multiple seasons without ever using a model of color.

But when we cite these problems, it typically looks like a math equation. When the Fashion Spot issued their biannual Diversity Report this month, it came with pie charts. When Jezebel 's staff analyzed the runway models in 142 of the runway shows in 2014, it found that 78.69% of the models cast were white. (That's only slightly better than in 2013.)

"While that number is slightly smaller than last season, it still hovers around 80%, which has been roughly the percentage of looks worn by white models for the past six seasons," Jezebel reported.

While the starkness of raw numbers can be powerful, numbers are limited: The counts done by advocates and media are typically limited to mere head counts of who is "white" or "black."

"We know that racism is systemic, and we know that the racial divide is everywhere within our culture, but a creative industry like fashion should really reflect our society," Hardison said during a panel at this year's NYFW. Reflecting society is the key, said Hardison, because "the [runways are] where the ideas are introduced, from the silhouettes, the colors, the textiles, and the girls and the guys — it all happens there first."

Society isn't just made up of people who are "white" or "black."

What diversity should really mean: Real diversity doesn't mean upping a count of models of color, from 2 to 17. It means showcasing actual variety, which is the definition of diversity.

"We come in every shade known to man," one beautiful viral Tumblr post read, showcasing 36 different famous faces, all in different shades.

"Diversity head counts" rarely consider this variety. Instead, when they rely on mere show statistics, a few token women of color — regardless of their actual look — act as a check in a designer's diversity box. Even more common is for those few black models to be incredibly light-skinned, a problem of colorism in fashion and culture at large.

That's one reason Teen Vogue drew ire when it featured a fair-skinned model in a beauty story about Senegalese twists versus a model with a skin tone closer to that of native Senegalese women (who appeared in the background of photos accompanying the story online). It's also the reason Lupita Nyong'o has spoken out about representing women with darker skin, something she found missing as a child looking for examples.

In an interview with Glamour, Nyong'o recalled how in Africa, European standards of beauty pervaded the culture and made her doubt her own natural beauty:

When I was in the second grade, one of my teachers said, "Where are you going to find a husband? How are you going to find someone darker than you?" I was mortified. I remember seeing a commercial where a woman goes for an interview and doesn't get the job. Then she puts a cream on her face to lighten her skin, and she gets the job! This is the message: that dark skin is unacceptable.

That favoritism for lighter skin persists in modeling, as model Nykhor Paul has spoken out about.

"Once, in Paris, there were five black girls in the bathroom all fixing their makeup. That's what we have to do," Paul said in an interview with Cosmopolitan. "There has been progress, but my makeup shouldn't be special. It's normal. If you can do a really pale-skin girl flawlessly, then you should come to the other side of the spectrum and do a super dark-skin girl too."

Progress, though, is on the horizon:  The industry will only learn how to work with darker-skinned women — and women of all colors — once it lets them in and considers diversity for what it really should be.

Chromat wasn't the only design label to showcase real diversity: French designer Sophie Theallet's show during Fashion Week had a range of models from different racial and ethnic backgrounds, as did Kanye West, Diane von Furstenberg and Eckhaus Latta.

Now other designers just have to act upon that inspiration so that women everywhere can see themselves reflected on runways.

"Until I saw people who looked like me, doing the things I wanted to, I wasn't so sure it was a possibility," Nyong'o has said. She can't be the only girl who feels that way.