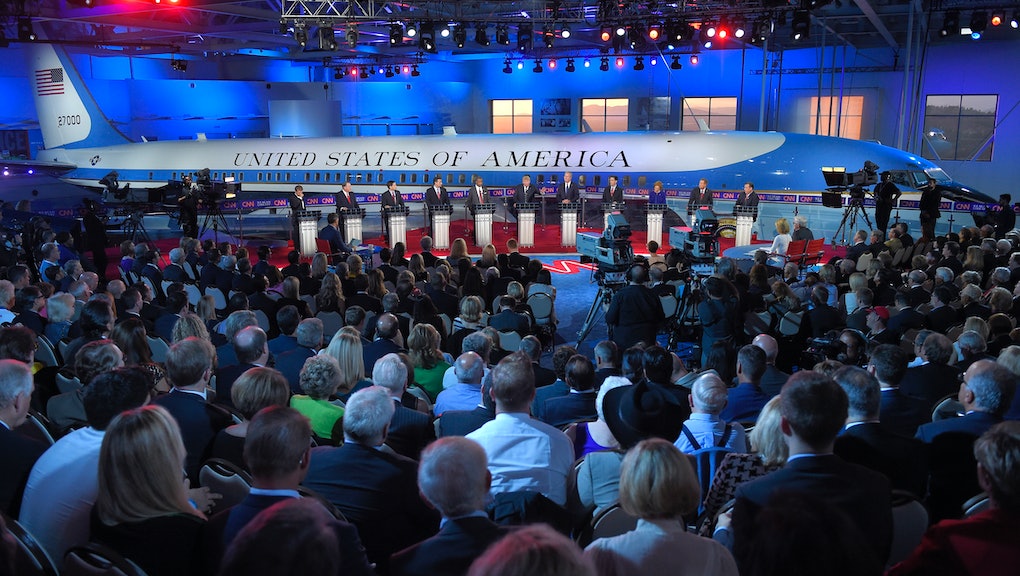 Simi Valley, California — The second Republican primary debate was held at a venue dedicated to the memory of a Republican icon who coined the "11th Commandment" — "Thou shalt not speak ill of any fellow Republican."

So much for that idea.

At the Ronald Reagan Presidential Library, a shining monument on a hill surrounded by plaster boulders, citrus trees and signs warning that the nearby scrub brush is a natural habitat for rattlesnakes, the largest debate in party history became a slugfest that would set Reagan spinning in his grave, conveniently located only a stone's throw from the debate stage itself.

Whether candidates were doubling down on insults against family members or slyly reminding voters of an opponent's past drug use, the debate descended into a rhetorical mud-wrestling match. This wasn't much of a surprise to anyone who had been watching CNN's promotional material in the weeks leading up to the debate, which marketed it as HBO might preview a prize fight between two boxers that had just been released from prison for pushing their elderly mothers down a flight of stairs.

As a CNN staffer told Mic during a walk-through of the debate stage (the installation of which was rumored by campaign staffers to have cost $300,000), the podiums were specifically placed close enough together to spark conflict between the participants: "These candidates will literally feel the presence of their opponents beside them."

By the end of the night, it became clear that the debate's sole female candidate was also its most professional candidate. Former Hewlett-Packard CEO Carly Fiorina was nearly excluded from the primetime debate altogether for failing to pass polling muster. Her opponents likely wish that had been the case.

The debate: The event was inevitably going to feature nasty moments between the candidates; billionaire frontrunner Donald Trump was always going to drag down the level of discourse. In the weeks leading up to Wednesday, Trump had attacked former Florida Gov. Jeb Bush for being "low-energy," second-place candidate Dr. Ben Carson for being "an OK doctor" and Fiorina for her looks.

But even the most pessimistic debate-watchers were surprised by the thinness of the substance in the primetime slugfest on Wednesday night, even from candidates with unimpeachable political résumés. Nearly every exchange of note that occurred between the invited candidates featured a juvenile insult, a rolled eye, an interruption or an outright lie about an opponent's record.

Initially, the assembled crowd of Republican luminaries and political reporters reacted to the combative atmosphere in much the same way as fans at a boxing match: gasps when Trump mocked Sen. Rand Paul's stature by not mocking his stature, boos when his remarks about Fiorina's looks were brought up by host Jake Tapper, cheers when Fiorina delivered a knockout rejoinder to the comments.

But as the 11-person debate creaked on for three excruciating hours, the assembled party faithful and political skeptics grew quieter. A prolonged exchange about the long-settled issue of a link between vaccines and autism drew groans, then silence, as Carson, a world-famous pediatric neurosurgeon, was forced to tread the line between proven medical science and the incoherent anti-vaxxer ramblings of the Republican Party's frontrunner.

"This is fucking ridiculous," a Simi Valley police officer working the event grumbled to no one in particular.

Tapper's poorly executed moderation strategy did little to help matters. Tasked with corralling 11 candidates nearly single-handedly, the network's chief Washington correspondent was frequently overridden by exuberant candidates hoping to get a last word in edgewise. Meanwhile, CNN chief political correspondent Dana Bash and guest host Hugh Hewitt, who had both asked incisive questions of the undercard debaters, might as well have been relaxing in the green room for all the viewers saw of them.

"I was really disappointed with the moderating," Sarah Huckabee, daughter of former Arkansas Gov. Mike Huckabee and a campaign spokeswoman, said after the debate. "They did a poor job with keeping the candidates on time. Certain candidates they just let run all over them, other candidates they were a lot more forceful. The discrepancy in the time is outrageous for a three-hour debate."

Although some in the press room grumbled that Fiorina's equanimity belied ultra-conservative positions that include criminalizing abortion and reigniting the Cold War, the candidate's obvious passion for her extreme positions appeared to endear her to the crowd. Fiorina spoke emotionally of losing her daughter to drug addiction, and made the most vivid argument against access to abortion the campaign has yet seen, daring her Democratic opponents to "watch a fully formed fetus on the table with a heart beating and legs kicking while someone says, 'We have to keep it alive to harvest its brain.'" (Although it's less of a killer line if you know it isn't true.)

As moderators focused on Trump and his sparring partners, Fiorina, who had to fight her way to even be included in the primetime debate, didn't give up her speaking time easily, interrupting or speaking over attempts by the moderators to cut her off more than any other candidate.

She also came the closest to actually wounding Trump, who still managed to walk away from the debate with more speaking time than any other candidate. With a critique of his alleged mismanagement of four Atlantic City casinos, Fiorina accused Trump of running up "mountains of debt, as well as losses, using other people's money. Why should we trust you to manage the finances of this nation?" Trump, visibly thrown, failed to address the casino closures beyond his now-familiar defense of his utilization of bankruptcy law.

The debate's attendees were left unsatisfied. Pouring out from the makeshift auditorium-slash-aircraft hangar where the debate had been held, the Republican elite who had witnessed the debate in person appeared slightly stunned by the debate's length and breadth.

"It was very... long," an elderly woman in a lime-green cardigan told Mic. "I think the first debate had a little bit more substance, but overall I think it was alright," said a gentleman wearing what appeared to be a Confederate battle flag tie.

None of the attendees volunteered which candidate they supported, or whether the debate had changed their minds, but by the end of the debate, conventional wisdom among political observers had coalesced around the notion that Fiorina's performance was the strongest of the night.

Whether her strong showing was enough to lure the party base away from Trump remains to be seen.